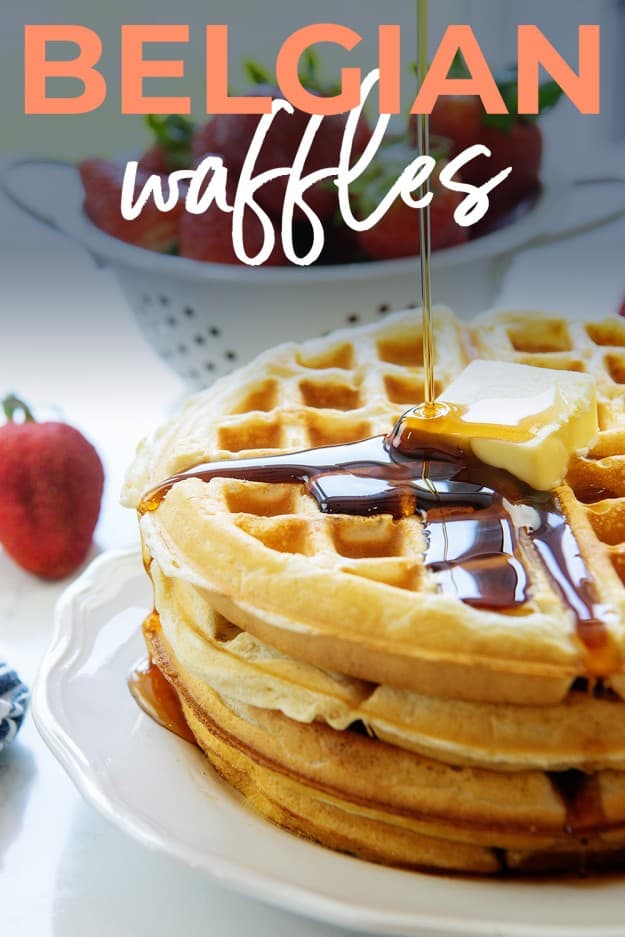 The Best Belgian Waffle Recipe has a crispy exterior and light, fluffy interior! These waffles rival any that you’d find at your favorite breakfast restaurant!

People don’t say breakfast is the most important meal of the day for no reason, you guys.

It’s because waffles exist and waffles are important. 😉

Those frozen waffles are fine in a pinch, but oh goodness, nothing beats a homemade Belgian waffle with a crisp exterior and deep pockets full of maple syrup and melted butter.

Our Belgian waffle recipe just melts in your mouth and if you’re not stopping what you’re doing to head to the kitchen RIGHT. NOW. you are missing out!

But enough about my love for the best Belgian waffle recipe to exist…let’s just get to the good stuff so you know how to make them too! You and your family are going to love this one and I won’t make you wait a minute longer.

Be sure to try our Biscuit Donuts and Monkey Bread too. We love all these breakfast treats!

Flour – We use all purpose flour, but a combo of white and whole wheat would likely work, if you don’t mind a heavier texture.

Cornstarch – This helps keep the waffles crisp on the outside and light and airy inside.

Spices – We add vanilla, cinnamon, nutmeg, and a bit of salt to the batter for flavor.

Baking Powder & Baking Soda – Both work to make the waffles light and airy.

Buttermilk & Milk – We use a combo of both here. No buttermilk? Just add a teaspoon of vinegar to milk and let it sit for 5 minutes. Instant buttermilk!

Egg – You’ll need to separate the white from the yolk for this one, but we’ll use the whole egg.

Sugar – Just a touch of sweetness.

“My family has been on a waffle making odyssey – and after a dozen or so recipes, I think we can stop searching!!! Yes, the egg is a bit more work than most recipes, but it’s definitely worth it for the airy texture. These are crisp and light with a pinch of that cinnamon flavor. Two thumbs up from my whole family!” – Leigh S.

Waffle Iron – We use and recommend this waffle iron. Easy to use and fairly budget friendly. We’ve had ours over 10 years now.

Electric Hand Mixer – It’s so easy to whip up dessert (or in this case, breakfast) with this cute hand mixer. It doesn’t take up much space and is a must for any kitchen!

Rotating Hand Whisk – If you don’t have an electric mixer one of these rotating whisks works pretty well too without the need for any electricity.

How To Make Belgian Waffles:

Whip: To start, we’re going to whip an egg white. I KNOW. I hate whipping egg whites. I promise you, this is 100% worth it and is the key to this recipe.

If you have a hand mixer, drag it out and start whipping.

Combine: Once your egg whites are whipped to stiff peaks, you’ll stir together the rest of the Belgian waffle batter and, once combined, fold in those whipped egg whites.

One of the secret ingredients here is cornstarch. It helps to make the waffle crispy on the outside and the whipped egg white makes it light and airy inside. That’s why this is the best Belgian waffle recipe!

Cook: Let your waffle iron preheat for a few minutes and spritz it with nonstick spray.

Every waffle iron is different and some will cook faster than others. Mine takes about 3 minutes. I generally just look for the steam to stop coming out of the iron and that’s when I know they’re done.

Serve: As you cook these waffles, pop them right onto the rack of a warm oven. They’ll stay nice and crisp and everyone can enjoy breakfast at the same time this way. Genius, right?

Leftover waffles freeze great! Just place them on a sheet pan in a single layer and freeze for one hour. Place in a zip top freezer bag, squeeze out as much air as possible, and freeze for up to 3 months. Reheat in a 325 degree oven for 10 minutes or until warmed through.

How many waffles does this make?

Great question, but the answer is…it all depends on your waffle iron. Some are larger than others and it’ll really all depend on that. The waffle iron I linked above is large enough that this recipe makes 3 large waffles.

I have another smaller iron that makes 4 waffles. It never hurts to double the recipe, just freeze any extra waffles for later and reheat in the oven!

Can you store waffles for later?

Yes, you can refrigerate or freeze them for later! They’ll last in the fridge for about 2 to 3 days and in the freezer for up to a few months. To freeze, first place them on a baking sheet and flash freeze before transferring to a sealed bag or container. It also helps to separate them with parchment paper.

We think our Belgian waffle recipe is pretty perfect just the way it is, but my kids do have fun sprinkling in other ingredients. Makes for a fun breakfast!

We love a classic Belgian waffle topped with a pat of salted butter and a drizzle of pure maple syrup, but it’s also fun to get creative. Here are a few ideas to get you started:

This is the best Belgian waffle recipe we've ever tried at home. The waffles are crispy on the outside and light and fluffy on the inside. It beats restaurant waffles any day of the week!
4.90 from 29 votes
Print Pin Save Saved!
Prep5 minutes
Cook15 minutes
Total20 minutes
Serves 4 waffles

This recipe makes 3-4 waffles in my Belgian waffle maker. The number of waffles may vary depending on your waffle maker.

This recipe was lightly adapted from Fine Cooking.

This post was originally published in May 2012. It was updated in March 2019 with new photos and a video. Old photo below:

END_OF_DOCUMENT_TOKEN_TO_BE_REPLACED

You’ve got 30 minutes! Make it count with these kid-friendly favs.
END_OF_DOCUMENT_TOKEN_TO_BE_REPLACED

Baby, it's cold outside! And busy inside. Let's keep dinner simple with these crockpot favorites!
END_OF_DOCUMENT_TOKEN_TO_BE_REPLACED