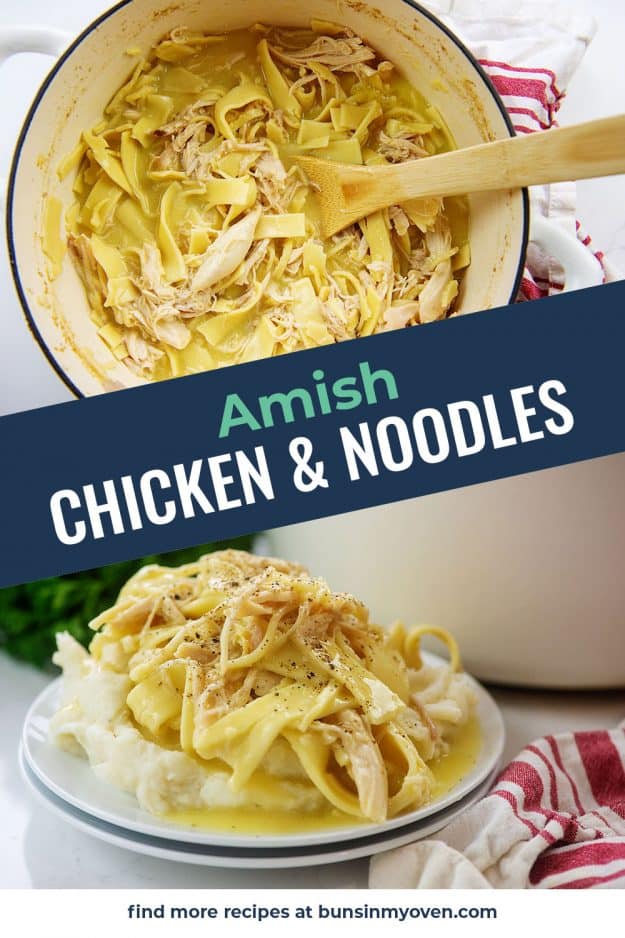 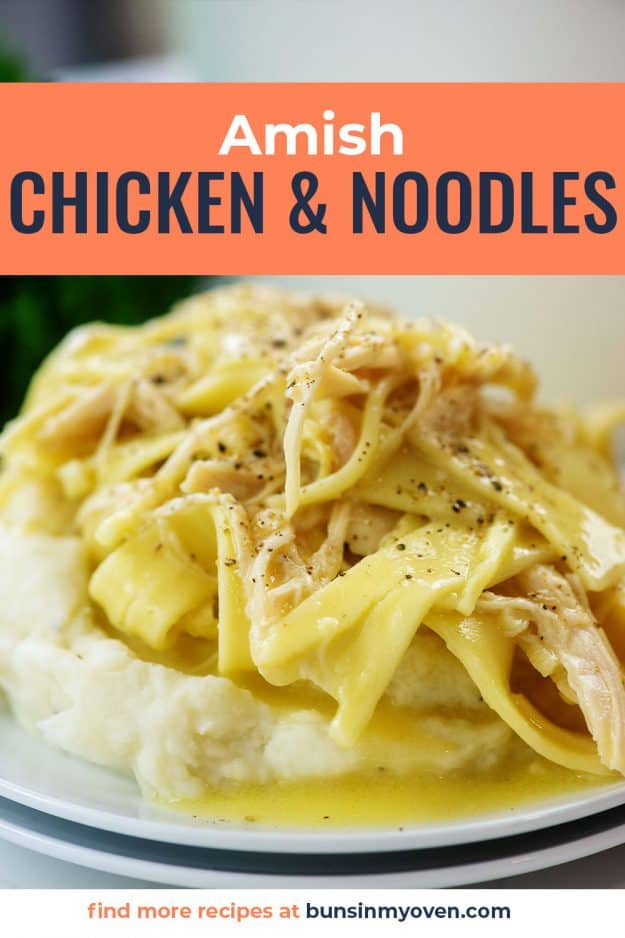 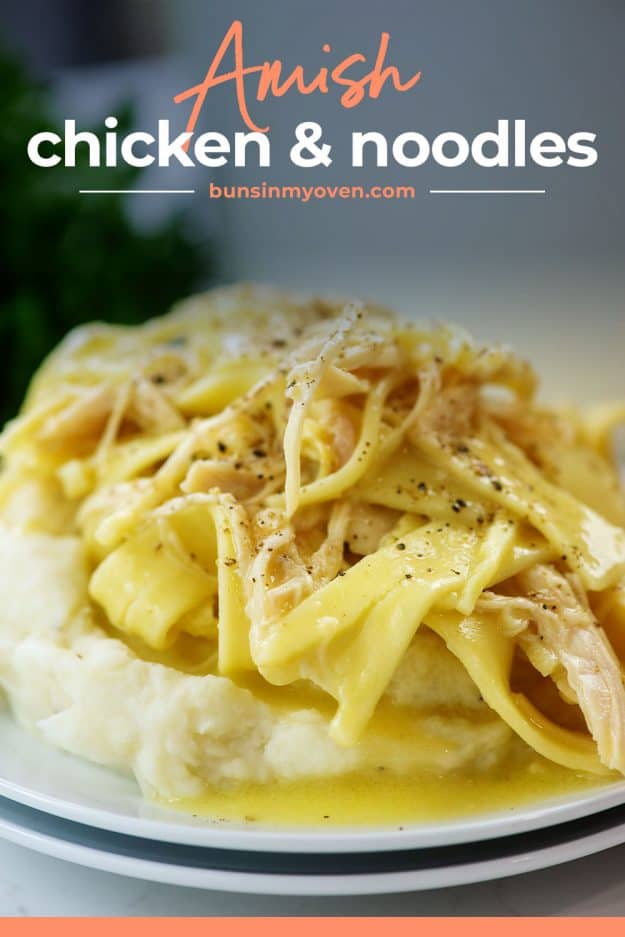 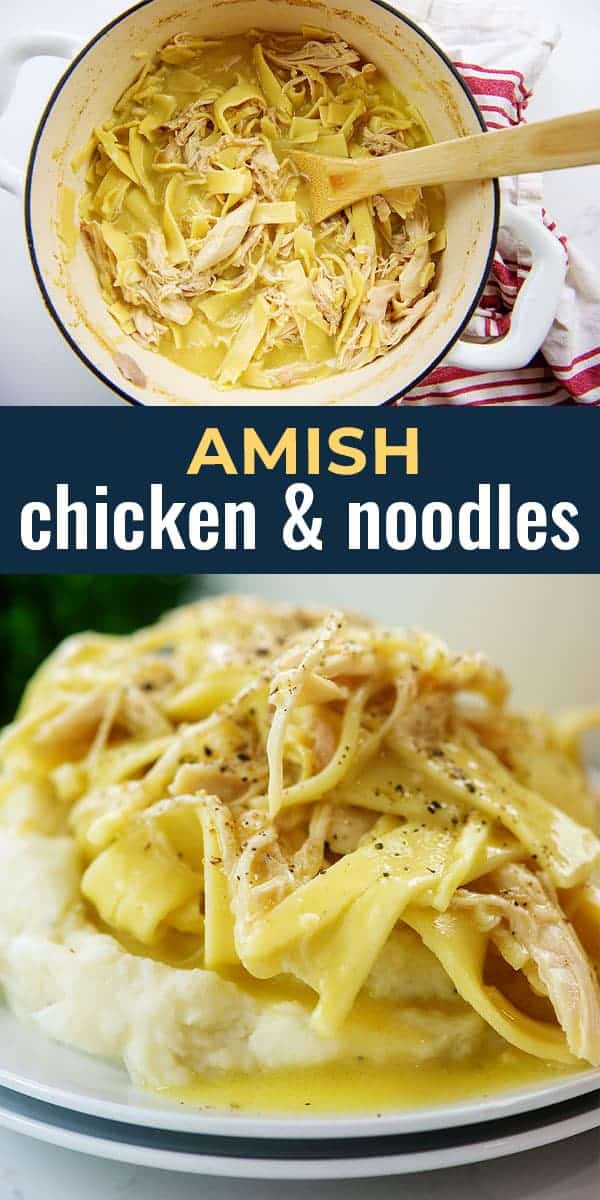 Our AMISH CHICKEN AND NOODLES are the ultimate comfort food! Amish egg noodles and tender chicken, in a thick, rich broth just begging to be served over a pile of mashed potatoes!

We often joke that my son is actually an old man.

His favorite restaurant was Bob Evan’s for most of his childhood. He often requests the same meals that my grandpa would request. He just really loves good old fashioned comfort food. And, of course, he’s always happy to eat dinner at 4pm. 😉

Anyway, this is one of those comfort food meals that he absolutely loves.

Amish Chicken & Noodles are NOT a soup – these noodles are bathing in a thick, rich sauce that you’ll serve over a pile of mashed potatoes for the ultimate cozy dinner.

We simmer a whole chicken until the meat shreds apart, we cook the noodles in that chicken stock, and then we stir in some cream of chicken soup to thicken it all up. <— Yes, the Amish use cream soups from a can, but you can use my homemade version if you prefer.

This recipe is a riff on our Amish Egg Noodles. We just added chicken, made them a bit thicker and creamier, and served them over mashed potatoes – just the way we’ve had them in Amish country!

This meal is already a carb lover’s dream come true, but go ahead and serve these with our homemade biscuits and you’ll really be living it up.

Whole Chicken – Around 4 pounds is a good size.

Chicken Broth Base – This adds loads of flavor to the stock. We always have a jar in the fridge. Find it on Amazon.

Egg Noodles – We buy the bags of thick, Amish or homestyle egg noodles. These are dried and found near the pasta in the grocery store. Here they are on Amazon.

Cream of Chicken Soup – You can use the cans of soup or make my substitute for cream of chicken soup.

Simmer: Start by adding the chicken to a large stock pot with the celery, onion, chicken base, water, and parsley. Turn the heat up until it is boiling and then reduce it to a simmer and cover the pot. Allow the chicken to simmer for at least 2 to 3 hours.

Tip: The longer the chicken simmers, the more flavor the broth will have. It’s worth the time!

Shred: When the chicken has finished cooking you can remove it from the stock pot and begin to separate the meat from the bones and shred into smaller pieces. Set the chicken aside for now.

Strain: After removing the chicken from the broth, use a strainer to separate the broth from the celery, onions, and parsley. These won’t be added back into the soup, they were just there for flavor and can be discarded.

Once strained, pour four cups of the broth back into the pot and return it to a boil.

Noodles: Once the broth is boiling you can add in the egg noodles and finally return the shredded chicken back to the broth. Stir well, cover the pot, and turn off the heat. The noodles will continue to cook, and should take about thirty minutes, while stirring every ten minutes.

Tip: Test the noodles before moving on to the next step to make sure they are cooked through. If not, turn the heat back on for a couple of minutes or until they are tender.

Finish: Almost done! There are just a few ingredients left that will really ramp up this soups flavor. Add the cream of chicken soup and butter and stir well until it has all melted and is well combined. Season with salt and pepper to your taste and finally, serve! 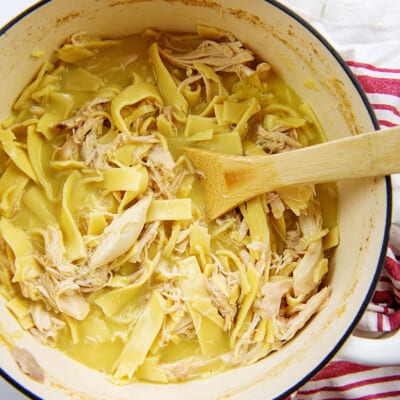 Egg noodles and chicken cook together in a rich broth until nice and thick. This Amish classic is best served over a pile of mashed potatoes.
5 from 1 vote
Print Pin Save Saved!
Prep15 minutes
Cook1 hour 30 minutes
Serves 8

We use the Amish style egg noodles found in small bags. These are generally made by smaller brands in plastic bags with zip ties at the top. You can also find them on Amazon.

END_OF_DOCUMENT_TOKEN_TO_BE_REPLACED

You’ve got 30 minutes! Make it count with these kid-friendly favs.
END_OF_DOCUMENT_TOKEN_TO_BE_REPLACED

Baby, it's cold outside! And busy inside. Let's keep dinner simple with these crockpot favorites!
END_OF_DOCUMENT_TOKEN_TO_BE_REPLACED