This old fashioned cake donut recipe creates cake donuts that are crispy on the outside and give way to a perfectly soft and cakey center, making these an amazing breakfast treat! We grew up eating these and they’ll always be a treasured family favorite.

Oh my word, you guys. I know that I gave myself the title of donut (doughnut?) queen, but really, the title goes to my grandma. I’m just the donut princess.

My grandma created the best dang cake donut recipe ever and I’ve been dying to share it with you. Anytime I make these, I get shot straight back to my childhood.

Visiting my grandma on vacation, waiting impatiently for her to fry up these unbelievable donuts, and then eating them until I’d make myself sick. She would often serve the donuts plain, straight from the fryer.

I prefer them tossed in a mixture of cinnamon and sugar, but powdered sugar or a glaze works great as well.

“Very simple but great tasting recipe. I drained the donuts on racks that were placed in paper towel lined cookie sheets.” – Mary

These are cake donuts, which means there is no waiting on yeast to do it’s thing.

Instead, the donuts have baking powder in them to help them rise.

You’ll love these donuts. I’m telling you – better than bakery donuts, by far!

How to make fried cake donuts:

Use a stand mixer with a dough hook to beat together butter, sugar, and egg.

Roll the dough out on a floured surface trying to make it a consistent thickness about 1/4″ thick. Use a donut cutter to cut the donuts.

Add the donuts to a pot of oil that is 375 degrees F. Add in as many as will fit without crowding the pan. Fry until golden which should take about 2 minutes on each side at the recommended temp.

When you remove the donut from the fryer, drain on a paper towel lined plate.

Invest in a thermometer!

I know many people don’t like to fry, so here are my best tips. Invest in a thermometer! They cost about five dollars and are worth every penny.

You want to keep your oil at a consistent temperature so that your donuts don’t get too greasy. Greasy donuts means your oil isn’t hot enough! 375 degrees is perfect for these donuts.

After you’ve fried the donuts, you can keep the oil covered for a week or two and use it for frying other foods.

Use the leftover oil to test out our biscuit donuts or potato donuts next!

If you don’t think you’ll re-use the oil, just let it cool completely and then use a funnel to pour it right back into your empty oil container or an empty milk jug. I try to keep a few empty milk jugs under my kitchen sink or in my pantry for used up oil.

Close the jug up tight and then toss it in your garbage can on garbage day. It’s a pretty simple way to deal with all that leftover oil! 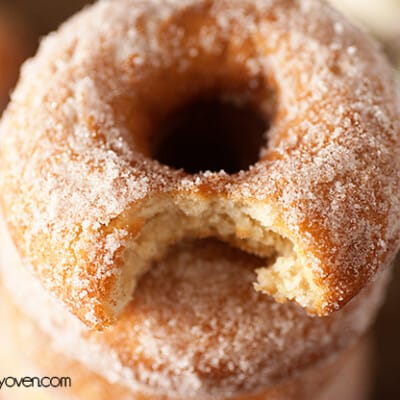 This recipe from my grandma is an all time favorite! I’ve changed it just a bit by swapping out the shortening for butter, but you can certainly use shortening if you prefer. If you don’t have a stand mixer, you can mix everything by hand and knead the dough on a floured surface.
4.59 from 12 votes
Print Pin Save Saved!
Prep10 minutes
Cook10 minutes
Total20 minutes
Serves 12 donuts

END_OF_DOCUMENT_TOKEN_TO_BE_REPLACED

You’ve got 30 minutes! Make it count with these kid-friendly favs.
END_OF_DOCUMENT_TOKEN_TO_BE_REPLACED

Baby, it's cold outside! And busy inside. Let's keep dinner simple with these crockpot favorites!
END_OF_DOCUMENT_TOKEN_TO_BE_REPLACED