Looking for a donut recipe without yeast? I’ve got you covered with these BAKED DONUTS! You’ll have donuts in less than 30 minutes and with our special trick, they’ll taste like they were freshly fried with a crisp, sweet exterior and soft, fluffy interior!

It appears that I have a problem.

I’m not sure how it happened. I’ve never been a donut person. I honestly only buy bakery donuts a few times a year.

Yet, when you do a quick search for the word “donut” on my blog you are met with multiple pages of donut recipes.

I’m also unable to pass up a donut shop without stopping in to test out a few of their specialties. Donuts have definitely become one of my favorite things.

Ingredients for Donuts Without Yeast:

Flour – All purpose or white whole wheat are great here.

Sugar – Both granulated and brown sugar.

Spices – We’re using a mix of nutmeg and cinnamon to make these all warm and cozy spiced.

Buttermilk – No buttermilk? Just add a scant tablespoon of white vinegar to regular milk and let sit for 5 minutes to sour.

Melted Butter – Both in the batter and the coating!

“For a baked, no yeast donut, this recipe is awesome! I was really craving donuts but I didn’t want to leave the house, nor did I want to worry about yeast or a fryer, and this recipe really did the trick. I put the batter in a muffin tin because I don’t have a donut tin. Still turned out great, just with a muffin shape” – Calista

Make the batter: Mix your flour, sugar, baking powder, nutmeg, cinnamon, and salt together in a large bowl. In a smaller bowl, add your buttermilk, eggs, vanilla, and melted butter then beat to combine. Add the wet to the dry ingredients and stir well.

Spoon into pan: We’re using a donut pan to make perfectly shaped donuts. No pan? Use a mini muffin tin and call them donut holes! 😉

Grease the pan well and then spoon the batter in evenly.

I didn’t expect to use a donut pan nearly as often as I do, but the kids love baked donuts and I love how easy and fun they are. This pan is a must!

Bake: The donuts take about 10 minutes in the oven. When they’re fully cooked, the top of the donut will spring back when lightly pressed.

Cool: Let them cool in the pan for a few minutes or you’ll risk them falling apart as you take them out of the pan.

Coat the donuts: Now for my favorite part! Add melted butter to a small bowl. Add brown sugar, granulated sugar, and cinnamon to a second small bowl. Dunk each donut first in the butter and then into the cinnamon sugar. 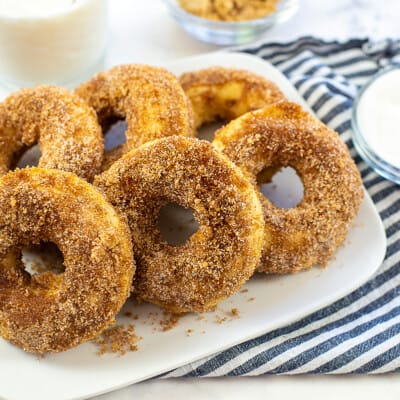 These fluffy, baked donuts are delicious all on their own, but when you dunk them in melted butter and roll them through cinnamon and sugar they are just plain amazing.
5 from 3 votes
Print Pin Save Saved!
Prep5 minutes
Cook8 minutes
Total13 minutes
Serves 12 donuts

END_OF_DOCUMENT_TOKEN_TO_BE_REPLACED

You’ve got 30 minutes! Make it count with these kid-friendly favs.
END_OF_DOCUMENT_TOKEN_TO_BE_REPLACED

Baby, it's cold outside! And busy inside. Let's keep dinner simple with these crockpot favorites!
END_OF_DOCUMENT_TOKEN_TO_BE_REPLACED