CROCKPOT SPIRAL HAM is the perfect mix of sweet & salty! This ham is so tender and juicy since it cooks in the crockpot and it’s super easy too! Serve this up at your next holiday dinner for a special treat. 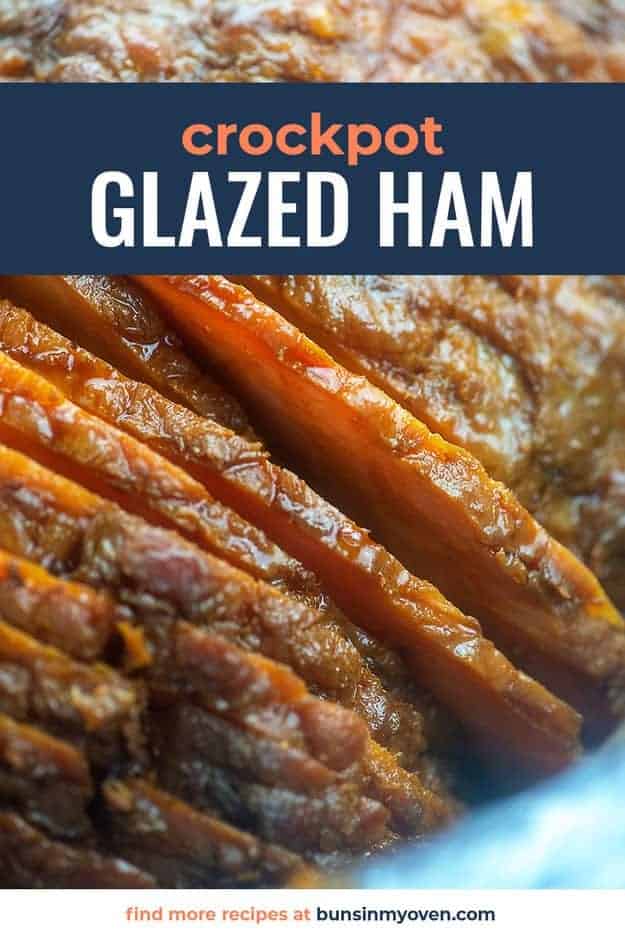 My husband and I are on opposite sides of the fence when it comes to meat…I like it to have a bit of a sweet side. Not like SUGAR sweet, but just a nice mix of sweet and salty. Like barbecue sauce or crock pot honey garlic chicken or grape jelly meatballs. Or a honey glazed ham!

My husband, on the other hand, thinks meat should have no hint of sweetness. I regularly make pulled pork sandwiches and he eats it with zero barbecue sauce, which I just think is wrong. 😉

Anyway, I usually take turns on the ham. The ham is glazed for Christmas, but not for Easter.

Ahh, marriage. Who’d have thought it be full of compromises about ham?

Anyway, the kids and I absolutely LOVE this crockpot spiral ham with a simple honey and brown sugar glaze. It’s so juicy and tender, thanks to cooking the slow cooker!

How to cook a spiral ham in the crockpot:

The size of ham you purchase will depend on the size of your crockpot and the number of people you’re feeding.

I almost always go for a larger size than I need, because we love leftovers! 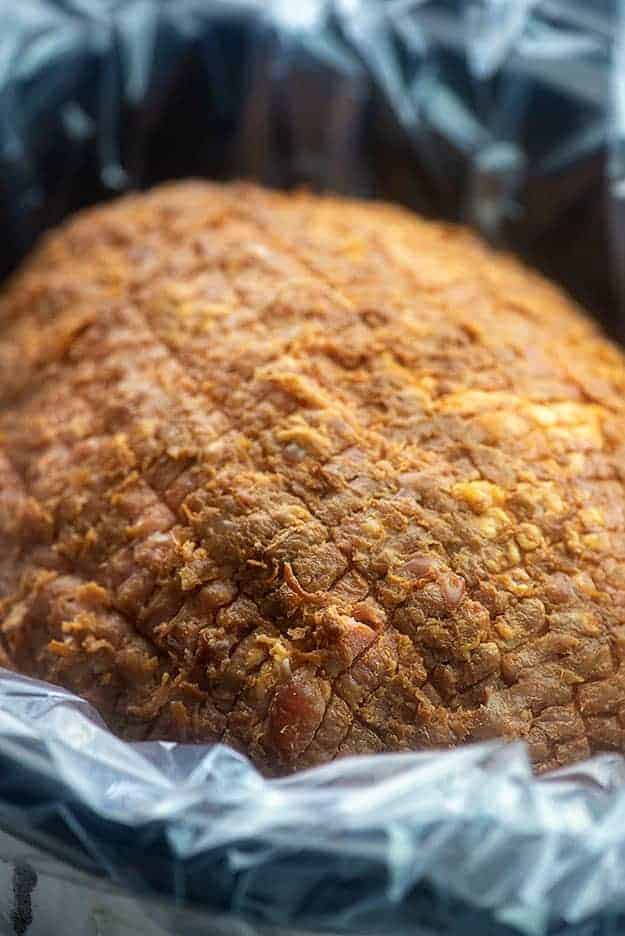 I use crockpot liners to keep clean up easy here. There will be honey/sugar in your slow cooker for a few hours and that can cause a bit of a sticky mess, so using the liner is really recommended here.

Line your crockpot, put your spiral ham inside, and set the pot to low.

Add butter, honey, and brown sugar to a small sauce over low heat and melt it together.

Once that sweet glaze is all combined, brush it over the top of the ham liberally. 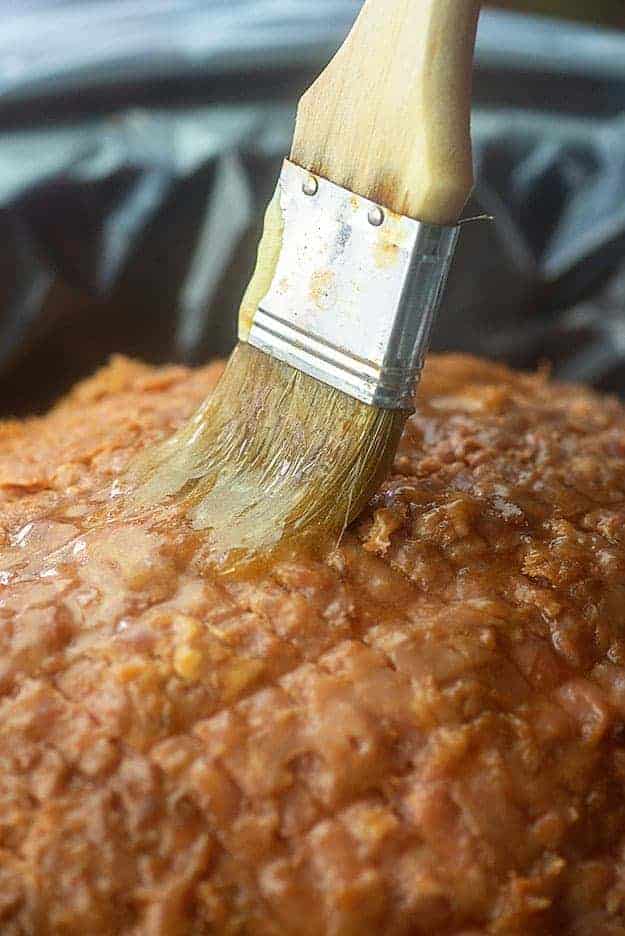 I like to brush the ham with the glaze about every 30-45 minutes, but this will totally depend on how much glazed flavor you’d like. If you go longer in between, you certainly aren’t going to ruin your ham.

The crockpot brown sugar ham should be heated through and beautifully glazed in about 5 hours for an 8-10 pound ham. It takes a bit more time than you might expect, because opening the lid to glaze the ham does release a fair amount of heat each time. Your ham may cook quicker if you glaze less often.

Test the internal temperature with an instant read thermometer. Your fully cooked ham should be heated to 140 degrees before serving.

The key is to be sure that it will fit within your crock pot. For my 6 quart crockpot, I try to stay around 5-8 pounds of ham.

If you do get your ham home and find that it’s a bit too large for you to get the lid on your slow cooker, just use foil to tightly cover.

The crockpot is magic when it comes to making ham nice and tender, so I think you’ll enjoy either bone-in or boneless.

What to serve with crockpot brown sugar ham:

Ham is easy enough for dinner any week of the year, but we tend to save it for holiday dinners for some reason. A few of our favorite holiday side dishes include Brussels sprouts with bacon, cheesy hashbrown casserole, broccoli cheese casserole, and creamy cucumber salad. Scalloped corn and Snickers apple salad are two recipes that we make for just about every holiday.

Chess pie is always a hit for dessert. 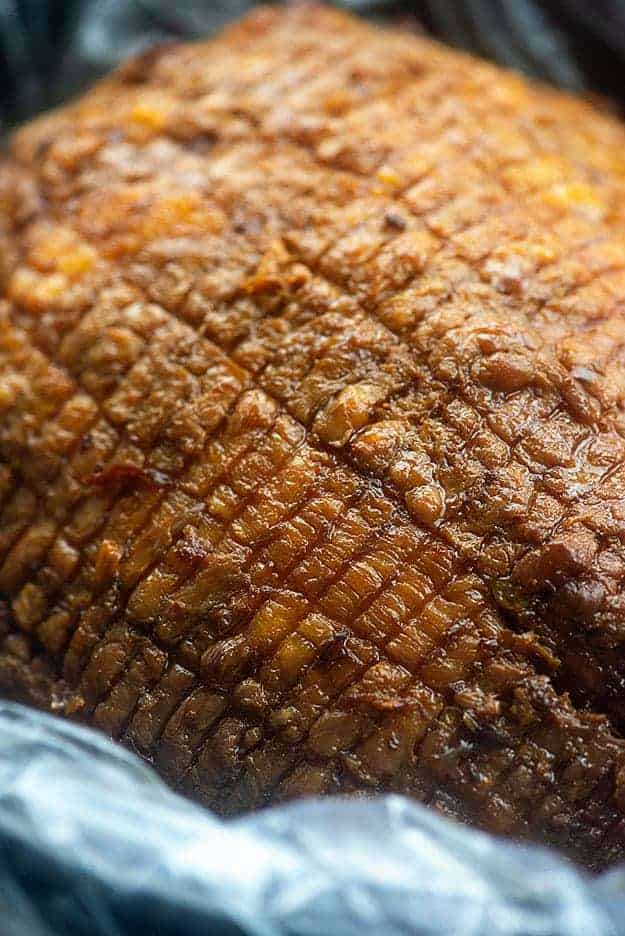 This spiral sliced ham is so easy to make in the crockpot and it comes out so juicy! We baste it with a mix of honey, butter, and brown sugar to amp up that sweet and salty flavor I love.
Print Pin Save Saved!
Prep10 minutes
Cook5 hours
Total5 hours 10 minutes
Serves 12 servings

You may use bone-in or boneless ham, but be sure it will fit in your slow cooker. If it's too large to close the lid, you may cover the pot tightly with foil.

END_OF_DOCUMENT_TOKEN_TO_BE_REPLACED

You’ve got 30 minutes! Make it count with these kid-friendly favs.
END_OF_DOCUMENT_TOKEN_TO_BE_REPLACED

Baby, it's cold outside! And busy inside. Let's keep dinner simple with these crockpot favorites!
END_OF_DOCUMENT_TOKEN_TO_BE_REPLACED