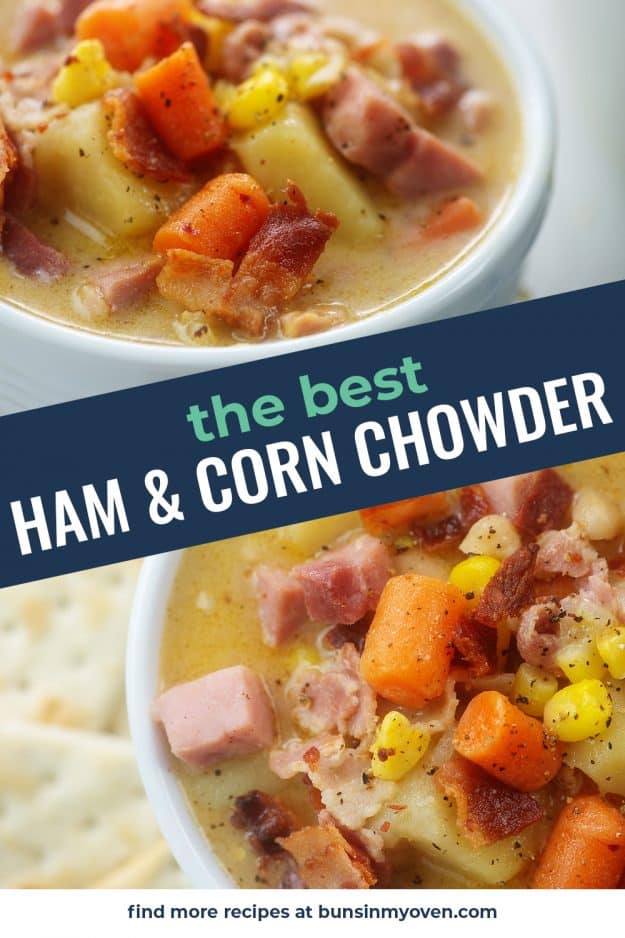 This HAM AND CORN CHOWDER is rich, creamy, and comforting! It’s the perfect recipe to warm you up this winter with lots of ham, corn, beans, potatoes and bacon!

I’m curious – do you eat soup all year long or do you mostly save it for the winter months?

We eat it all year long, but we definitely amp up the soup consumption when it’s cold outside.

Nothing better than a cozy bowl of soup (or chowder!) on a chilly night.

(My crockpot chicken noodle soup is one of those super cozy soups I’m obsessed with.)

This ham and corn chowder is perfect for a cold day. It’s made with ham, bacon, potatoes, and corn. Loads of flavors that the whole family loves.

Plus, it’s a great way to use up any leftover ham you might have hanging around!

Sauté: In a large dutch oven begin by cooking the bacon and onion on medium heat until translucent. Next add the carrots and garlic and cook for a couple more minutes. The bacon, onion, and garlic will add a ton of great flavor to this chowder recipe!

Boil: Next add the potatoes and the chicken broth and bring to a boil. It should really start smelling good now! When the contents have reached boiling, reduce the heat to a simmer and cook for ten minutes, stirring occasionally.

Simmer: Add the ham, corn, beans and the Old Bay seasoning to the pot and allow it to simmer for an additional ten minutes or until the potatoes are tender. Almost done!

To turn this into a rich, creamy chowder whisk in the milk and flour. Increase the heat to boiling and cook for a couple more minutes while stirring continuously, or until the soup has thickened to your liking.

Serve: Once the soup has thickened to your preferred consistency, remove from heat and serve. If you want to go the extra mile serve it with crumbled bacon and green onions! 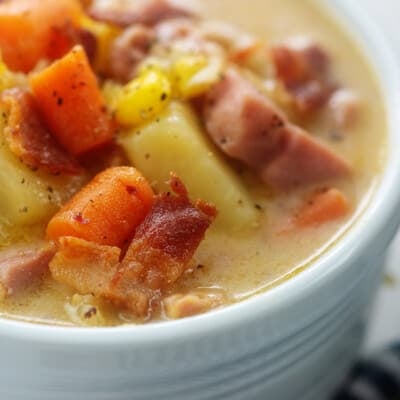 Loaded with ham, potatoes, bacon, and corn, this chowder is a hearty soup that's cozy and comforting. We like to use leftover ham, but the packages of diced ham also work well here.
Print Pin Save Saved!
Prep15 minutes
Cook45 minutes
Total1 hour
Serves 6

This soup is great with leftover ham, but the packages of diced ham work great as well.

END_OF_DOCUMENT_TOKEN_TO_BE_REPLACED

You’ve got 30 minutes! Make it count with these kid-friendly favs.
END_OF_DOCUMENT_TOKEN_TO_BE_REPLACED

Baby, it's cold outside! And busy inside. Let's keep dinner simple with these crockpot favorites!
END_OF_DOCUMENT_TOKEN_TO_BE_REPLACED