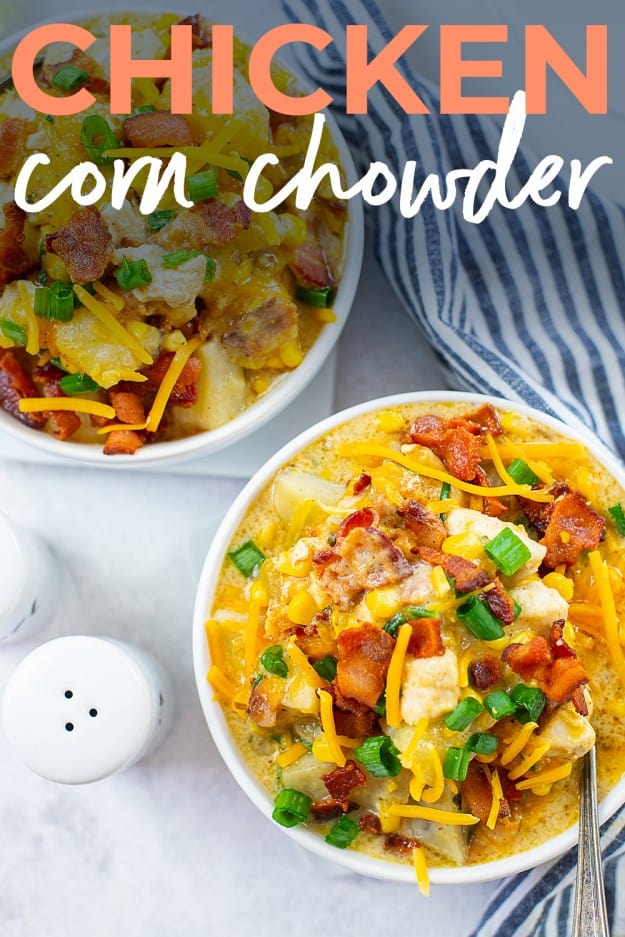 This CHICKEN CORN CHOWDER recipe is hearty and filling, made with fresh sweet corn, chunks of chicken, and plenty of potatoes and bacon. This is the ultimate summer soup recipe!

There’s not a whole lot better than fresh sweet corn straight from the field, if you ask me.

Of course, we love it any which way you want to cook it (hello, scalloped corn, cream cheese corn, and cornbread casserole)!

This easy corn chowder is so hearty and filling. It’s full of the sweet flavor and crunch of corn, there are lots of juicy chunks of chicken, chunks of potato, and then – this is the part that really gets ya – it’s all topped with crispy bacon and cheddar cheese.

Soup, or rather chowder, doesn’t get much better than this. Thick, creamy, and so flavorful.

This is yummiest made with fresh corn on the cob, but using canned corn works very well and is still tasty. We make this one all year round – fresh corn in the summer and canned or frozen corn in the winter. You really can’t go wrong, but it’s definitely best with fresh corn.

Corn on the Cob – Fresh is best, but you can swap in canned or frozen corn if its out of season.

Bacon – We’ll cook the potatoes in the bacon grease and crumble the cooked bacon over the finished soup.

Milk – We tend to use 2%, but any variety should work.

Chicken – Use our crockpot shredded chicken or any leftover chicken you’ve got!

How to make chicken and corn chowder:

Saute – Cook the bacon until crispy and then set it aside for topping your soup. Add chopped potatoes and the whites from the scallions to the pot and cook those for a few minutes. Sprinkle in the flour and cook for a minute or two.

Simmer – Pour in your milk, chicken stock, and dry seasonings. Stir this well to combine and then bring to a boil and reduce to a simmer. We’ll cook this for about 15 minutes, just until the potatoes are nice and tender.

Add the Corn & Chicken – Stir in the corn, chicken, and green chiles and let that simmer for a few more minutes, just to heat everything up.

Serve – Spoon the corn chowder into a bowl and top it off with bacon, cheddar, and green onions.

“Absolutely fantastic. I started out making the standard size batch shown above, but after 3 days my stepdaughter had eaten it all. I had one bowl! I went out and got the ingredients to make a few more and am keeping them on hand so I can make a bunch up and seal a few jars. Of all of the recipes I’ve made for my family over the past 5 years, this was the most well received food I’ve made. Thank you! ” -Ron

This chicken corn chowder will stay fresh, tightly covered, in the fridge for 3-5 days. It reheats best on the stove, though you can microwave it. We generally add a bit of milk or chicken stock while reheating it to thin it back out. It does thicken a bit as it sets in the fridge.

More soup recipes you will love: 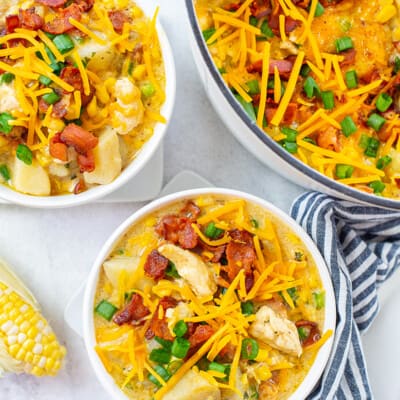 My favorite soup to serve in the summer. It’s so good with fresh corn cut from the cob!
5 from 2 votes
Print Pin Save Saved!
Prep20 minutes
Cook30 minutes
Total50 minutes
Serves 8

END_OF_DOCUMENT_TOKEN_TO_BE_REPLACED

You’ve got 30 minutes! Make it count with these kid-friendly favs.
END_OF_DOCUMENT_TOKEN_TO_BE_REPLACED

Baby, it's cold outside! And busy inside. Let's keep dinner simple with these crockpot favorites!
END_OF_DOCUMENT_TOKEN_TO_BE_REPLACED