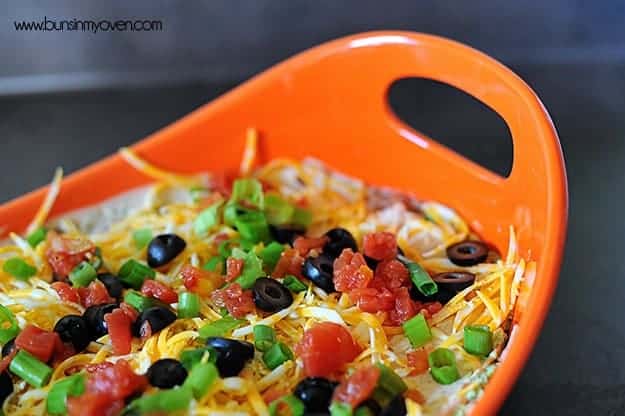 Can I let you all in on a little secret?

Beans. They were sent here to destroy us.

I don’t like them and I certainly don’t trust them.

In fact, it would not surprise me one bit if one day a scientific study came out that revealed that the insides of beans are actually made up of nothing but pureed insects.

I don’t eat beans. I don’t put them in my chili. I don’t order food from restaurants that has beans in it. I don’t get to sing the magical fruit makes you toot song, because I never have the need since I don’t eat beans.

Oh, and black beans? They are the worst. They are like little black balls of death and destruction.

So, basically I’ve avoided Seven Layer Dip like it’s the plague, even though Mexican foods and dips are my two favorite things in the world. And then, one day I didn’t avoid it anymore. I saw it on Aggie’s Kitchen and I went to the grocery ten minutes later and thirty minutes after that I was serving Seven Layer Dip for lunch.

I won’t be eating beans in any other dish, but good gravy, you guys. Seven Layer Dip is an amazing thing. 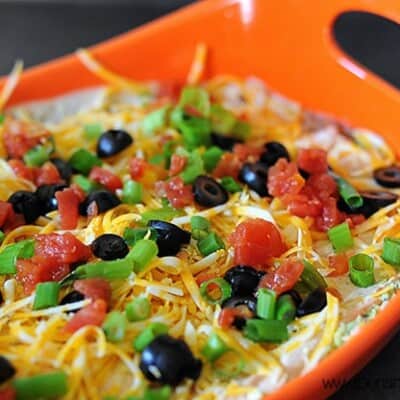 I'm not a fan of black beans, so I avoided making 7 layer dip. Then I saw an amazing version on another blog and knew I had to make my own.I won't be eating beans in any other dish, but good gravy, you guys. Seven Layer Dip is an amazing thing.
Print Pin Save Saved!
Prep5 minutes
Cook5 minutes
Total10 minutes
Serves 16 servings

recipe from Ro*Tel via Aggie’s Kitchen

END_OF_DOCUMENT_TOKEN_TO_BE_REPLACED

You’ve got 30 minutes! Make it count with these kid-friendly favs.
END_OF_DOCUMENT_TOKEN_TO_BE_REPLACED

Sweet treats are a must in our house! Check out a few of our best recipes!
END_OF_DOCUMENT_TOKEN_TO_BE_REPLACED