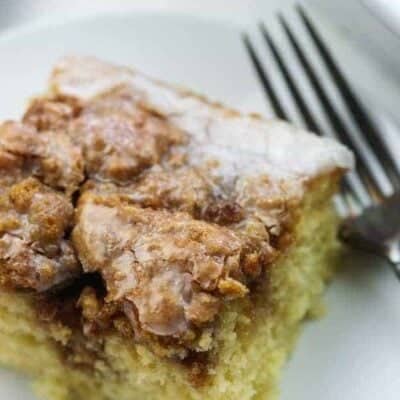 This moist cake is swirled with a mixture of brown sugar and cinnamon to give it that classic cinnamon roll flavor! The cake gets topped off with an easy glaze and makes a great breakfast or dessert.
5 from 6 votes
Print Pin Save Saved!
Prep15 minutes
Cook40 minutes
Total55 minutes
Serves 15

END_OF_DOCUMENT_TOKEN_TO_BE_REPLACED

You’ve got 30 minutes! Make it count with these kid-friendly favs.
END_OF_DOCUMENT_TOKEN_TO_BE_REPLACED

Baby, it's cold outside! And busy inside. Let's keep dinner simple with these crockpot favorites!
END_OF_DOCUMENT_TOKEN_TO_BE_REPLACED