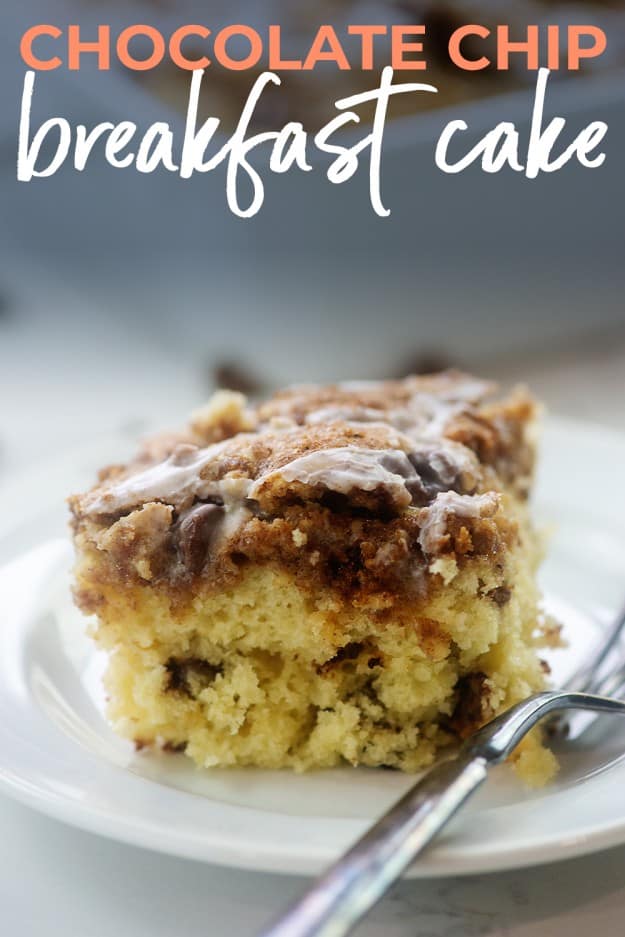 This CHOCOLATE CHIP CINNAMON ROLL CAKE is loaded with chocolate and swirls of cinnamon and sugar, and then topped with an easy homemade glaze!

We’ve been on a major breakfast kick around my house lately. I’ve been testing new recipe and sort of fell into a ‘cake for breakfast’ trap.

You know a recipe is GOOD when I create every variation under the sun and share it with you.

And here I am with a chocolate chip cinnamon roll cake recipe that I’m going to need you to try immediately!

I don’t know what it is about this cake recipe (yes, I do – it’s the moist, tender crumb…the thick swirl of cinnamon and sugar…the simple vanilla glaze…the fact that it’s cake and it’s also 8am and I’m eating it with a cup of coffee…), but I’m actually obsessed.

I’ll try to hold off on sharing any other variations, lest you get tired of this cake. Unless…do you want more variations? Because I can do that, too. 😉

Serve this up with some air fryer sausage links and some baked scrambled eggs.

Cake Batter – This is a simple cake made with flour, sugar, butter, eggs, milk, and baking powder.

Mix-ins – This time around we’re stirring in chocolate chips. Use any variety you love!

Cinnamon Swirl – Brown sugar and cinnamon get sprinkled over the cake batter and swirled right in.

Glaze – Just a simple mix of powdered sugar and milk.

Batter: We’ll start by making the cinnamon roll cake batter! In a large mixing bowl, add all of the cake ingredients except for the melted butter and chocolate chips and mix until everything is well combined.

If you don’t have the time (or the ingredients) to make some homemade cake batter, you can use a box mix instead! Just prepare according to the instructions and add the chocolate chips.

Topping: When the batter is ready you can pour it into a prepared baking dish and move on to making the sweet, cinnamon topping! In a small mixing bowl add the brown sugar and cinnamon and whisk together.

Sprinkle the topping over the batter evenly and then use a butter knife to swirl the cinnamon and sugar topping into the batter.

You can’t have enough chocolate in this cinnamon roll cake recipe so go ahead and top it off with some more chocolate chips!

Bake: Once you’ve finished topping the cinnamon roll cake batter with all that sweet sweet chocolate you can go ahead and start baking. This shouldn’t take long, only about 35 to 40 minutes.

Once it has finished let it cool for at least ten minutes and resist eating it now before beginning the final step; the glaze!

You can make a quick, simple glaze by whisking together some powdered sugar and milk. If you want to change the consistency you can add more milk to thin it out.

Pour the glaze over the cake and let it firm up and set before slicing and serving!

Not sure about cake for breakfast? This makes a fabulous dessert as well!

It’s sweet enough to double as dessert, but also makes a fun treat for breakfast. Eat it any time the craving hits.

Make It a Meal!

Looking for the perfect breakfast? Serve your cake alongside these breakfast options: 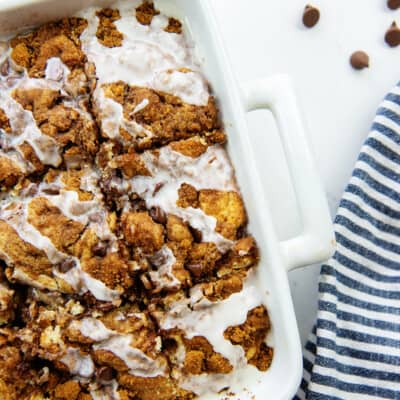 We took a simple yellow cake and stirred in chocolate chips and a thick swirl of brown sugar and cinnamon. Whether you enjoy this cake for breakfast or as a sweet treat after dinner, it's sure to quickly become a family favorite.
Print Pin Save Saved!
Prep15 minutes
Cook40 minutes
Total55 minutes
Serves 15

To make the cake:

Easy Option: If you’re in a rush, skip the homemade cake batter and use a cake mix instead. Just prepare as directed, stir in the chocolate chips, and continue as the recipe says. Bake according to package directions.  Storage: Store the cake tightly covered at room temperature for 3-4 days.

END_OF_DOCUMENT_TOKEN_TO_BE_REPLACED

You’ve got 30 minutes! Make it count with these kid-friendly favs.
END_OF_DOCUMENT_TOKEN_TO_BE_REPLACED

Baby, it's cold outside! And busy inside. Let's keep dinner simple with these crockpot favorites!
END_OF_DOCUMENT_TOKEN_TO_BE_REPLACED