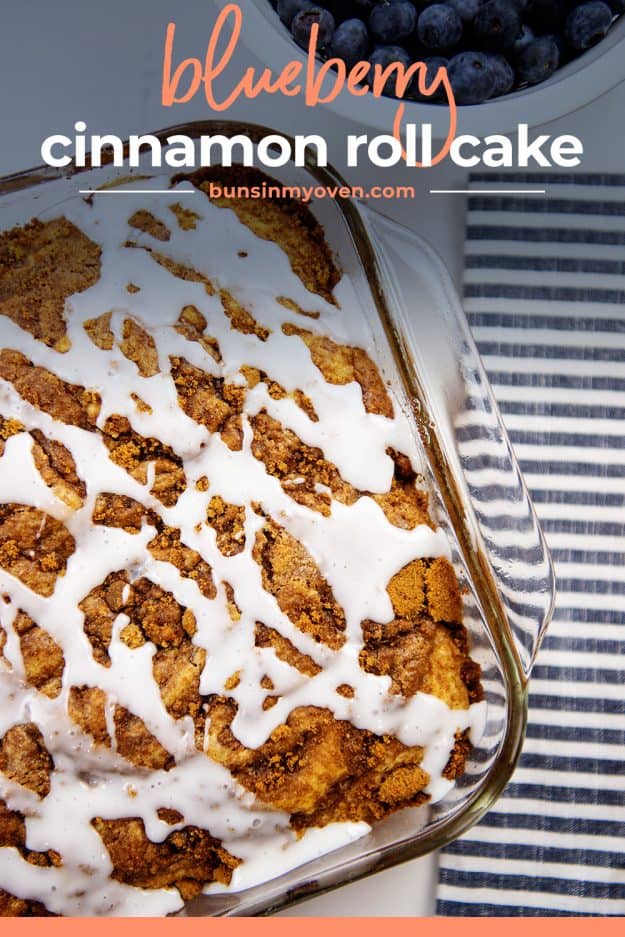 This BLUEBERRY CINNAMON ROLL CAKE is the ultimate way to eat cake for breakfast! Swirls of cinnamon, juicy berries throughout, and a simple glaze over the top.

When it comes to breakfast, my family will almost always choose something sweet.

I mean, I wrote an entire cookbook full of pancake recipes. 😉

Our cinnamon roll cake has been a longtime hit with readers (and with my kiddos), but one reader mentioned that she was going to try adding blueberries the next time.

It was so good (and such a simple way to make the cake extra special) that I’m back to share it with you!

Next up, we’ll try adding blueberries to our cinnamon roll French toast casserole.

Sugars – You’re going to need brown and granulated sugar for the cake and powdered for the glaze.

Butter – We use salted.

Blueberries – We only tested this with fresh berries, but I do believe frozen would work.

Mix: While your oven is preheating, add the flour, sugars, cinnamon, baking powder and salt to a large mixing bowl and mix until well combined. Add the milk, eggs, and melted butter and mix until it’s just combined, do not overmix.

Our homemade yellow cake is absolutely perfect here, but if you’re in a rush, feel free to swap in a box of vanilla cake mix. Just prepare the cake mix according to package instructions and then proceed with this recipe.

We’re coating the berries in flour to help prevent them from sinking to the bottom of the cake while baking.

Fold the blueberries into the cake batter until they’re just combined. Pour into a greased 9×13 baking dish.

Topping: For the topping all you’ll need is a cup of brown sugar and a tablespoon of cinnamon! Whisk them together and then sprinkle over the top of the blueberry and cinnamon batter.

Now the fun part! Get a butter knife and use it to start swirling the topping into the batter until everything is evenly distributed.

Bake and Cool: Put the dish in the pre-heated oven and bake for 35-40 minutes or until a tester comes out clean. Allow the cinnamon roll cake to cool for about ten minutes before making and adding the glaze.

Glaze: Whisk together milk and powdered sugar to make the glaze, adding 1 tablespoon of milk at a time to reach your desired consistency.

While the cake is still warm pour the glaze over the top and allow it to set before serving! 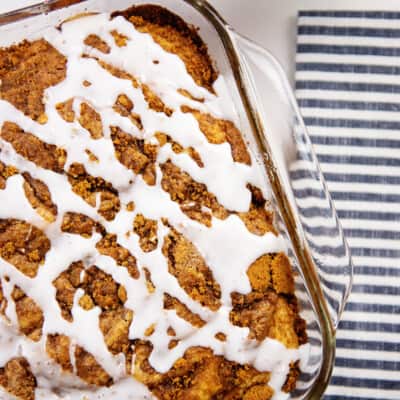 This moist cake is swirled with a mixture of brown sugar and cinnamon and studded with juicy blueberries. The cake gets topped off with an easy glaze and makes a great breakfast or dessert.
Print Pin Save Saved!
Prep15 minutes
Cook40 minutes
Total55 minutes
Serves 15

To make the cake:

END_OF_DOCUMENT_TOKEN_TO_BE_REPLACED

You’ve got 30 minutes! Make it count with these kid-friendly favs.
END_OF_DOCUMENT_TOKEN_TO_BE_REPLACED

Baby, it's cold outside! And busy inside. Let's keep dinner simple with these crockpot favorites!
END_OF_DOCUMENT_TOKEN_TO_BE_REPLACED