Cinnamon Roll French Toast Casserole – this is the perfect overnight French toast casserole for any special morning! Serve mine up with extra maple syrup, please!

I’ve never been much of a cinnamon roll ran.

I mean, sure. As a kid, I would happily eat those cans of cinnamon rolls for breakfast but it was mostly all about the little tub of frosting, if we’re being honest.

Nowadays, I really don’t make cinnamon rolls too often – unless we’re having chili for dinner. 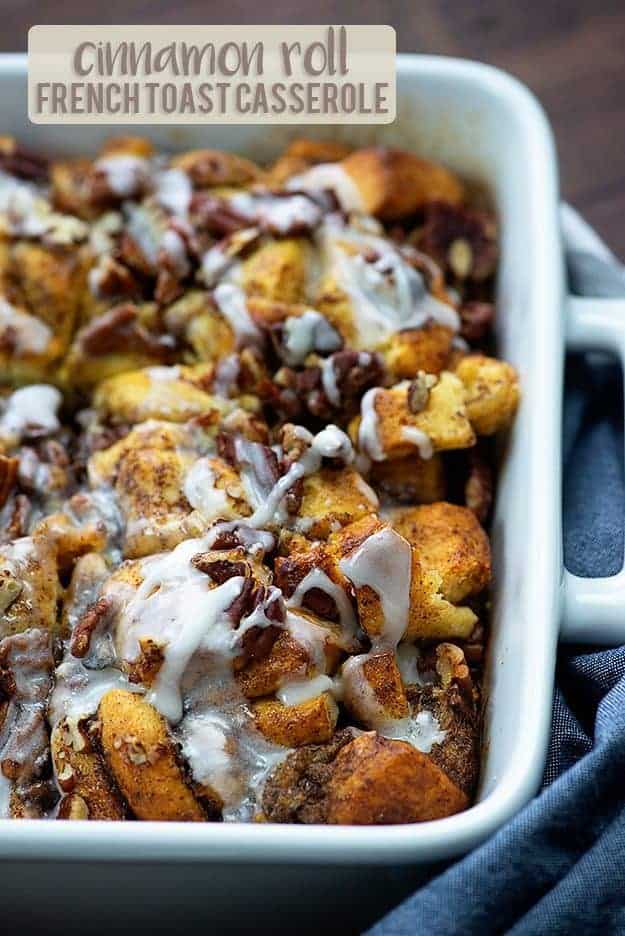 Sounds weird, but when we lived in Nebraska for a year awhile back that was a whole big thing. Cinnamon rolls and chili. I still don’t get it, but everyone there insisted we try it and now my kids will literally not eat chili if there isn’t a cinnamon roll sitting next to the bowl.

Anyway, I thought I’d be a nice mama and make my kids this cinnamon roll French toast bake for breakfast last weekend.

You’d have thought they won the lottery. This was a total hit for them and I loved how easy it was to make. 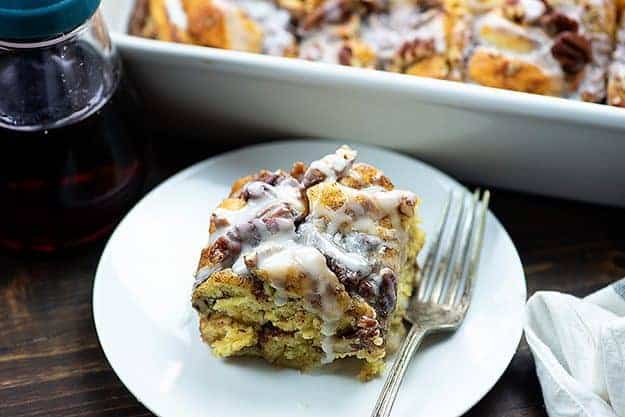 How to make French Toast Casserole:

You’re going to start with a couple of tubes of cinnamon rolls. Easy, right?

You’ll also need the usual ingredients for French toast – eggs, milk, a little cinnamon, some nutmeg, butter, and maple syrup. I’m throwing pecans into this casserole as well, because YUM.

First, you’ll whisk together your eggs, milk, cinnamon, and nutmeg. 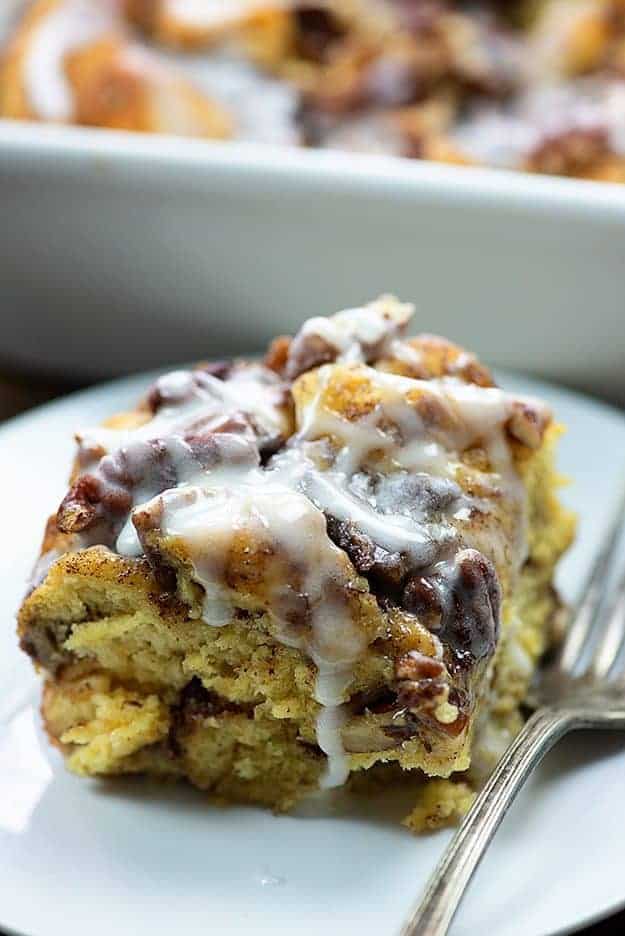 Combine everything together and pop it all in a greased 9×13 baking dish.

Drizzle syrup over the top and sprinkle with pecans.

This gets covered tightly and placed in the fridge overnight.

In the morning, pop it right in the oven at 375 degrees for about 35 minutes.

If you want to skip the overnight step, just pop this right in the oven! It’ll take closer to 30 minutes to bake if it hasn’t been refrigerated. 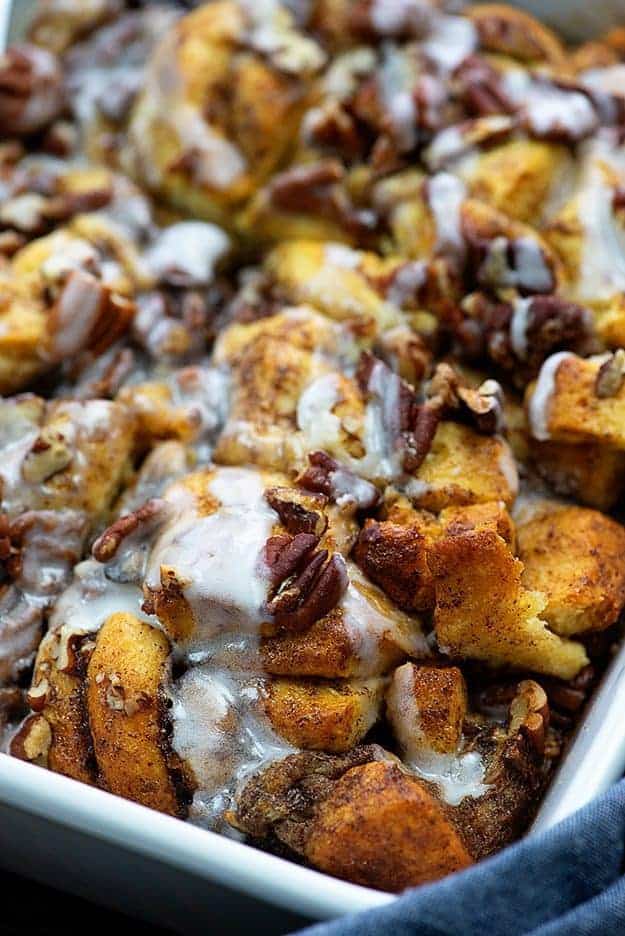 When this is finished baking, remove from the oven and drizzle with the containers of icing from the cans of cinnamon rolls.

Your kids are going to FLIP for this cinnamon roll casserole.

If you like this overnight french toast casserole, you’ll love these recipes too:

These cinnamon pancakes, from my book, are a favorite in this house for Saturday mornings.

This low carb breakfast casserole is sooooo filling and hearty.

My crockpot breakfast casserole is made easy with a slow cooker! 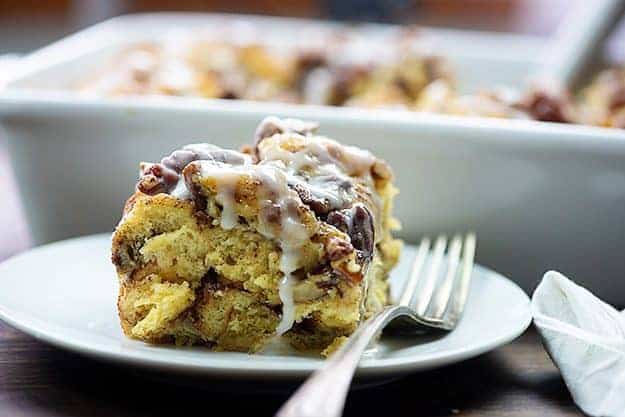 And this Mexican breakfast casserole is full of bagels and Mexican flavor.

If you give this easy french toast casserole recipe a try, I hope you’ll report back and let me know what you thought! Tag me on Instagram @bunsinmyoven or #bunsinmyoven. Leave a comment and rating below in the comment section too! Can’t wait to hear what you think. 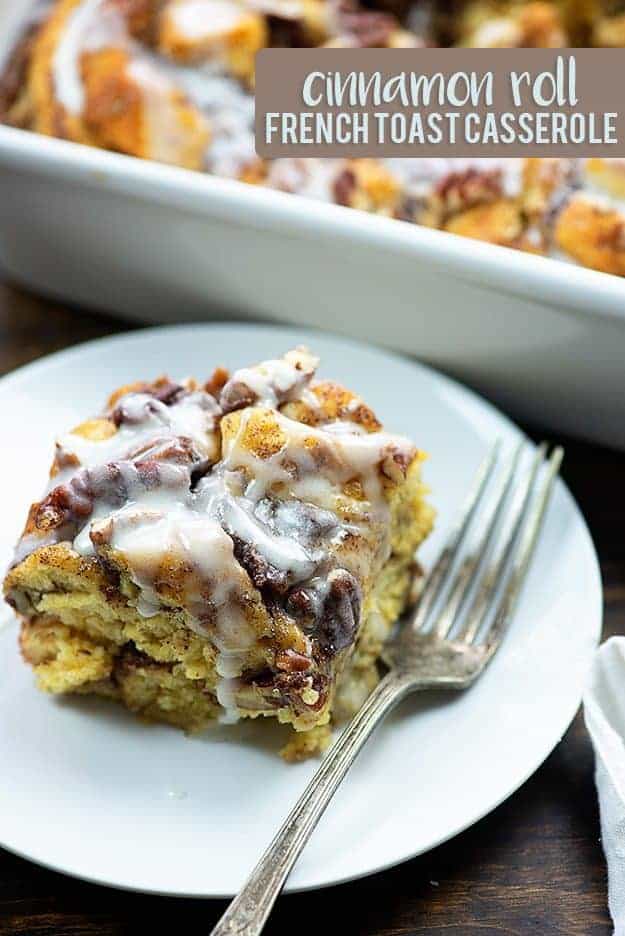 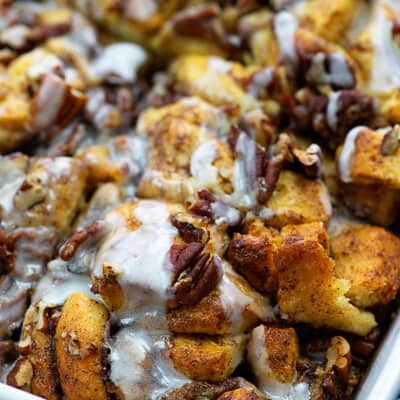 This cinnamon roll french toast casserole is easy to make the night before and then pop in a hot oven when you wake up! I like mine served with extra maple syrup on the side!
4.5 from 2 votes
Print Pin Save Saved!
Prep10 minutes
Cook35 minutes
Resting Time8 hours
Total45 minutes
Serves 10

END_OF_DOCUMENT_TOKEN_TO_BE_REPLACED

You’ve got 30 minutes! Make it count with these kid-friendly favs.
END_OF_DOCUMENT_TOKEN_TO_BE_REPLACED

Baby, it's cold outside! And busy inside. Let's keep dinner simple with these crockpot favorites!
END_OF_DOCUMENT_TOKEN_TO_BE_REPLACED