These pancakes are loaded with raisins and have a nice, hearty texture from the whole wheat flour. Drown ’em in some maple syrup or the cinnamon syrup recipe from my book! Either way, you’re going to love this pancake recipe!

These pancakes are in honor of her!

So, I miiiiiiiight have mentioned to y’all that I wrote a little book? A little book that is bursting with pancake recipes? Yeah, it’s called “Stack Happy”!

I thought I’d help get you guys excited about the book by sharing one of the recipes!

“A slice of cinnamon raisin bread has to be one of my favourite breakfasts in the world… I swear it was ALL I ate as a child. I love that you turned the flavours of it into pancakes! I must try the recipe.” -Thalia

How to make this cinnamon pancake recipe with raisins:

To start, boil your raisins to rehydrate them a bit. Do this by adding a half cup of water and 3/4 cup of raisins to the pan and heat it up. Remove from the heat after it starts boiling and set the raisins aside. This will plump them up and get them nice and juicy.

In a medium bowl, combine your flour, sugar, cinnamon, baking powder, baking soda, and salt. Mix these together well and then stir in the raisins.

In a small bowl, mix together the buttermilk, egg, butter, and vanilla. Then add this entire mixture to the medium bowl and stir until combined, but slightly lumpy. We don’t want to overmix our pancake batter – a few lumps are good!

Heat your griddle or skillet and add some butter or non-stick spray. Use a 1/4 cup measure to portion out the pancakes. You’ll wind up with about 8. Cook until bubbles form AND pop on the surface, flip, and continue cooking until golden brown and cooked through.

Wondering what other recipes to expect from Stack Happy? How about some Cookies ‘n Cream Pancakes, Coconut Quinoa Pancakes (they’re actually super delicious!), potato pancakes which I obviously loaded up with cheese and bacon.

That’s right…this book is loaded with both sweet and savory pancakes. Pancakes for every meal…even dessert!

I think the hardest recipe for me to perfect in the book was the cheesecake pancakes and lemme tell ya, if you like cheesecake, you’ll be loving on that recipe for sure! Buy my book here! 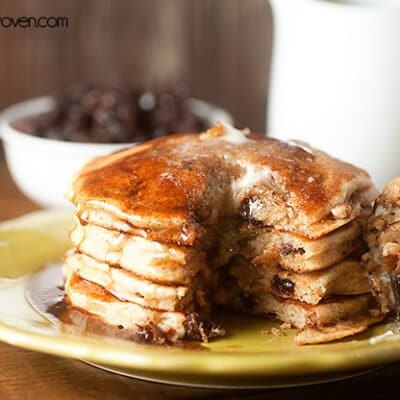 These pancakes are loaded with raisins and have a nice, hearty texture from the whole wheat flour.
Print Pin Save Saved!
Prep10 minutes
Cook10 minutes
Total20 minutes
Serves 8 pancakes

END_OF_DOCUMENT_TOKEN_TO_BE_REPLACED

You’ve got 30 minutes! Make it count with these kid-friendly favs.
END_OF_DOCUMENT_TOKEN_TO_BE_REPLACED

Baby, it's cold outside! And busy inside. Let's keep dinner simple with these crockpot favorites!
END_OF_DOCUMENT_TOKEN_TO_BE_REPLACED