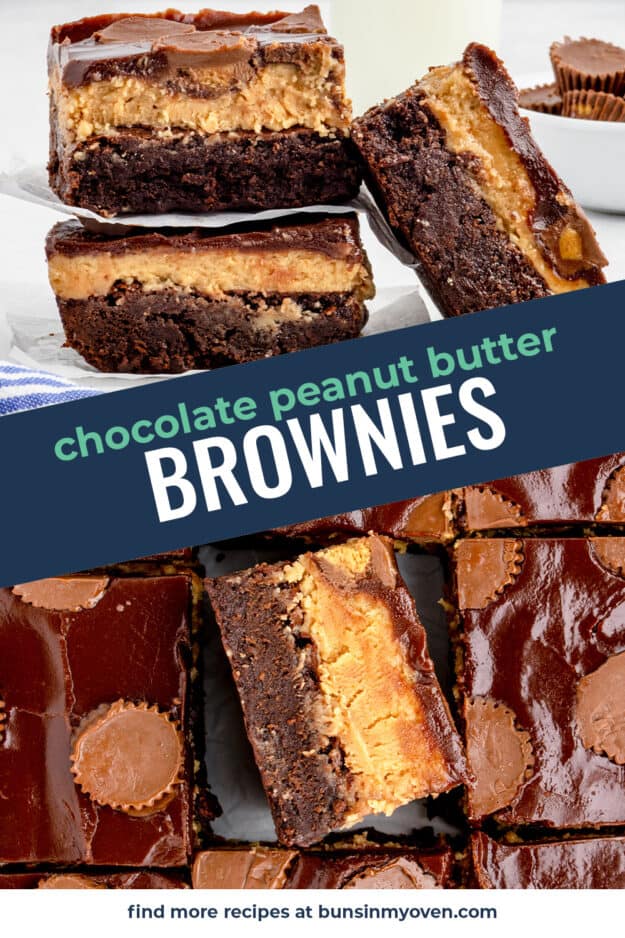 Our Chocolate Peanut Butter Brownies are a dream come true for Reese’s lovers! Made with a layer of fudgy brownies, thick peanut butter frosting, my mom’s famous fudge frosting, and Reese’s candy!

We have a major thing for chocolate and peanut butter in our house and Reese’s are one food we will all fight over.

(Quick – what’s the best Reese’s holiday shape? There’s only one right answer and it will tell me all I need to know about you!)

These Chocolate Peanut Butter Brownies are for serious chocolate peanut butter lovers only!

Next, these get topped with a thick layer of rich, thick peanut butter frosting.

Then my mama’s chocolate frosting gets poured over the top.

And finally – the mini Reese’s cups.

I told you this was chocolate peanut butter overload!

Brownies – Use either our Nutella Brownies or homemade brownies. Both are perfect!

Chocolate Frosting – The top layer for these loaded Reese’s brownies is a simple homemade frosting that is thin and pourable and will set perfectly. It’s my mama’s recipe! It’s made with chocolate chips, sugar, butter, and milk.

“Wow!  These look amazing!  Brownies, peanut butter, PB cups!  I think the oven is calling, because of course I have all of the ingredients!  Thanks for the recipe!” – Laura

How to Make Brownies:

Brownies: First up, you need brownies! This recipe is for modifying already baked brownies to turn them into loaded Reese’s brownies! Start with a 9×13 pan of baked and cooled brownies.

Peanut Butter Frosting: To prepare the outrageously thick and creamy peanut butter frosting layer for these loaded brownies use a stand mixer to beat together the butter, peanut butter, powdered sugar, and heavy whipping cream. You can add more cream if you feel like it needs to be thinned out! We like it thick, to mimic the filling in a peanut butter cup. Spread that over the brownies.

Chocolate Frosting: My mama’s famous homemade chocolate frosting is a thin, pourable frosting that sets up into fudgy perfection. Add some sugar, butter, and milk to a saucepan and boil for exactly 1 minute. Remove from heat, then stir in the chocolate chips until they’ve fully melted into a smooth frosting! Immediately pour that over the peanut butter frosting and let it cool for 5 minutes.

Reese’s: When the chocolate frosting layer has cooled off for a few minutes you can start topping the brownies with the Reese’s Minis! They should sink well enough into the still warm brownies and frosting.

Finally, let these loaded Reese’s brownies cool for about 30 minutes before enjoying! Good luck keeping any willpower around these guys. You’ll be tempted to hoover the whole pan right into your face!

If you enjoyed these brownies and other dessert recipes with Reese’s, I would highly recommend checking out this air fried Reese’s recipe!

Start with a box mix of brownies. Just be sure to use a box meant for a 9×13 pan and make the ‘cakey’ version of brownies rather than the ‘fudgy’ version. (Usually has an extra egg.) This will help the brownie base hold up to all that frosting on top.

Swap the mini Reese’s for Reese’s Pieces to add a little crunch!

How long do brownies last?

You can keep these loaded Reese’s brownies in an airtight container for up to 3 to 5 days.

Can you freeze brownies?

Yes! If you’re freezing the cut individual brownies, place them in a freezer-safe container in layers separated with wax or parchment paper. If freezing the entire slab of uncut brownies, you’ll want to wrap it in plastic and then aluminum foil. 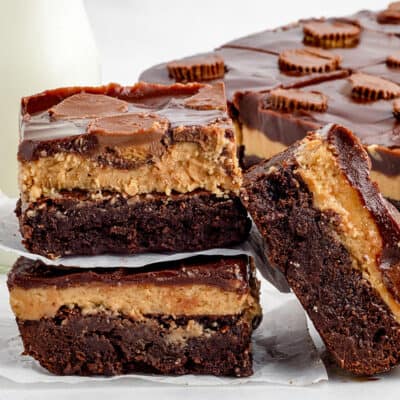 These brownies are packing a punch. Topped with the best ever peanut butter frosting, then a layer of my mama’s famous chocolate frosting, and topped off with some Reese’s!
Print Pin Save Saved!
Prep20 minutes
Cook5 minutes
Total25 minutes
Serves 12 brownies

If using a box mix of brownies, be sure to get one made for a 9×13 pan size and use the cake brownie recipe on the box (usually has more eggs than the fudge version which will help the brownies hold up better).  We like the peanut butter frosting to be fairly thick to mimic the filling of a peanut butter cup.

END_OF_DOCUMENT_TOKEN_TO_BE_REPLACED

You’ve got 30 minutes! Make it count with these kid-friendly favs.
END_OF_DOCUMENT_TOKEN_TO_BE_REPLACED

Baby, it's cold outside! And busy inside. Let's keep dinner simple with these crockpot favorites!
END_OF_DOCUMENT_TOKEN_TO_BE_REPLACED