These Instant Pot French dip sandwiches feature shredded chuck roast pressured cooked in a savory sauce. The beef is so tender and flavorful, and these sandwiches are a crowd favorite! Just 4 ingredients!

We first shared our crockpot french dip recipe back in 2016 and it quickly became a viral sensation on Facebook. That video has over 80 million views at last count!

One of the ingredients was quite difficult to find during a big chunk of time that recipe was going viral because so many people were making those famous French dip sandwiches! And boy, did you guys ever love those sandwiches! So many amazing reviews!

We figured it was high time we shared a quicker version of that favorite using the Instant Pot!

This Instant Pot French Dip Sandwich uses all the same ingredients, but it cooks in about an hour instead of the 6-8 hours it takes in the crockpot!

Whether you’re a seasoned pro or new to the Instant Pot, this recipe is a good one to try. So simple and the family loves it!

Oil – For browning the chuck roast before pressure cooking!

French Onion Soup – Nothing fancy here, I’m just using the canned kind. It’s quick, easy, and it adds lots of flavor to the beef! Any brand will work, but we like Campbell’s.

Au Jus Gravy Mix – We don’t use this in the original crockpot version, but I’ve found that you need to season food a bit more in the Instant Pot or things are a bit bland. This au jus mix adds lots of flavor and is easy to find. I use it in my Mississippi pot roast too.

Serving: You’ll need buttered and toasted hoagie rolls along with some provolone cheese to assemble your sandwiches.

How to Make French Dip Sandwiches in the Instant Pot:

Beef: To get started you’ll want to brown the chuck roast for extra flavor! Cut into 4 equal sized pieces and then set your Instant Pot to sauté with some oil. Once hot, sear the pieces of chuck roast on all sides!

Soup: Remove the chuck roast after browning and set it aside for now. Pour in the French Onion Soup, beef consommé, and the packet of Au Jus Gravy mix. Whisk all that together until well combined.

When you add the liquid to the pot take the opportunity to scrape all the browned bits off the bottom. This will add extra flavor to the soup mixture, but it’s also key to prevent the Instant Pot from giving you a burn notice during cooking.

Pressure Cook: You can now return the seared beef to the pot, close the lid, and set the vent to sealing. Turn the Instant Pot to manual and cook on high pressure for 60 minutes.

Allow the pressure to release naturally for at least 15 minutes before releasing any remaining pressure and opening the lid!

Shred: Remove the roast to a shallow dish and start shredding it up! You can use a couple of forks to make this quick and easy. The beef should be tender and fork shreddable by now.

After shredding the beef up return it back to the pot and stir it up with all that flavorful liquid still in there.

Assemble: When you’re ready to serve I’d first recommend toasting the hoagie rolls! Spread some butter on the inside of them and place them under a broiler for 2 minutes or until they are lightly toasted.

We then top the rolls with some provolone cheese. Cut the slice of cheese in half to get both sides of the roll and then top with the beef! It’ll get perfectly melty from the heat.

What to Serve with French Dip Sandwiches:

We like to serve these Instant Pot French dip sandwiches while they’re good and hot. And for the dip part of this recipe you’ll want to use all that remaining juice in the pot! It’s so flavorful and perfect for dipping!

These sandwiches will go well with all kinds of savory side dishes. Here are a few great options:

And don’t forget about the dessert! You’ll need something sweet to balance out all those savory flavors. Serve these French dip sandwiches with my perfect homemade brownies!

How to store French dip?

If you have leftover meat you’ll want to store it separately from the hoagie rolls. The meat should last in an airtight container in the fridge for at least 4-5 days.

What is a French dip?

It’s pretty much just thinly sliced or shredded beef piled up on French bread or a hoagie roll with some cheese and savory au jus beef juice for dipping! 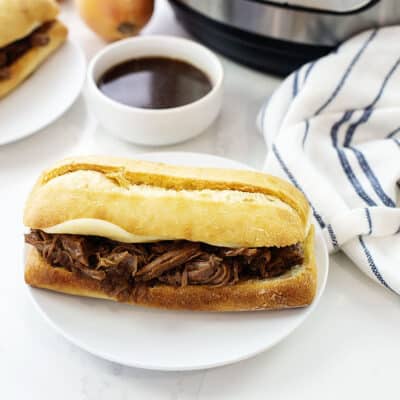 These French Dip sandwiches couldn't be easier, with just 5 ingredients for the beef plus buns and cheese! The beef turns out so tender in the pressure cooker, too.
Print Pin Save Saved!
Prep10 minutes
Cook1 hour 10 minutes
Pressure Build Up & Release30 minutes
Total1 hour 50 minutes
Serves 8 sandwiches

Be sure to scrape the bottom of the Instant Pot when whisking together the liquids, as any stuck bits on the bottom will result in a burn notice during pressure cooking. Seasoning the bread with a little garlic salt before broiling adds a nice touch, if desired.

END_OF_DOCUMENT_TOKEN_TO_BE_REPLACED

You’ve got 30 minutes! Make it count with these kid-friendly favs.
END_OF_DOCUMENT_TOKEN_TO_BE_REPLACED

Baby, it's cold outside! And busy inside. Let's keep dinner simple with these crockpot favorites!
END_OF_DOCUMENT_TOKEN_TO_BE_REPLACED