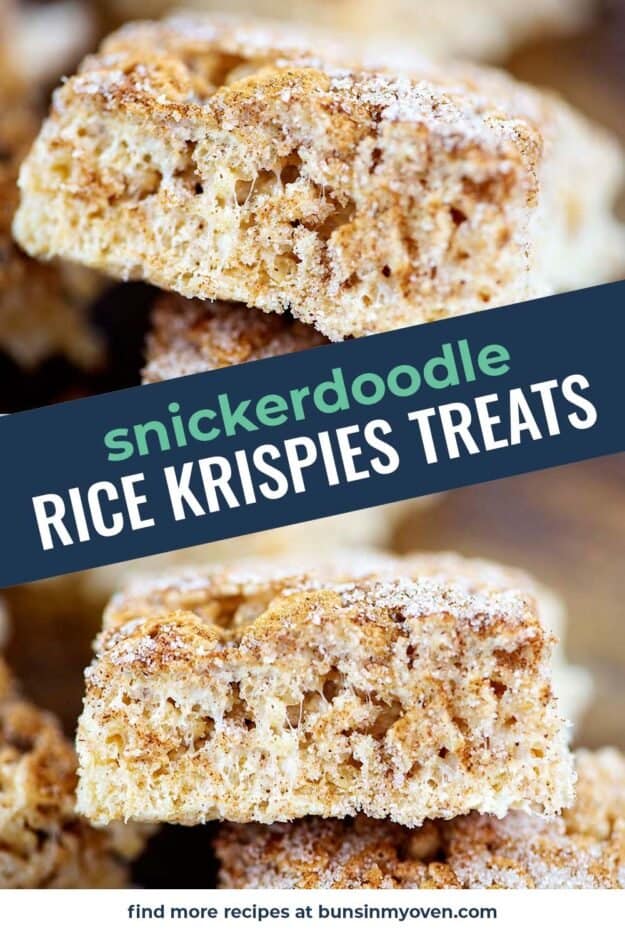 It should come as no surprise to anyone that I’m an absolute sucker for Rice Krispies Treats!

I mean, we’ve got quite the variety here on this site, ranging from our Oreo Rice Krispies Treats to Pumpkin Rice Krispies Treats! Heck, we’ve even made Lucky Charms Treats. The combo of marshmallow and butter and cereal is always good, if you ask me!

We took one of our favorite cookies – snickerdoodles without cream of tartar – and turned it into a no bake cereal treat by simply sprinkling cinnamon and sugar over the top and mixing just a pinch of cinnamon into the marshmallow goo.

Rice Krispies Cereal – A must, although we also love cereal treats with Chex cereal!

Marshmallow Goo – Mini or full sized marshmallows work well, but we prefer mini marshmallows – you’ll see why in the how to! You’ll melt these with some butter and mix in some vanilla extract for extra flavor.

Cinnamon/Sugar – Just like a snickerdoodle, these get a hefty sprinkling of cinnamon and sugar over the top.

Ooey gooey, just like the classic – but with a delicious cinnamon sugar twist! These are always a hit and we love that they’re no bake and only take about 10 minutes!

How to Make Rice Krispies Treats:

Melt: Melt the butter and all but two cups of the marshmallows in a sauce pan until just melted.

Mix: Once the marshmallows are goo, stir in the remaining 2 cups of mini marshmallows, along with the vanilla, and a sprinkle of cinnamon. Stir until the extra marshmallows have softened up a bit, but aren’t completely melted and then add your cereal.

Spread: Pour the gooey cereal mixture into a greased 9×13 and then press it flat.

Spray a piece of wax paper with non-stick spray and use that to press the cereal mixture into place. The cereal won’t stick to your hands or the wax paper!

Sprinkle: Combine the cinnamon and sugar and sprinkle it evenly over the top.

Cool: The hardest part of the process is waiting for the Snickerdoodle Rice Krispies Treats to cool. Let them set for an hour and then slice and serve!

We don’t recommend using only full sized marshmallows, because we like to stir in a handful of mini marshmallows after melting – it adds delicious little bits of soft (but not melted) marshmallow throughout the treats. If you only have full size, you can skip that step or you can cut the marshmallows into small pieces.

How to store Rice Krispies Treats?

These Snickerdoodle Rice Krispies Treats can be stored at room temperature in a sealed container for 2-3 days. They’ll last longer but the texture will change the more they sit!

How to freeze Rice Krispies Treats?

You can freeze the Snickerdoodle Rice Krispies Treats for about two to three months. First slice the treats into bars or squares and wrap each one in plastic wrap or wax paper before sealing in a freezer bag.

Why are my Rice Krispies Treats sticky?

You may have added too much butter or marshmallow, which can result in a soggy and/or sticky cereal treat. If you add too little they’ll turn out hard and crunchy. We’ve tested the ratios here for the ultimate Rice Krispies Treats with just the right amount of gooey goodness. 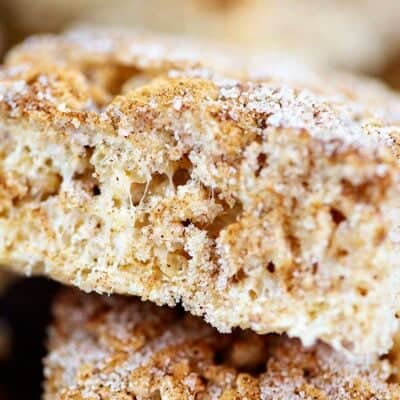 We took the classic Rice Krispies Treats to a whole new level by adding a bit of cinnamon into the marshmallow mixture and sprinkling cinnamon sugar over the top. These no bake bars are irresistible!
Print Pin Save Saved!
Prep5 minutes
Cook5 minutes
Cooling Time1 hour
Total1 hour 10 minutes
Serves 12 bars

END_OF_DOCUMENT_TOKEN_TO_BE_REPLACED

You’ve got 30 minutes! Make it count with these kid-friendly favs.
END_OF_DOCUMENT_TOKEN_TO_BE_REPLACED

Baby, it's cold outside! And busy inside. Let's keep dinner simple with these crockpot favorites!
END_OF_DOCUMENT_TOKEN_TO_BE_REPLACED