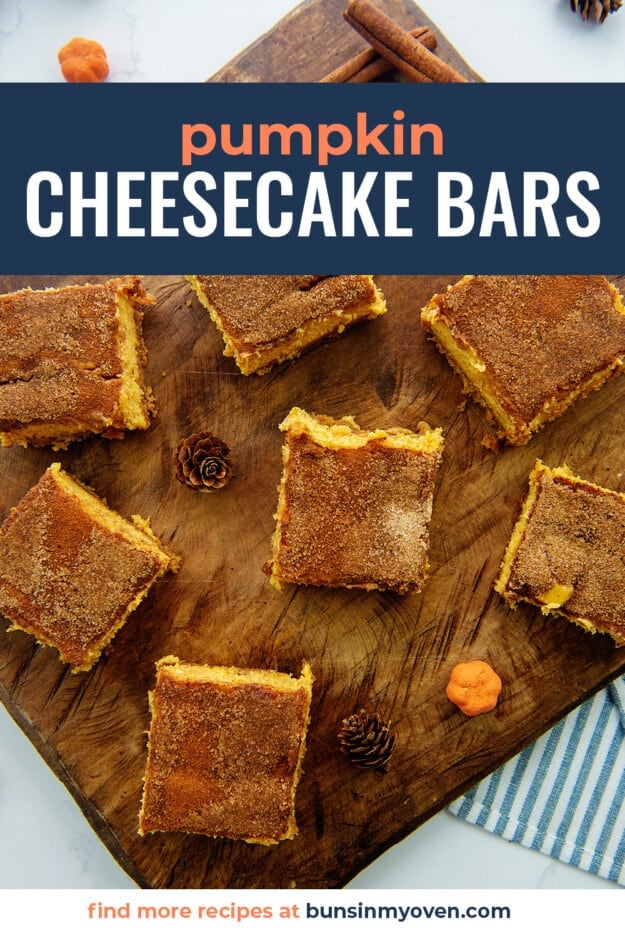 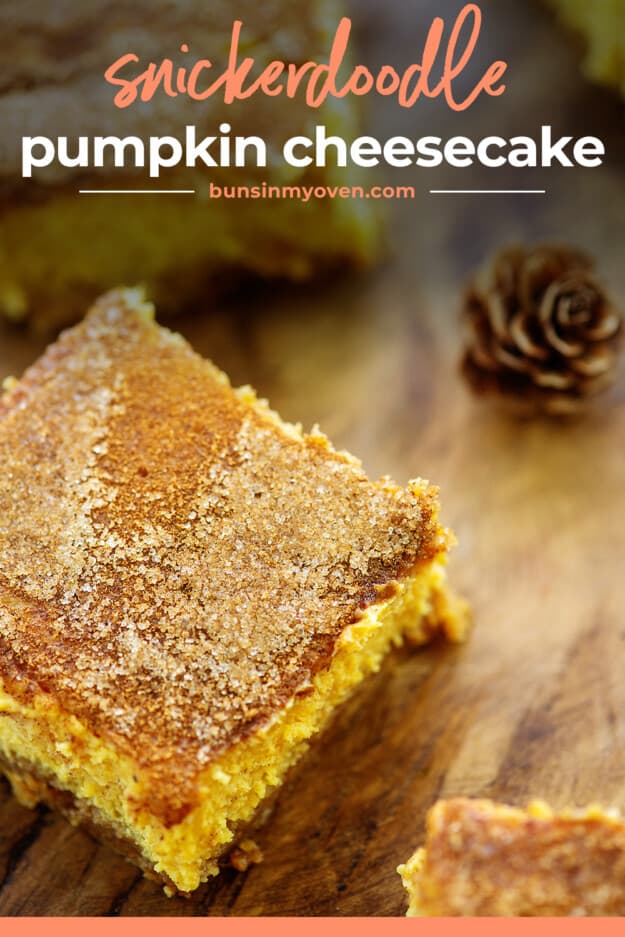 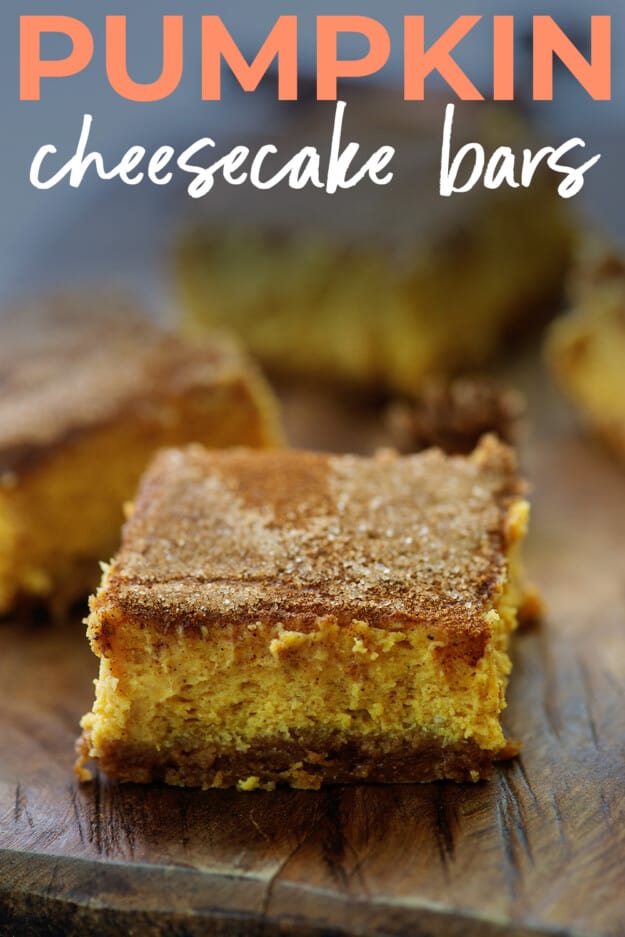 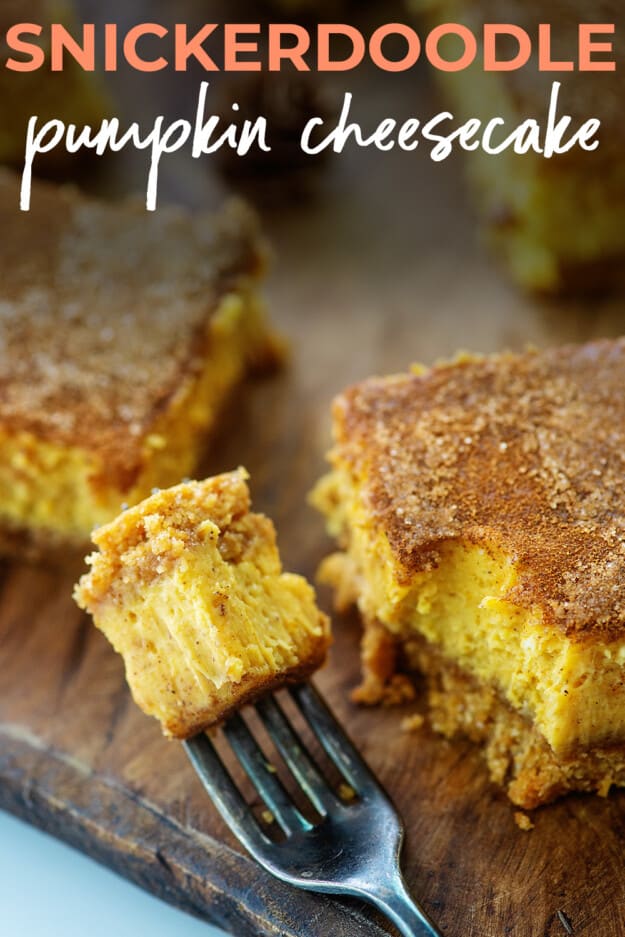 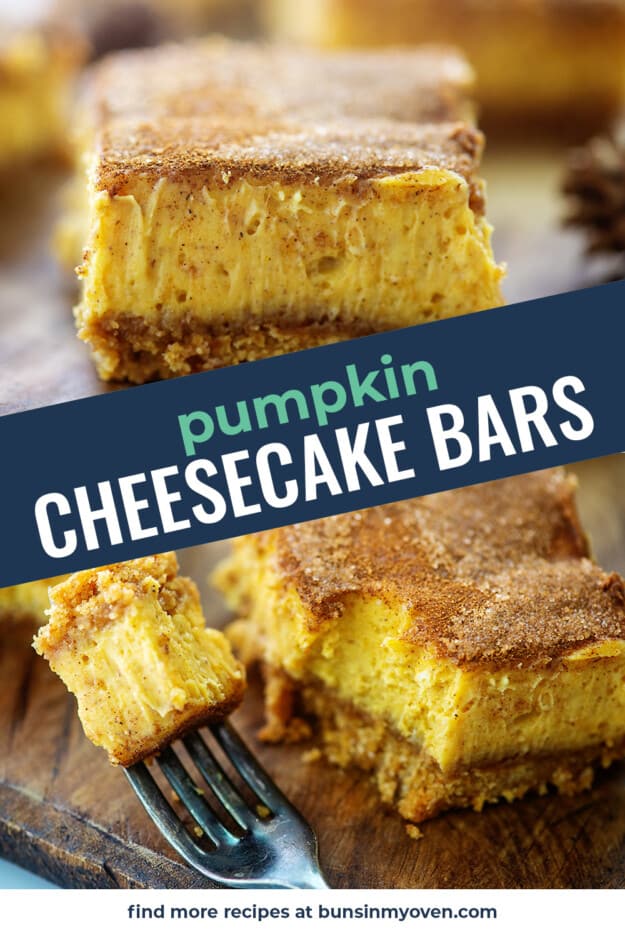 Our SNICKERDOODLE PUMPKIN CHEESECAKE BARS will have your family begging for more! We make an easy pumpkin cheesecake over a graham cracker crust and then sprinkle cinnamon and sugar over the top for a crackly topping that you can’t resist!

There are two things that we’re obsessed with in this house and that’s pumpkin and cinnamon sugar!

Combine the two and you have a dessert that is just irresistible!

We shared our layered pumpkin cheesecake bars and our best snickerdoodle recipe awhile back…it was time to merge the two into these easy cheesecake bars!

As you might imagine, I often give away most of our treats on days we’re recipe testing and/or shooting photos. No one household can eat the amount of desserts a food blogger puts out. 😉

Well, let me tell you…I gave a couple of pieces of this to my parents and aunt and then I hid the rest of it in the back of the fridge for myself.

Why You’ll Love This Recipe:

These pumpkin cheesecake bars are not at all fussy – just beat together the filling, pour over a standard graham cracker crust, sprinkle on cinnamon sugar, and bake! The cheesecake is ultra creamy, loaded with pumpkin flavor, and that crackly cinnamon sugar topping always leaves people asking for the recipe!

Our graham cracker crust is beyond simple and is just perfect for a cheesecake!

Just swap out the regular graham crackers for these gluten free cracker crumbs!

Cheesecake Topping – The topping is a quick and easy mix of cinnamon and sugar.

When you’ve combined these into a coarse crumbly mixture go ahead and start pressing the it into the bottom of a prepared baking dish in an even layer. Use your hands, the bottom of a glass, or something similar to press it down tightly into the dish.

To finish preparing the graham cracker cheesecake crust add the dish to the oven and bake for five minutes. Remove from the oven, set it aside for now and move on to making the pumpkin filling.

Prepare the Filling: You’ll want either a hand mixer or stand mixer to whip up the pumpkin snickerdoodle cheesecake filling. Start by mixing together the cream cheese, sugar, and sour cream.

When these are well combined you can add in the pumpkin puree.

Next, beat in the eggs one at a time, until just incorporated. You don’t want to overmix the cheesecake filling.

Stir in the vanilla and pumpkin spice and your filling is done! a

Pour the filling over the graham cracker crust. Use a rubber spatula to smooth the filling out evenly in the dish over the crust.

Once that’s done you can start baking. It’ll take about 45 minutes or until the center is slightly jiggly. At this point you turn the oven off and leave the dish in the warm oven for another 45 minutes with the door cracked open. <– This is the magic that keeps your cheesecake from cracking!

Let it cool completely before transferring to the refrigerator. Serve cold!

What makes this a “snickerdoodle” cheesecake?

The cinnamon sugar topping gives this cheesecake that snickerdoodle vibe!

How long does cheesecake last in the fridge?

Homemade cheesecake will last in the fridge for about 5 days.

Can I bake this in a springform pan?

You probably can, but we haven’t tested it ourselves. There will likely be a bit more graham cracker crust and cinnamon sugar topping than you’ll need if you bake this in a springform pan. You’ll also want to increase the bake time and cook until the cheesecake is just slightly jiggly in the center. 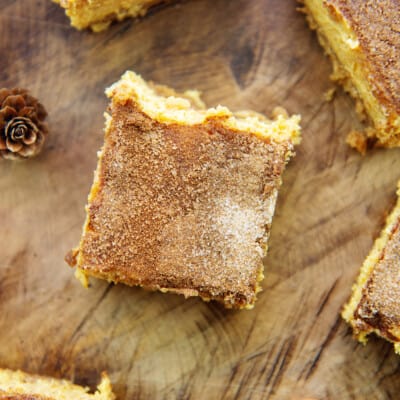 This smooth and creamy pumpkin cheesecake is baked with a butter graham cracker crust, but the real star of the show is that crackly cinnamon sugar topping!
Print Pin Save Saved!
Prep20 minutes
Cook45 minutes
Chill Time4 hours
Serves 20 bars

For the cheesecake filling

For best results, cream cheese and eggs should be fully at room temperature. You’ll end up with a lumpy cheesecake if your cream cheese is not soft enough. Mix the batter thoroughly until just combined. Over mixing will add too much air to your cheesecake which may cause it to rise, sink, and crack after baking. Letting the cheesecake set in the oven after baking with the door cracked is an easy way to help prevent the cheesecake from cracking as it cools.  Store tightly covered in the refrigerator for up to 5 days.  Serve with whipped cream, if desired.

END_OF_DOCUMENT_TOKEN_TO_BE_REPLACED

You’ve got 30 minutes! Make it count with these kid-friendly favs.
END_OF_DOCUMENT_TOKEN_TO_BE_REPLACED

Baby, it's cold outside! And busy inside. Let's keep dinner simple with these crockpot favorites!
END_OF_DOCUMENT_TOKEN_TO_BE_REPLACED