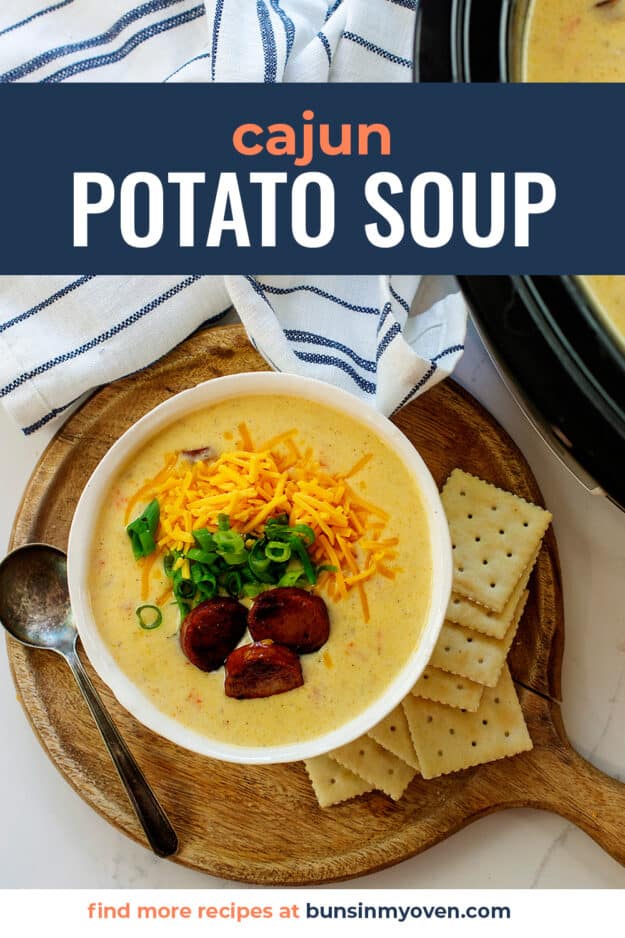 This Cajun potato soup is a thick, creamy soup that’s loaded with potatoes and andouille sausage. It has a Cajun kick to the soup that is hard to resist and perfect for a chilly night!

I’m a sucker for a bowl of creamy potato soup and our Crockpot Potato Soup has been a favorite around here for years and years. We make it all year long, but it’s on major repeat during the cooler months of the year.

I think my family was finally getting burnt out on the same soup being on repeat, so I doctored it up a bit with some Cajun flair!

We’ve still got the same creamy, dreamy potato soup, but this time it has the addition of andouille sausage and Cajun seasoning to give things a little kick.

Try serving this with our homemade biscuits, sweet cornbread, or our beer bread recipe! All three are perfect with this Cajun potato soup!

Andouille Sausage – This sausage is mildly spicy and will add so much flavor to the potato soup! It’s a common ingredient in many Cajun recipes and it pairs perfectly with the potato and creamy flavors.

Veggies – In addition to the potatoes you’ll add in some diced red bell pepper, sweet onion, and some minced garlic.

Chicken Broth – This makes up the base of the potato soup recipe and it’ll bring lots of flavor.

Cajun/Creole Seasoning – We love Tony Chachere’s. It’s our favorite Creole seasoning and we use it in all our Cajun & Creole recipes! If you have a preferred brand, feel free to use it.

Flour – Adding flour will help thicken up the soup.

Cheddar – We like good ol’ cheddar in this Cajun potato soup, but you could really use any variety of cheese that you like.

How to Make Potato Soup:

Veggies: To get started you’ll dice up the pepper and onion and add it to a hot skillet with some oil. Cook until the veggies have softened and then stir in the minced garlic, cooking for another minute.

Potatoes: Add the cooked veggies to your crockpot along with the diced potatoes, chicken broth, and your favorite Cajun seasoning! Cover it up and cook on high for 3 hours or until the potatoes are fork tender.

Thicken: Add the flour and milk to a mason jar, cover, and shake well to combine, or whisk together in a mixing bowl. Pour the flour mix into the crockpot and stir to combine.

Next add in the heavy cream, evaporated milk, and grated cheddar! Stir all that up again until it is well combined. Cover the crockpot and continue to cook on high for another 30 minutes.

Mash: Now to mash up those potatoes! That’s going to help to thicken up the soup even more, but it’s up to you how much you mash them. Use a potato masher to mash to your desired level of thickness for the soup.

Now would be a good time to give it a taste and add some extra Cajun seasoning or salt and pepper if you think it is necessary!

Sausage: Almost done! Heat some oil in a skillet and slice the andouille sausage into 1/2″ thick rounds and start browning them up on both sides.

When ready stir the browned sausage in to complete this Cajun potato soup recipe! It’s best served good and hot with some extra grated cheddar and green onion.

How to store potato soup?

You can keep this potato soup in a sealed container in the fridge for 4-5 days. It will thicken as it cools. To serve, add extra milk to reach your desired consistency.

Can you freeze potato soup?

Yes! This soup should freeze well. Just make sure you let it cool completely before transferring to a freezer safe bag or container. It’ll last for about 2 to 3 months.

Is this recipe very spicy?

That depends on how much Cajun/Creole seasoning you use and how spicy the seasoning blend you use is. The andouille sausage will also add a bit of spice. This sausage potato soup recipe should be mildly spicy for most people. 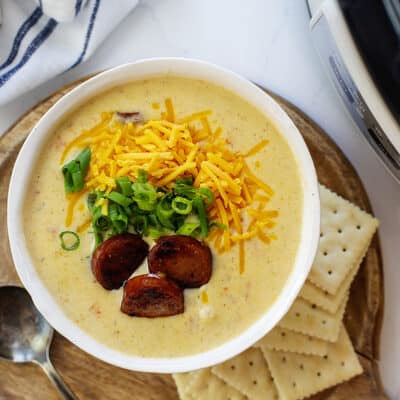 We added a little spice to our traditional potato soup with the addition of cajun seasoning and andouille sausage. This potato soup is so rich and creamy and the chunks of sausage are hard to resist!
Print Pin Save Saved!
Prep15 minutes
Cook3 hours 30 minutes
Total3 hours 45 minutes
Serves 10

We use Tony Chachere’s Seasoning. Technically it’s a creole seasoning blend, but we always use it as cajun seasoning. Tony’s is quite salty, so you’ll want to adjust salt depending on what kind of cajun seasoning you use and how salty it is. This soup is pretty thick – which is how we like it. You can thin it out with extra milk or broth, if you like a thinner soup.

END_OF_DOCUMENT_TOKEN_TO_BE_REPLACED

You’ve got 30 minutes! Make it count with these kid-friendly favs.
END_OF_DOCUMENT_TOKEN_TO_BE_REPLACED

Baby, it's cold outside! And busy inside. Let's keep dinner simple with these crockpot favorites!
END_OF_DOCUMENT_TOKEN_TO_BE_REPLACED