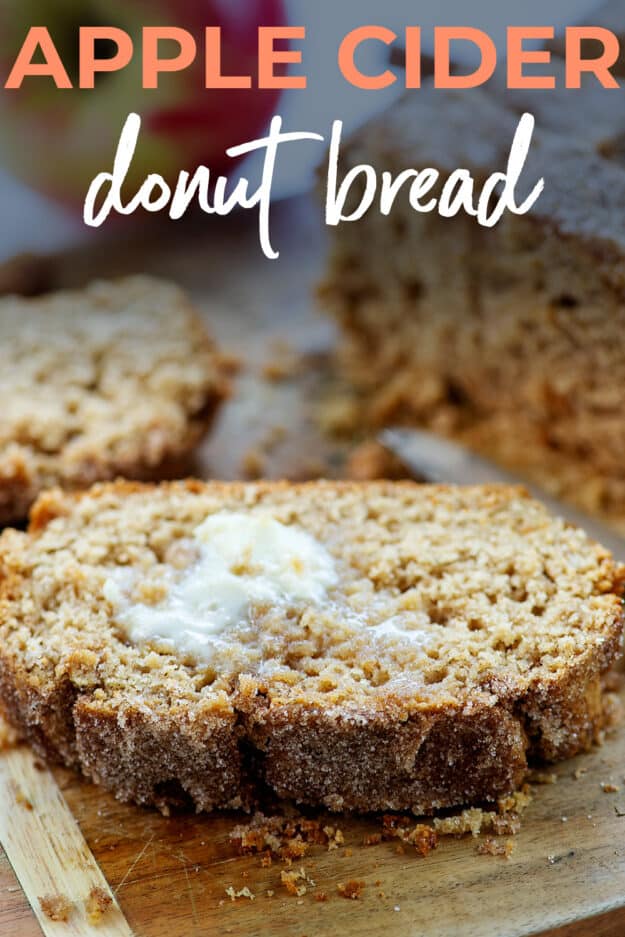 We look forward to freshly fried apple cider donuts from the local orchard all year long, but now we’ll be making this Apple Cider Donut Bread anytime the craving hits!

I go to the apple orchard at least once every Fall solely for the donut situation. I mean, those freshly fried apple cider donuts are worth driving 40 minutes outside of town!

We usually pick some apples as well, to make things like our apple cobbler (it’s insanely good and a must make!) or our Snicker apple salad.

The donuts, with that crackly cinnamon sugar crust, are the real draw though. Which is exactly why we made this Apple Cider Donut Bread – one bite will have you hooked!

And no – this isn’t just bread with cinnamon and sugar sprinkled over the top – there is a secret trick that gives this deep-fried donut vibes and I think you’re going to love it!

Apple Cider – You can use fresh local apple cider or buy a jug from the store. Apple juice works just as well. You could even try some homemade apple cider!

Wet Ingredients – Along with the cider you’ll need egg, butter, and vanilla extract.

Topping – Some melted butter mixed with cinnamon and sugar is a quick and easy topping for this apple cider donut bread.

Apple Cider: Cook the apple cider at a low boil until it’s reduced by half. This will help concentrate the flavor and really add so much to the bread!

Mix: Beat the brown sugar and butter with an electric mixer until it is light and fluffy. Next beat in the egg and vanilla until it is just combined.

Batter: Pour the reduced apple cider into the mixing bowl along with all of the remaining dry ingredients including the flour and apple pie spice. Stir by hand until it is just combined.

Bake: Grease your loaf pan (we use a 9×5) and then pour in the bread batter. Bake the apple cider donut bread for 50 minutes or until a tester comes out clean. Let it cool in the pan for 15 minutes before moving to a cooling rack.

Topping: Melt some butter and then brush it over the sides and top of the loaf of apple cider bread. Finally, mix together some cinnamon and sugar and start sprinkling it over the bread! Use as much or as little as you like.

The thing that sets this apart from a regular quick bread is that we’ve brushed the outside of the bread with melted butter to give it that rich flavor and add a little fat, like you’d get with deep frying a donut.

The cinnamon and sugar liberally sprinkled over the bread add crunch and texture that also helps mimic an apple cider donut.

Can I use apple juice?

How to store apple cider bread?

You can keep this apple cider donut bread at room temperature for about 5 days if it is well wrapped in plastic. 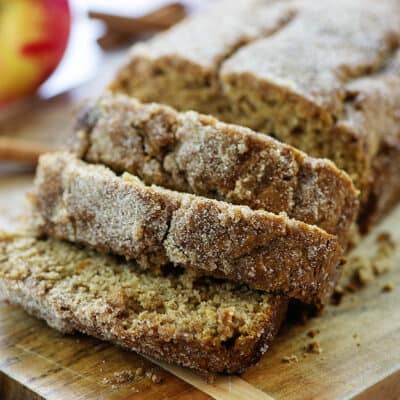 We wait all year for the local apple orchard to open up so we can enjoy their freshly fried apple cider donuts! This year we took matters into our own hands with this apple cider donut bread. It has that same crackly texture on the outside and loads of apple flavor packed in this tender loaf.
4.50 from 10 votes
Print Pin Save Saved!
Prep40 minutes
Cook50 minutes
Total1 hour 30 minutes
Serves 10 slices (1 loaf)

You may use apple juice if that’s all you can find in store, though the end result may be a bit sweeter.  Reducing the apple cider will take 20 to 30 minutes, depending on how high your heat is. Don’t skip this step – it really concentrates the flavor and helps the apple cider shine in the bread. You’ll start with 2 cups of apple cider and reduce it down to 1 cup. 1 cup of reduced cider will be added to the bread. Brushing the bread with melted butter and liberally sprinkling on the cinnamon and sugar is key to giving donut vibes to what is technically a loaf of bread. The richness of the butter and the crackly sugar crust really mimic the flavor and texture of an apple cider donut here.

END_OF_DOCUMENT_TOKEN_TO_BE_REPLACED

You’ve got 30 minutes! Make it count with these kid-friendly favs.
END_OF_DOCUMENT_TOKEN_TO_BE_REPLACED

Baby, it's cold outside! And busy inside. Let's keep dinner simple with these crockpot favorites!
END_OF_DOCUMENT_TOKEN_TO_BE_REPLACED