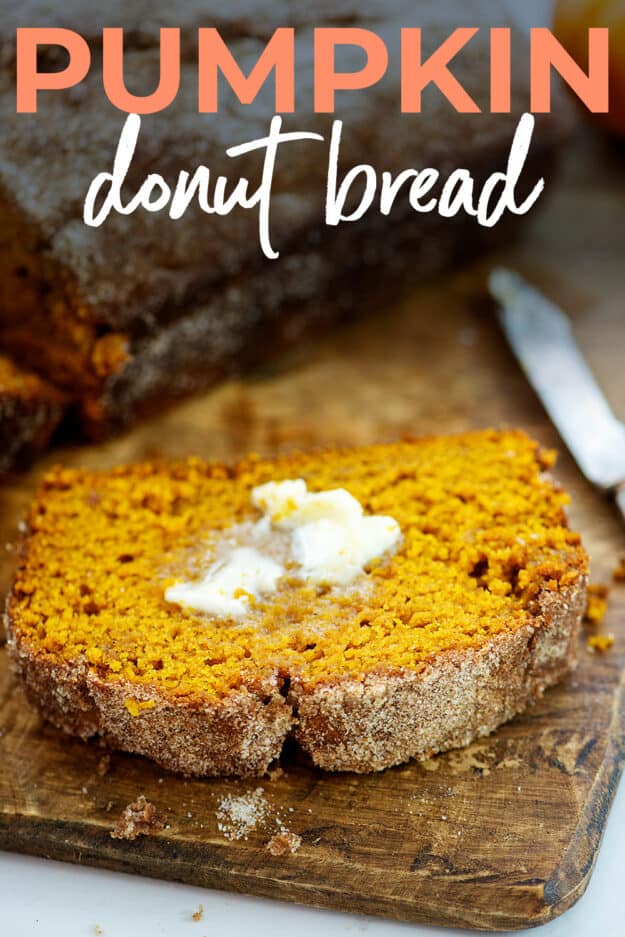 This homemade pumpkin donut bread is baked with real pumpkin and pumpkin spice and then topped with a buttery cinnamon and sugar topping! That crispy, crackly cinnamon sugar crust reminds of our favorite pumpkin donuts!

Did we just turn bread into donuts? Yes, we sure did!

Again, actually. 😉 We were just here with our Apple Cider Donut Bread a few weeks back and it’s already gotten so many good reviews, we thought a pumpkin version was in order!

We started with our Pumpkin Chocolate Chip Bread, but skipped the chocolate chips and instead brushed the outside with butter and sprinkled on loads of cinnamon and sugar. <— Gives it that perfect deep fried donut vibe.

This is a quick bread, which means we’re using baking soda and baking powder to give the bread lift, rather than yeast. It’s quicker than working with yeast (hence the name) and less intimidating to new bakers.

Now that I’m thinking about it, I’m wondering how a simple vanilla glaze would be poured over this? Like a glazed pumpkin donut…oh man. This time of year is so dangerous with all the pumpkin treats! 🙂

Wet Ingredients – Just some canola oil and eggs, along with the canned pumpkin.

Pumpkin Puree – You’ll want to use 100% pure pumpkin puree, and not canned pumpkin pie filling which contains spices and other liquids.

Pumpkin Pie Spice – Try my homemade pumpkin pie spice recipe! I use it in all my pumpkin desserts. You can use the store bought kind too, but when you make your own you can adjust the spices to perfectly suit your tastes!

For the donut topping:

Butter – You’ll melt some butter and brush the pumpkin donut bread with it after baking. It’ll help hold the topping in place and give it a richer flavor, like with deep frying.

Sugar & Cinnamon – Mix these up and sprinkle over the bread with the brushed butter to give the bread that crackly crust.

How to Make Pumpkin Donut Bread:

Wet Ingredients: In a small bowl add the pumpkin puree, oil, and eggs. Whisk those up until well combined!

Dry Ingredients: Add all of the dry ingredients including the flour, sugars, spices, baking soda, and baking powder to a large mixing bowl and whisk together until well combined. Stir in the pumpkin.

Bake: Spread the pumpkin bread batter into a prepared loaf pan and start baking uncovered for 60 to 70 minutes, or until a tester inserted in the center comes out clean.

Let the pumpkin donut bread cool for 10 minutes in the pan before removing to a wire rack over a baking sheet to get it ready for the topping.

Donut Topping: You’ll need to melt some butter and then brush it over the top and sides of the loaf of pumpkin donut bread.

Combine some cinnamon and sugar in a small bowl and then sprinkle it liberally over the top and sides until the bread is well coated in the mix!

Serve: After topping the bread you’ll want to let it continue cooling for about an hour before slicing and serving! We like it with salted butter!

How to store pumpkin bread?

Wrap your pumpkin bread in plastic wrap or store slices in a ziptop bag on the counter for 4-5 days.

Can you freeze pumpkin bread?

Yep! Wrap it up well in plastic and then put it in a plastic freezer bag or wrap it in some foil and it will last up to a few months. 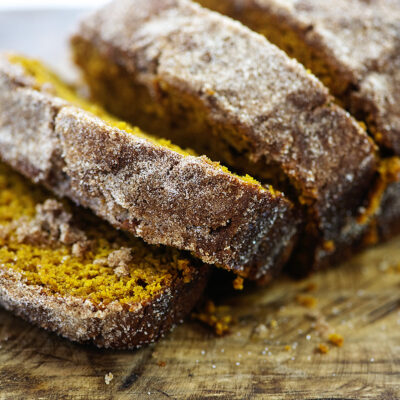 The butter brushed on the outside of the bread gives the bread a rich flavor and helps the cinnamon sugar stick to it, helping mimic the texture and flavor of a cinnamon sugar donut.  This recipe doubles easily – make one loaf for you and one to give to friends or family. Store in an airtight container for 4-5 days at room temperature. To freeze, wrap tightly in plastic wrap and foil and freeze for up to 3 months.

END_OF_DOCUMENT_TOKEN_TO_BE_REPLACED

You’ve got 30 minutes! Make it count with these kid-friendly favs.
END_OF_DOCUMENT_TOKEN_TO_BE_REPLACED

Baby, it's cold outside! And busy inside. Let's keep dinner simple with these crockpot favorites!
END_OF_DOCUMENT_TOKEN_TO_BE_REPLACED