This pumpkin coffee cake is loaded with as much pumpkin as possible making it dense and creamy, almost like a pie!

I went and married coffee cake with pumpkin pie and the result was, well, it was phenomenal.

I like cake just fine, but I absolutely adore the texture of pumpkin pie. The dense, creamy filling is my happy place.

So, I got a little crazy and added a ridiculous amount of pumpkin to this cake in the hopes that I could recreate a bit of that custard like texture while still being able to call it a cake.

Things were very science-experimenty up in here for a while.

I don’t want to brag or anything, but I would totally rock at being a scientist. I mean, seriously. I just completely owned this recipe.

Don’t even bother counting the sticks of butter and cups of sugar in here, because it will make you hate me. Just close your eyes, open your mouth, and enjoy this coffee cake nirvana.

Oh, and just for fun? I went and added a swirl of cinnamon, a crumb topping that gets all crackly and crunchy in the oven to add the perfect contrast to the creamy cake, and a big ol’ drizzle of powdered sugar glaze. I mean, I had to, guys. The coffee cake gods told me and when they speak, you listen.

I used this Saigon cinnamon, because it kicks regular cinnamon’s trash. Give it a try and see what I mean!

Try this one and let me know what you think!

Give my banana coffee cake a try, too!

Never miss out on a single recipe! Follow me below: 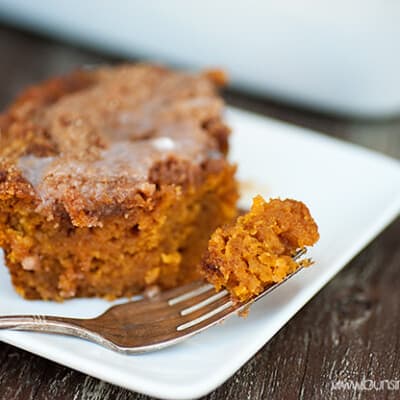 This pumpkin coffee cake is loaded with as much pumpkin as possible making it dense and creamy, almost like a pie!
5 from 1 vote
Print Pin Save Saved!
Prep20 minutes
Cook45 minutes
Total1 hour 5 minutes
Serves 16 servings

For the cinnamon swirl:

For the crumb topping:

This recipe is NOT a traditional coffee cake. It’s more of a cross between a pie and a cake with a dense, almost custard like crumb.

END_OF_DOCUMENT_TOKEN_TO_BE_REPLACED

You’ve got 30 minutes! Make it count with these kid-friendly favs.
END_OF_DOCUMENT_TOKEN_TO_BE_REPLACED

Baby, it's cold outside! And busy inside. Let's keep dinner simple with these crockpot favorites!
END_OF_DOCUMENT_TOKEN_TO_BE_REPLACED