I have an easy spaghetti recipe for you guys that’s cooked in just one pot! It takes an already simple meal and makes it even quicker with less clean up! 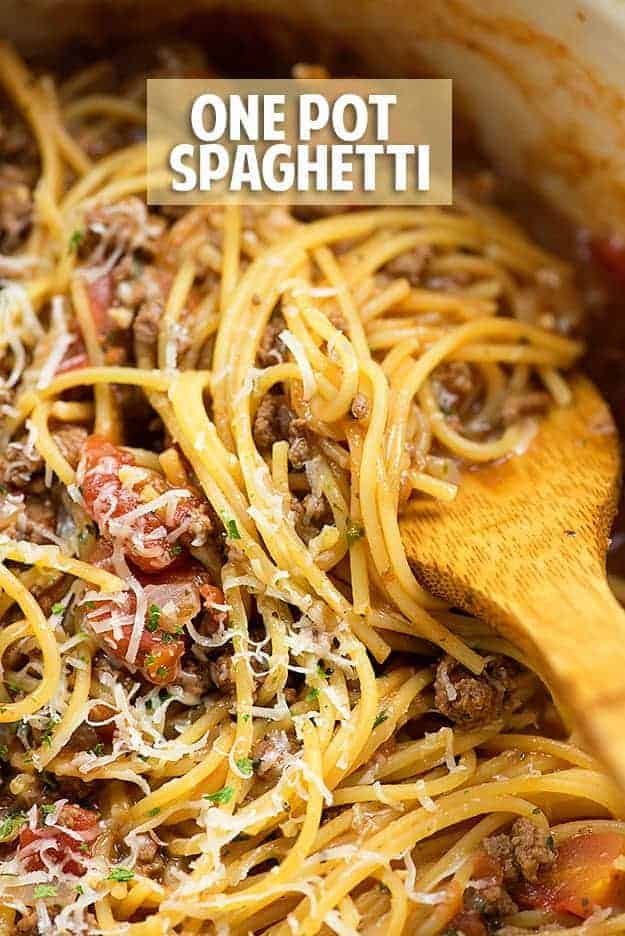 Growing up, spaghetti was always a go to recipe for my parents.

It was actually never one of my favorites, probably because we ate it fairly often.

My parents went with the route of a box of spaghetti noodles, a bit of ground beef, and a jar of spaghetti sauce.

That’s fine. It tastes okay. I’m not needing anyone to spend 30 hours slaving over a pot of simmering tomato sauce, but I just don’t get super excited about that recipe, you know?

My kids, however, LOVE spaghetti and would happily eat it all the time. 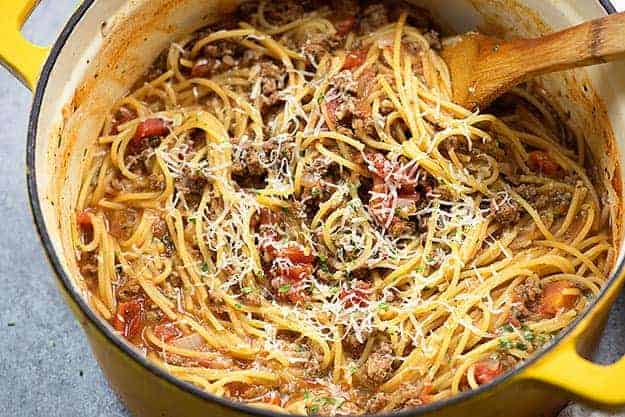 We do a lot of my baked spaghetti. It’s full of cream cheese, cottage cheese, and sour cream. Sounds weird, but it’s so decadent.

I just like to doctor things up, including spaghetti!

But, sometimes you need a really quick easy spaghetti recipe and you don’t want to bust out a jar of sauce or dirty any extra dishes. Totally cool. I get it.

Boiling water for pasta is actually one of my least favorite things to do in the kitchen, which I know is silly. It just seems to take forever when you’re waiting on water to boil.

This spaghetti recipe is extra easy because everything happens in one pot. Don’t you love recipes like that? 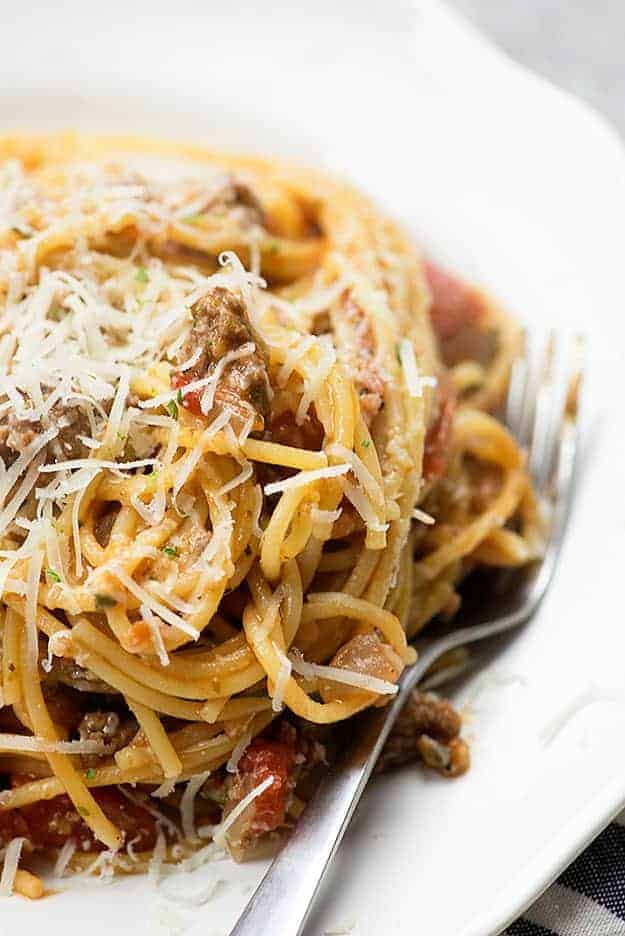 I always use ground beef in my spaghetti, but you can use a mix of beef, veal, sausage – whatever you like.

Onions, garlic, and Italian seasoning add flavor to this recipe. Feel free to add more or less to your personal tastes. I sometimes go way crazy on the garlic. It’s tasty, but we all stink for the next couple of days. 😉

This easy spaghetti recipe is cooked in just one pot for minimal clean up and maximum flavor.

I use canned tomato sauce and canned diced tomatoes to keep things simple. If you have homemade tomato sauce, it should work just fine here.

Dried noodles get added right into the spaghetti sauce and boiled.

I love the way the noodles soak up the flavors of the spaghetti sauce as they cook. It really helps amp up the flavor of the whole dish. 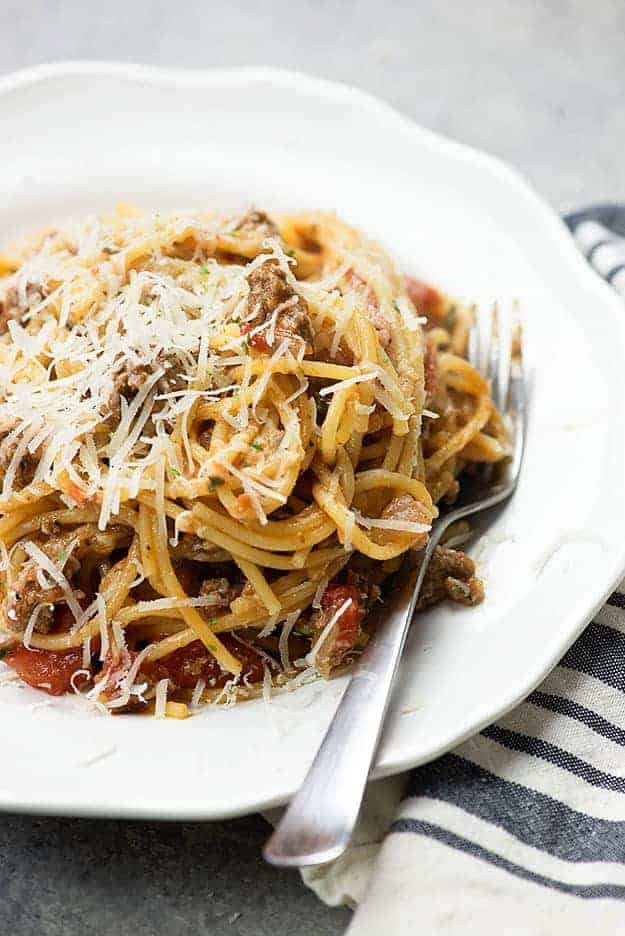 My daughter especially likes spaghetti recipes, because she saw a video on Facebook where a man used a pair of scissors while eating long noodles to avoid having to slurp them up into his mouth.

She now requires scissors on the table at pasta night.

Kids are weird. And pretty entertaining, to be honest.

Anyway, whether you slurp your noodles or not, I hope you enjoy this simple one pot spaghetti! 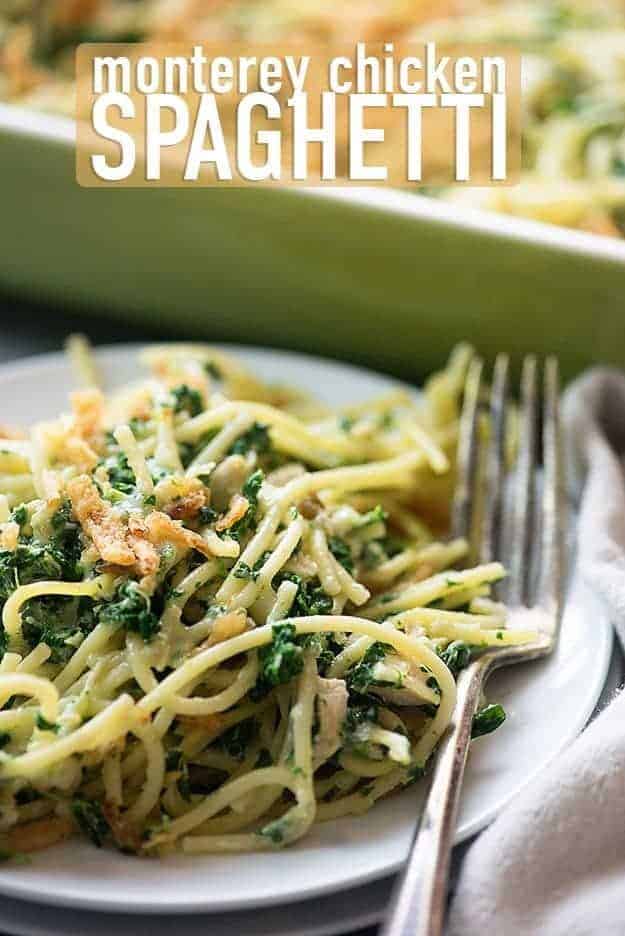 Have you tried my chicken spaghetti? It’s a favorite around here too and it’s full of spinach.

It’s not quite as simple as this one pot spaghetti, but it’s a nice way to use up those boxes of spaghetti noodles you have lurking in your pantry!

If you try this easy spaghetti recipe, I hope you’ll let me know what you think! 🙂 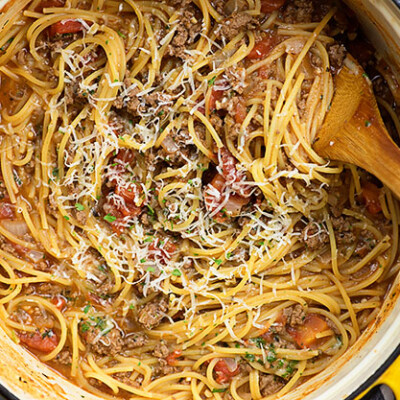 This easy spaghetti recipe is made in just one dish for minimal clean up! I love the way the spaghetti sauce soaks into the noodles as they cook.
4.88 from 16 votes
Print Pin Save Saved!
Prep5 minutes
Cook25 minutes
Total30 minutes
Serves 6 servings

END_OF_DOCUMENT_TOKEN_TO_BE_REPLACED

You’ve got 30 minutes! Make it count with these kid-friendly favs.
END_OF_DOCUMENT_TOKEN_TO_BE_REPLACED

Sweet treats are a must in our house! Check out a few of our best recipes!
END_OF_DOCUMENT_TOKEN_TO_BE_REPLACED