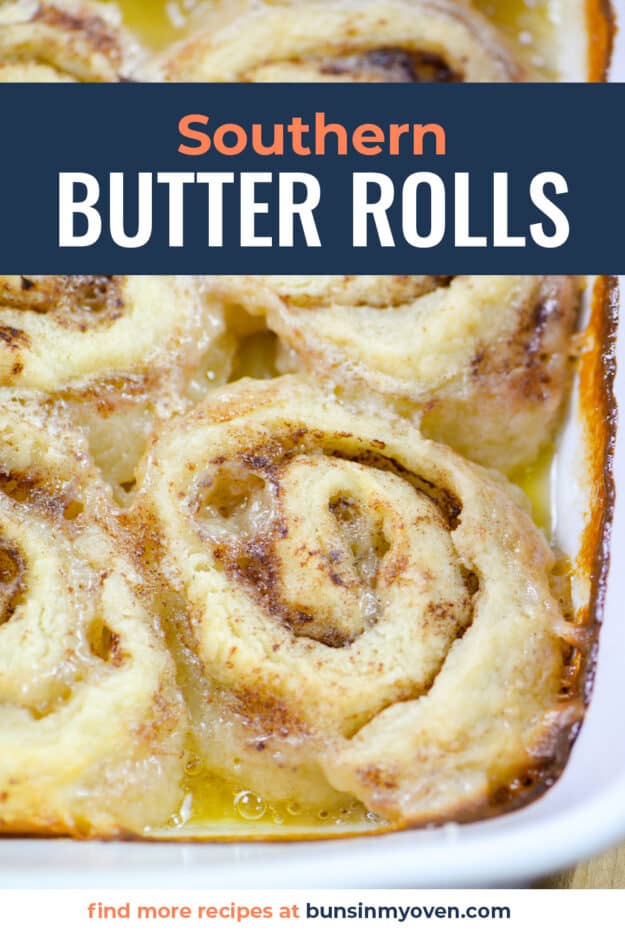 Think cinnamon rolls, but with a simple pie dough instead of a yeast dough and baked in a sweet milky sauce and you’ve got these Southern Butter Rolls!

Have y’all ever heard of Butter Rolls?

They’re a Southern delight – a cross between a cinnamon roll and pie crust, all baked up in a sweet custard that makes for a decadent butter roll that no one can resist.

While we will compare these to cinnamon rolls, they’re made with pie dough and just lightly sprinkled with cinnamon. They get doused in a sweet milk sauce that thickens up into a custard as it bakes. These are NOT traditional cinnamon rolls, but they’re the closed thing I have to compare them to!

Butter Rolls really are a roll of their own and you’ll want to give them a try to see what I mean! Sweet, saucy, ooey, gooey goodness!

While we haven’t tested this recipe with our homemade biscuits or 7 Up Biscuits, that dough may also work. Might be fun to experiment!

Flour – Just some standard all-purpose flour. The dough for these rolls will end up being a bit more like pie crust or biscuit than a fluffy yeast cinnamon roll.

Butter – You will need two sticks of cold butter for making the dough. Along with that you’ll need one and a half sticks of softened butter that will go on the rolls for baking.

Cinnamon & Sugar – For sprinkling on the dough before rolling it up to bake. You can add more or less of the cinnamon to suit your tastes.

Milk – The base of this sauce is milk, either 2% or whole milk.

“I can’t stop thinking about these…. I just asked my husband for these to be my Mother’s Day breakfast!!! I. cannot. wait.” – Ashton

Measuring Cups & Spoons – Essential for pretty much every baking recipe!

How To Make Butter Rolls:

Dough: To begin you’ll add the flour and salt to a mixing bowl and then use a pastry cutter or a couple of butter knives to start cutting in the cold butter. When it forms into coarse crumbs add the cold water and stir. Use your hands to form it into a dough.

Roll: The dough will need to chill for about 10 minutes in the fridge to make it easier to work with. When it has chilled you can sprinkle your workspace with some flour and roll the dough out into a 12×10 rectangle.

Top: Spread the softened butter evenly over the rolled out rectangle of dough, then start sprinkling on the cinnamon and sugar.

Roll & Cut: Roll the dough up, jelly roll style and cut into 12 equal sized pieces. Place into a 9×13 baking dish.

Milk Sauce: Start by mixing up the milk and sugar in a saucepan and heating it until it just begins to boil. Remove it from the heat and then mix in the vanilla extract. When done, pour it evenly over each of the rolls!

It’s going to feel wrong to pour the milk and sugar over the rolls. It’s a thin mixture and you’ll be certain that you’re ruining the rolls, but trust the process and pop these in the oven. The milk sauce bakes up into a creamy custard that the rolls soak up. It really does work!

Bake: Finally you can pop the baking dish into the oven and let it bake uncovered for 30 to 40 minutes, or until the rolls have browned. They’ll need to cool a bit but you’ll definitely want to enjoy these while they’re still warm!

Are butter rolls the same as cinnamon rolls?

Cinnamon rolls are traditionally made with a yeast dough and plenty of brown sugar and cinnamon. Butter rolls are made with a dough similar to biscuits or pie crust. There is only a hint of cinnamon and everything bakes up in a custard. The two are quite different, though they are shaped the same.

Can I use pie or crescent roll dough?

How to store butter rolls?

Store in the fridge for up to 3 days. Rewarm in a low oven before serving. 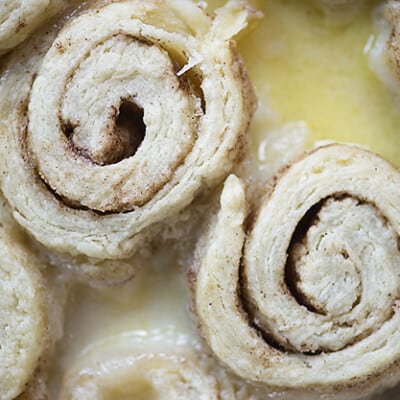 These old-fashioned Southern Butter Rolls turn out ooey gooey and hard to resist! These look similar to a cinnamon roll, but the dough is more like a pie crust or biscuit – no yeast needed!
Print Pin Save Saved!
Prep20 minutes
Cook30 minutes
Total50 minutes
Serves 12 rolls

To make the dough:

To fill the dough:

While we haven’t tested it ourselves, readers have mentioned using store-bought pie crust in place of the homemade dough. Might be fun to try! We just use a light sprinkling of cinnamon for flavor in these rolls. For a stronger flavor, use more cinnamon.

END_OF_DOCUMENT_TOKEN_TO_BE_REPLACED

You’ve got 30 minutes! Make it count with these kid-friendly favs.
END_OF_DOCUMENT_TOKEN_TO_BE_REPLACED

Baby, it's cold outside! And busy inside. Let's keep dinner simple with these crockpot favorites!
END_OF_DOCUMENT_TOKEN_TO_BE_REPLACED