The other day I was binge watching Private Practice on Netflix (What? You do it, too.) when I had a sudden urge to get up off the couch and do something productive.

That urge doesn’t strike often, but when it does, I listen to it.

I could have cleaned the toilets or washed the windows or done any number of chores that I haven’t completed since the start of my latest Netflix obsession, but come on. I’m no dummy. I headed to the kitchen and whipped up some pumpkin oatmeal bars. They took me 5 minutes of hands on time and were out of the oven and in my mouth in 30 minutes.

I used my GE Profile Series Over The Range Oven with Advantium Technology to make these delectable little bars. <— That was a mouthful, wasn’t it? 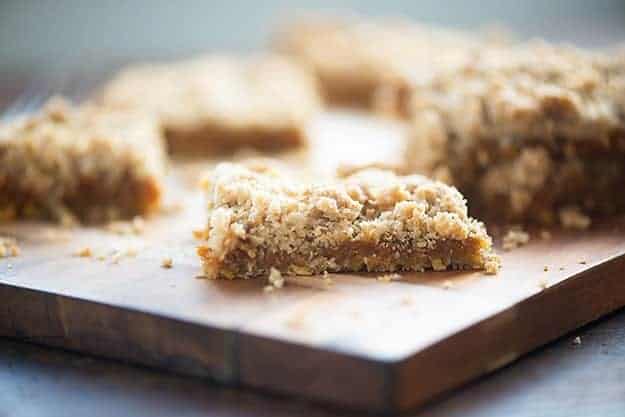 First, you all know that I am working with GE, right? I mean, I talked about it with these cake batter blondies, this s’mores pudding, and my pumpkin donuts. This is the last recipe in the series and it revolves around the “microwave.”

So, little confession: We are not big microwave users. I mean, we use it to heat up leftovers or to make instant oatmeal (And, fine, Easy Mac. We love Easy Mac.), but that’s where it usually ends for us. So, when I was choosing appliances for our new kitchen, I was beyond excited to see that GE goes above and beyond in the microwave department.

What I received from them is not actually “just a microwave” at all. You guys, it’s a true European convection oven. A third oven, considering that I already have a double oven. And it’s utter brilliance. I am obsessed with the thing. Can you even imagine how smoothly my holiday dinners are going to go?

When I made these pumpkin oatmeal bars, the oven was preheated in less than 5 minutes. Things cooked evenly and a bit quicker than they do in my standard oven – these bars, for example, taking just 28 minutes instead of 35 minutes. 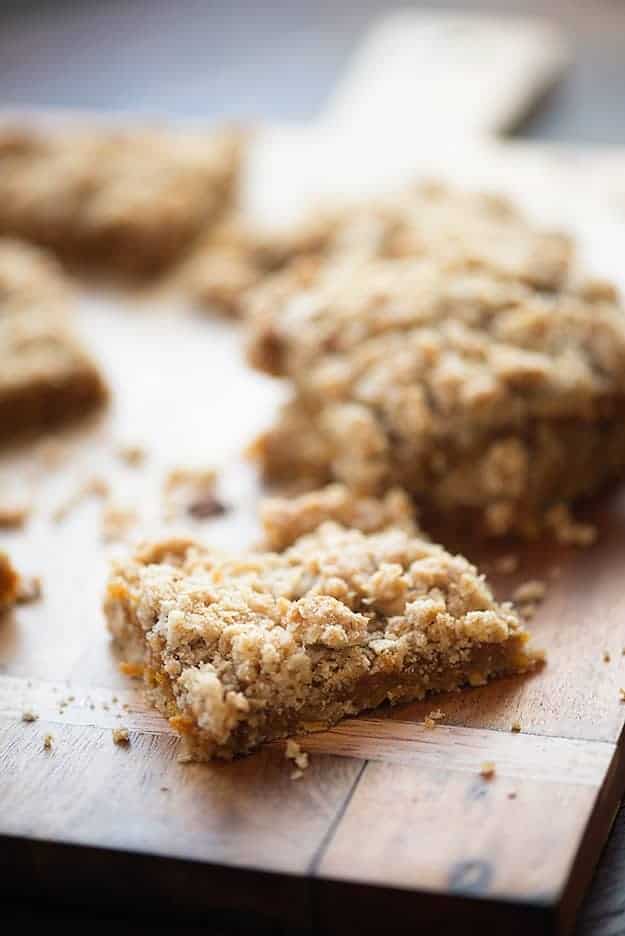 But, that’s so not all. Did I mention the Speedcook functionality? Oh my gosh. You can skip preheating with the Speedcook option – nearly instantaneous heat with halogen light.

This thing promises (and delivers on it’s promise!) to increase cooking time by 2 to 8 times.

Taken from the manual:

The Advantium oven uses breakthrough Speedcook technology to harness the power of light. The Advantium oven cooks the outside of foods much like conventional radiant heat, while also penetrating the surface so the inside cooks simultaneously. While halogen light is the primary source of power, a convection system and ceramic heater assist in the cooking, with a “microwave boost” added in some cooking algorithms. Food cooks evenly and fast, retaining its natural moisture.

The Advantium oven is capable of speedcooking, convection baking, broiling, toasting, warming, proofing and microwaving. The Speedcook feature is the biggest benefit of the Advantium oven. No preheating is required to speedcook. Place the food in the oven and start cooking immediately. Time is saved because there is no preheat and because speedcook cooks faster.

Watch this video and see what it’s all about! A whole chicken roasted in 30 minutes. Biscuits in 6 minutes. Meatloaf in 30 minutes. I just…I love it. And the food comes out browned and moist and not at all “microwaved.”

I am well known for waiting until the main dish is almost done cooking to figure out what we’ll have for sides. Often times, sides take just as long as the main and I’m left scrambling to pull something together quickly. With the Speedcook oven, I can toss in some dinner rolls or scalloped potatoes and get it done in time to still serve my main dish while it’s hot. It’s a life saver. 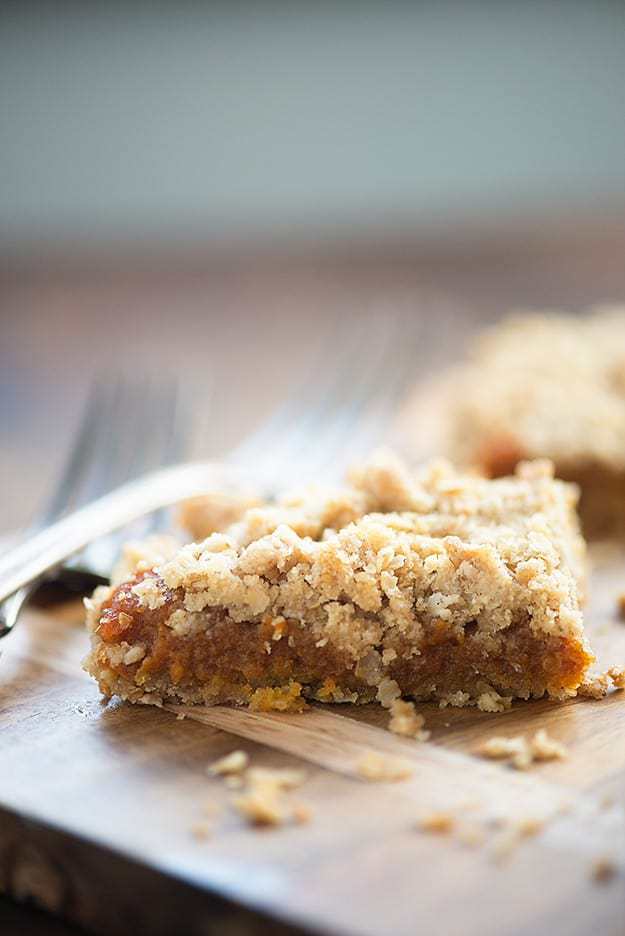 So, I didn’t use the Speedcook technology to make these oatmeal pumpkin bars, because I know not everyone has one of these ovens yet and I wanted everyone to be able to enjoy these. I used the convection oven feature, but instructions below include options for a standard oven as well.

As for these pumpkin oatmeal bars, well, they are amazing. They’re actually a simple riff off of my raspberry oatmeal bars. A reader recently commented on my Facebook page that she had tried the raspberry bars with pumpkin filling instead and I knew I had to do that myself.

The crust is made with oats, brown sugar, and cinnamon, and the filling is just pumpkin, maple syrup, and some spices. You probably have everything you need for these in your kitchen right now!

Keeping in line with speedcooking, the hands-on portion of this recipe is done in about 5 minutes and they’re out of the oven in 30.  Speaking of out of the oven, if you eat them still warm from the oven, you’ll be in total heaven.

I used my food processor to make the oat mixture and it made things super simple. You can use a pastry cutter if you don’t have a food processor, though. 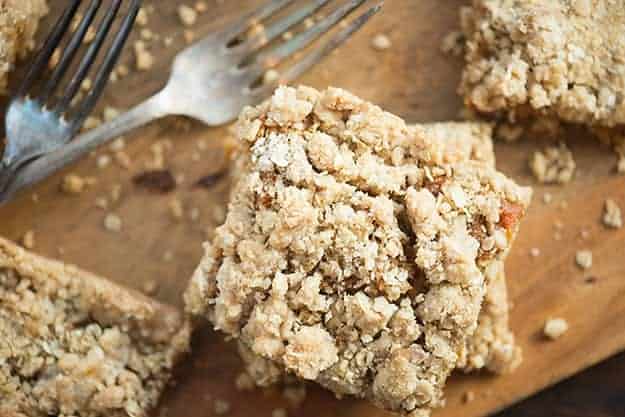 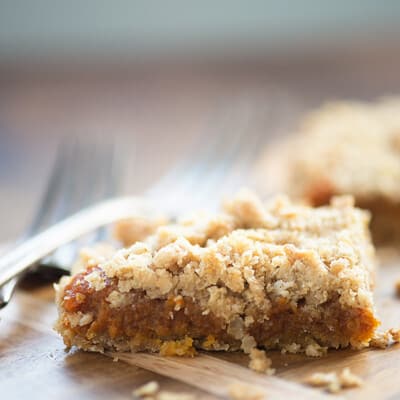 Keeping in line with speedcooking, the hands-on portion of this recipe is done in about 5 minutes and they're out of the oven in 30.  Speaking of out of the oven, if you eat them still warm from the oven, you'll be in total heaven.
5 from 1 vote
Print Pin Save Saved!
Prep5 minutes
Cook30 minutes
Total35 minutes
Serves 9 bars

END_OF_DOCUMENT_TOKEN_TO_BE_REPLACED

You’ve got 30 minutes! Make it count with these kid-friendly favs.
END_OF_DOCUMENT_TOKEN_TO_BE_REPLACED

Baby, it's cold outside! And busy inside. Let's keep dinner simple with these crockpot favorites!
END_OF_DOCUMENT_TOKEN_TO_BE_REPLACED