This penne Alfredo recipe is better than any at a restaurant because of the homemade Alfredo sauce. 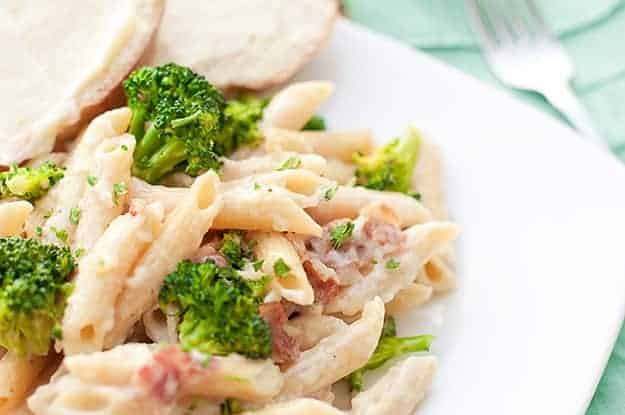 Penne Alfredo With Bacon and Broccoli

There are few things I love more than a good pasta dish. Especially when it’s one with a phenomenal sauce to go with it. That’s why I’m obsessed with this penne alfredo with bacon and broccoli.

It’s restaurant quality flavor, without any of the professional cooking skills needed. You can make it right at home in no time at all. Not to mention, it’s a dish that will please the whole family or really anyone who tries it.

I still remember the first time I had Alfredo sauce. I was at Olive Garden with a friend and she ordered a side of Alfredo sauce for dipping her breadsticks in. I didn’t even know what Alfredo sauce was and (this is embarrassing) I thought it was going to taste like Ranch dressing when I got my first glimpse of it. (Even more embarrassing, this was just about 5 years ago. Oh, how far I’ve come…)

My life changed for the better the moment I licked that luscious cheese sauce off of that soft, pillowy breadstick. 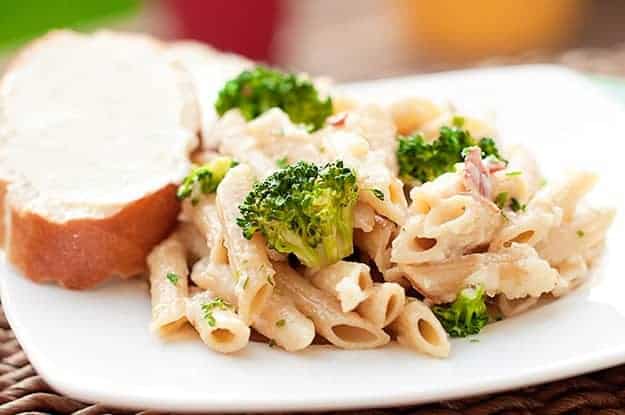 How To Make Penne Alfredo With Bacon and Broccoli

Bring a large stock pot of water to a rolling boil. Boil pasta according to package directions. While the pasta is boiling, fry the diced bacon until crisp, add in the broccoli florets and cook, stirring occasionally until tender-crisp.

Meanwhile, in a small saucepan, add the butter and heavy cream until heated through and butter is melted. Then you’ll add in the parmesan cheese, garlic powder, salt, and pepper. Stir until the cheese is thoroughly melted and sauce is a smooth, creamy consistency.

Drain pasta when done and add to a large serving bowl. Pour in the bacon and broccoli and toss it in with the penne. Pour the Alfredo sauce over top of the penne and stir until well combined. Lastly, serve topped with sliced grilled chicken, if desired.

So many alfredo recipes can be riddled with complicated directions and a crazy list of ingredients that make them a nightmare for anyone who doesn’t know their way around a kitchen very well. The first recipe I tried had an ingredient list a mile long and involved non-stop stirring for thirty minutes straight. It was torture.

Not only did I hate making that recipe, but it also wasn’t even that great. Certainly not worth the long list of ingredients and 30 minutes spent standing over a hot stove.

I pretty much gave up on Alfredo sauce that day. Until, that is, I realized that cooking was fun and that I was pretty good at it. Then I made the simplest, most delicious Alfredo sauce around.

Butter, heavy cream, and Parmesan cheese. That, my friends, is what makes a delicious Alfredo sauce. Well, that and a bit of garlic powder, salt, and pepper. 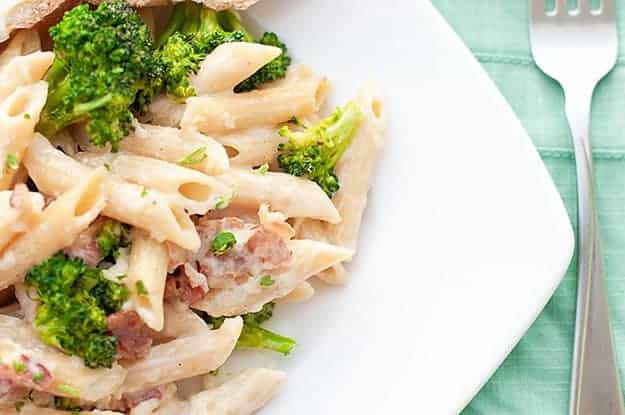 Can I Use Different Noodles?

Keep in mind that the recipe for this sauce is perfect on plain fettucini, but I’ve fancied it up a bit by using Barilla Plus Pasta (seriously, tastes like regular ol’ pasta, but chock full of protein, fiber, and Omega-3s) (this isn’t a paid review or sponsored post, just me sharing what I use in my own kitchen)

You can really make this with just about any noodles you want and it will still be amazing. Especially once you add in some chopped broccoli, and a teensy handful of crispy, fried bacon.

You can also have some fun and switch up the meat as well. Instead of using bacon, try topping it with grilled chicken.

How To Make it a  Vegetarian Penne Alfredo

For anyone who is still a huge pasta lover, but wants a slightly healthier or vegetarian version, you can definitely adapt this recipe to fit those requirements. Make the penne alfredo vegetarian meatless by sauteing the broccoli in olive oil instead of the bacon grease.

Also, replace the bacon with plant-based meat, or just eliminate the meat altogether and enjoy it as a simple dish as just and alfredo with broccoli. 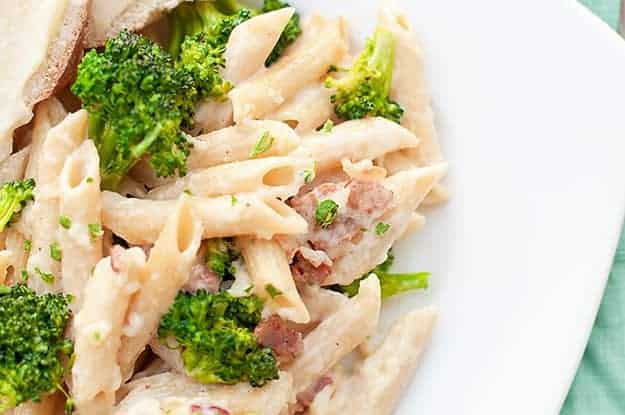 Easy dinners are my friend, so I have them over as much as humanly possible. There’s just no time to get crazy with a bunch of fancy, involved dinners during the week.

Check out a few of the dinners that help me get dinner on the table in no time, while still keeping the whole family happy.

An Alfredo Penne Everyone Will Rave About

I’ve been wanting to share that sauce recipe with you ever since I started this blog. I just kept forgetting not to eat it all before I had a chance to photograph it. Luckily, this time I made enough to feed an army, so once I had my fill I was sure to snap a few photos.

Now that I finally get to share it with all of you, I’m so excited because I know you’re going to fall head over heels in love with it just like me! 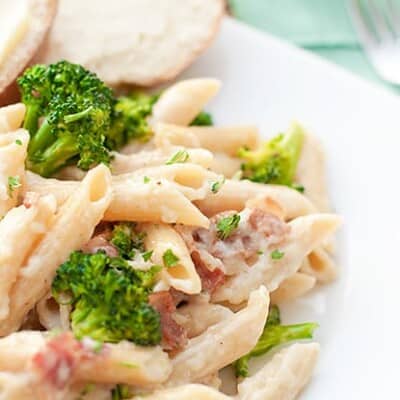 Penne Alfredo with Bacon and Broccoli

Alfredo can only get better with broccoli and bacon added!
5 from 2 votes
Print Pin Save Saved!
Prep10 minutes
Cook20 minutes
Total30 minutes
Serves 4

END_OF_DOCUMENT_TOKEN_TO_BE_REPLACED

You’ve got 30 minutes! Make it count with these kid-friendly favs.
END_OF_DOCUMENT_TOKEN_TO_BE_REPLACED

Baby, it's cold outside! And busy inside. Let's keep dinner simple with these crockpot favorites!
END_OF_DOCUMENT_TOKEN_TO_BE_REPLACED