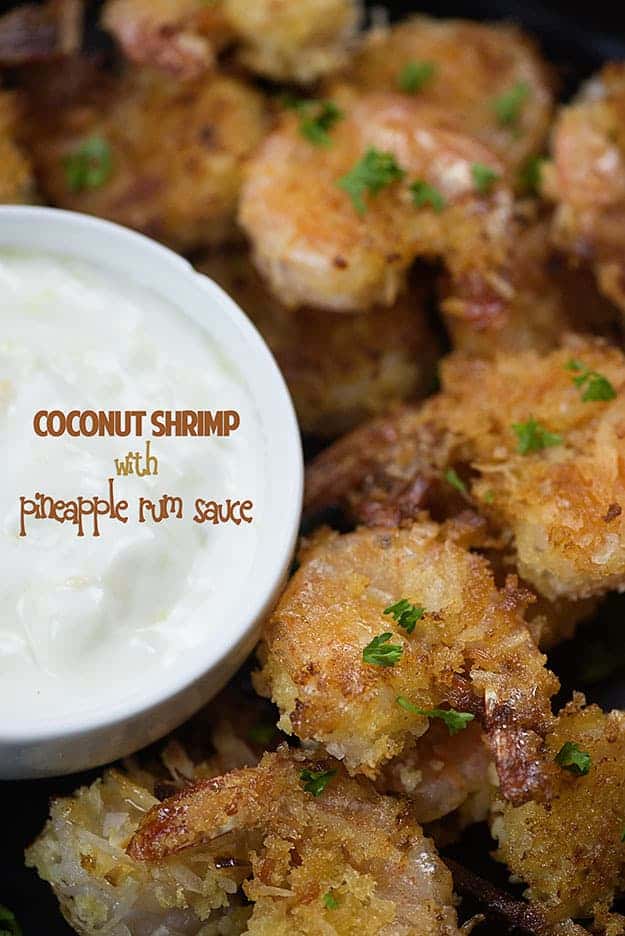 This baked coconut shrimp reminds me a bit of my husband’s favorite alcoholic drink.

I don’t know what the drink would be called or if it even has a name, to be honest.

It’s just raspberry lemonade with a big healthy pour of coconut rum. And by big and healthy, I mean it’s basically equal parts lemonade and rum. 😉 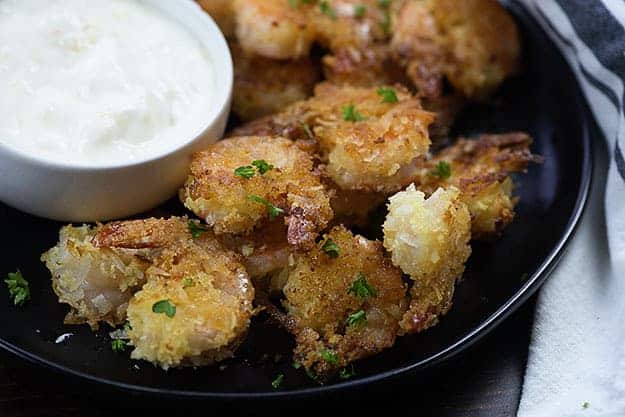 I know that so many people loooooove coconut rum, so I had to create this baked shrimp recipe with a pineapple coconut dipping sauce and oh boy. This whole recipe was SUCH a hit!

I swear, you’ll feel like you’re sitting on a beach, enjoying the warm sunshine and salty air, popping crispy oven fried shrimp in your mouth. This recipe just tastes like summer and I feel like we could all use a little summer right now. 😉 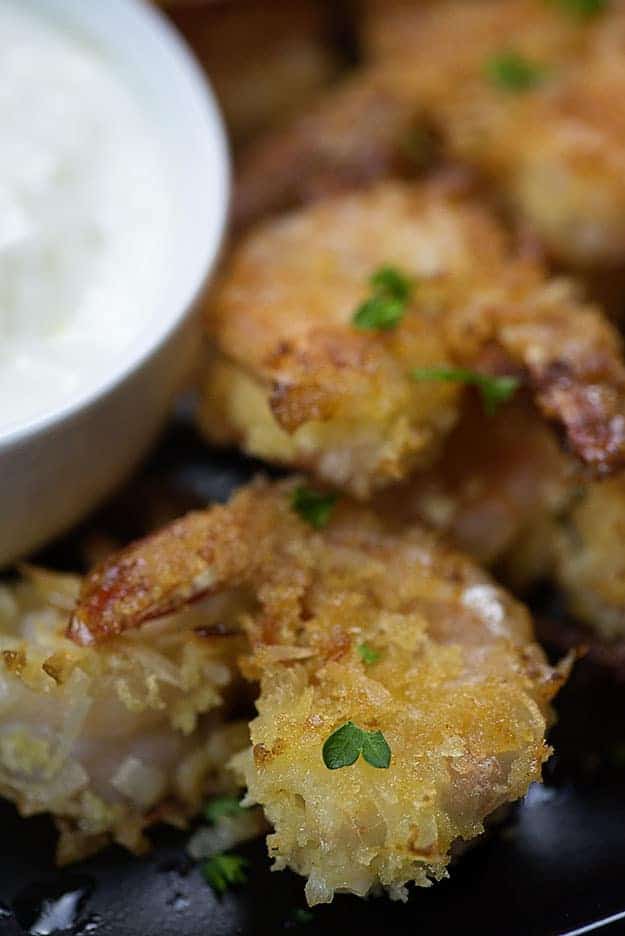 This is such an easy recipe! 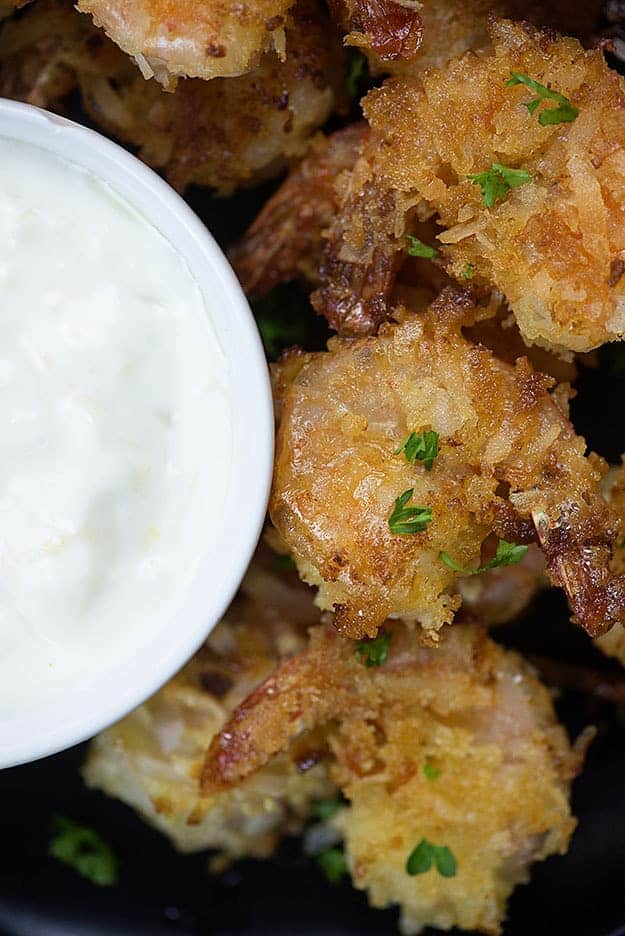 If you don’t have rum or just don’t drink it, use water in place of the rum to beat with the egg.

The shrimp comes out super crispy, and even though it’s baked in the oven, it tastes fried – all thanks to my secret little tip!

When you are baking food that you want to taste fried, melt a stick of butter and pour it on a sheet pan. Put your breaded shrimp (or chicken or fish or whatever) right in the melted butter and bake in a hot oven. It comes out extra crispy and just a bit greasy to give it that fried flavor we all crave.

And it’s a million times easier than frying, obviously. 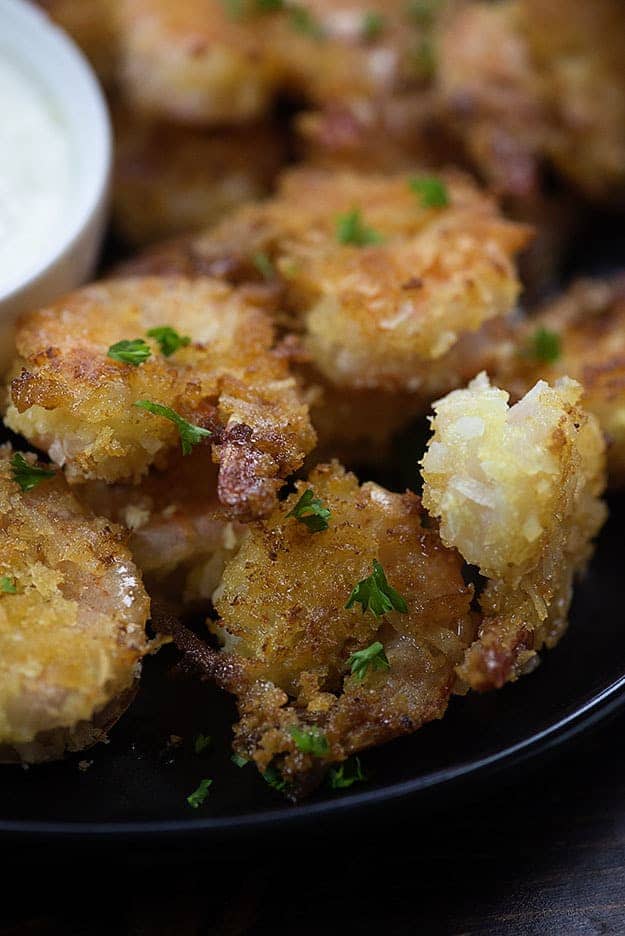 I use that trick in my chicken strips recipe and everyone LOVES them! Serve those with my honey mustard recipe for extra goodness. 😉

The coconut shrimp dipping sauce is super simple to whip up with a handful of ingredients. 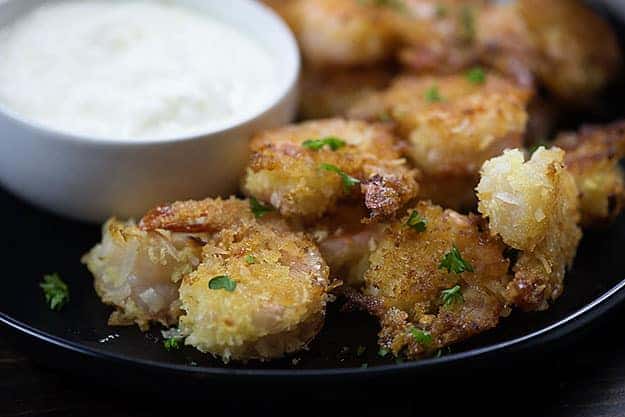 You can 100% skip the rum in this part too if you don’t have it on hand or if you just aren’t into alcohol. Replace the rum with extra pineapple juice for the dipping sauce.

I’ve also served these baked coconut shrimp with sweet chili sauce when I couldn’t get my hands on coconut cream. That was tasty as well!

Serve this with my easy coleslaw recipe and some french fries! Heaven! 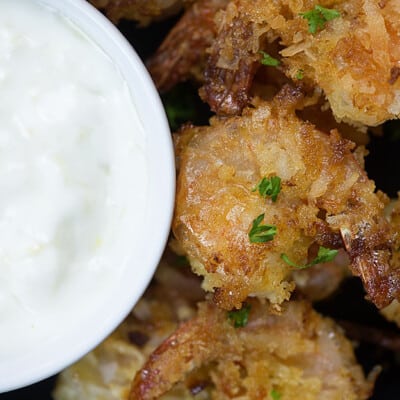 For the pineapple dipping sauce

END_OF_DOCUMENT_TOKEN_TO_BE_REPLACED

You’ve got 30 minutes! Make it count with these kid-friendly favs.
END_OF_DOCUMENT_TOKEN_TO_BE_REPLACED

Baby, it's cold outside! And busy inside. Let's keep dinner simple with these crockpot favorites!
END_OF_DOCUMENT_TOKEN_TO_BE_REPLACED