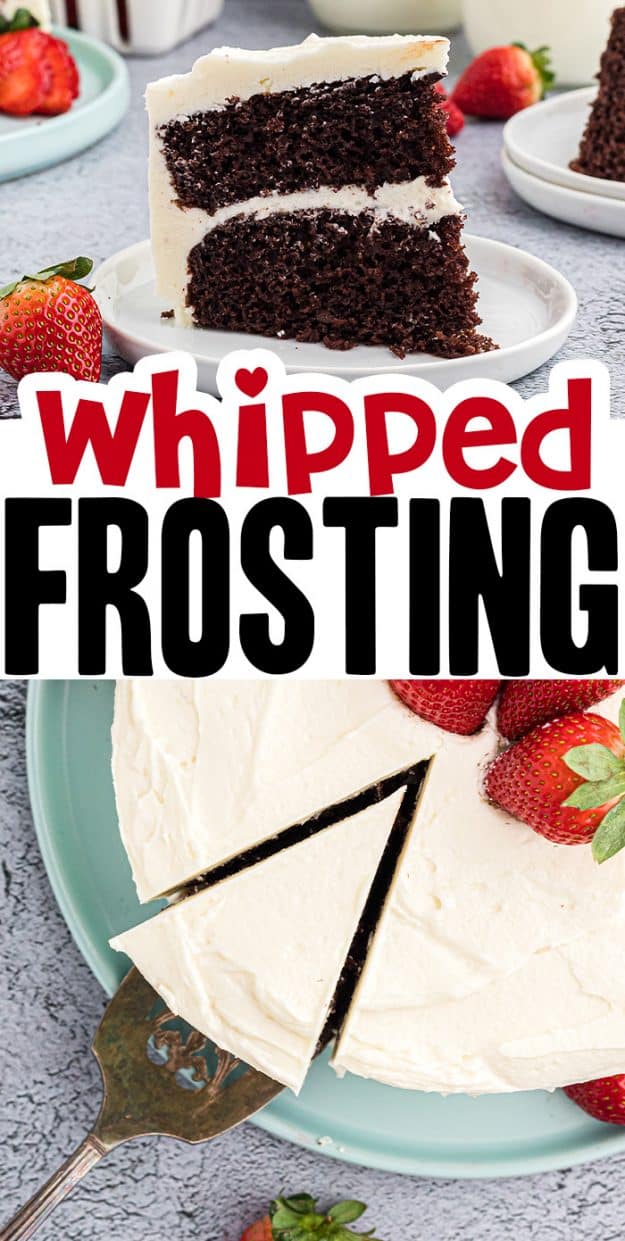 This whipped frosting is a lighter, less sweet alternative to buttercream. It turns out so light, fluffy, and creamy. Perfect for topping cakes and cupcakes.

Sometimes I buy the little mini cupcakes with the big swirl of buttercream frosting and I force my husband to eat them, not because he likes them, but because he always scrapes the frosting off and gives it to me.

I don’t feel bad about eating double the frosting when I’m keeping it from going to waste. 😉

“Made this for my daughter’s birthday cake. Added food coloring while it was in the pot because she wanted a colored frosting. It lightened up once the butter was added; which I suspected. It worked out fantastic! Everyone loved the frosting! This will be my go to frosting! Thank you for the recipe.”
– PF

I am very much a buttercream frosting fan, but I have a few people that I bake for who just don’t like it.

They think it’s too sweet and too rich, so we’ve been using this whipped icing more often.

It’s lighter, less sweet, and oh so creamy and fluffy!

However, I believe it’s proper name is ermine frosting.

What is Ermine Frosting:

Ermine frosting is a cooked frosting that starts with a roux of milk and flour. It’s much lighter than a traditional buttercream that relies on butter and powdered sugar for structure.

It’s light, airy, fluffy, and lightly sweetened. I’d compare it to eating a cloud, but what it really tastes like is the best whipped cream you’ll ever try.

Ingredients: Unlike most American buttercreams that rely mostly on butter and powdered sugar, we’re going to cook this frosting with a bit of milk and flour to thicken it. This will help it to be much lighter and less sweet. You’ll need milk, flour, butter, granulated sugar, and vanilla extract.

Mix: To start making this whipped frosting add flour and milk to a pot over medium heat and whisk together as it heats and thickens. The mixture will begin to thicken up like a pudding or gravy.

Cool: This is a very important step! Once you’ve mixed the ingredients in the first step you’ll want to allow the mixture to cool completely. Pour the mixture into a bowl to cool down.

Moving on to the next step before the mixture has cooled down will cause issues in your frosting coming together.

Beat: While the flour mixture is cooling, beat together the butter and sugar with an electric mixer until light and fluffy. Beat in the vanilla.

Combine: Add the cooled flour mixture to the creamed butter and mix well until the frosting is light, fluffy, and well combined.

Frost: Pile the cooled frosting onto your cake and start spreading. For a thicker, stiffer frosting, refrigerate before using.

This whipped frosting recipe does need to be refrigerated. It won’t do well left out above 70 degrees for long, so be sure to store your cake in an air-tight container in the fridge. 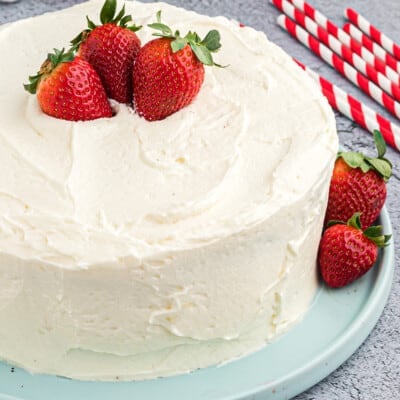 For bright white frosting, use clear vanilla. If you’ll be coloring the frosting, regular vanilla is fine. To color the frosting, add food coloring in when combining the flour mixture and butter mixture.  We use salted butter in this recipe as it’s what we always have on hand. If using unsalted butter, add 1/4 teaspoon of salt to the recipe.

This recipe was originally published in September 2011. The recipe has been changed based on reader feedback and is simpler to make and less finicky. Original photo below:

END_OF_DOCUMENT_TOKEN_TO_BE_REPLACED

You’ve got 30 minutes! Make it count with these kid-friendly favs.
END_OF_DOCUMENT_TOKEN_TO_BE_REPLACED

Baby, it's cold outside! And busy inside. Let's keep dinner simple with these crockpot favorites!
END_OF_DOCUMENT_TOKEN_TO_BE_REPLACED