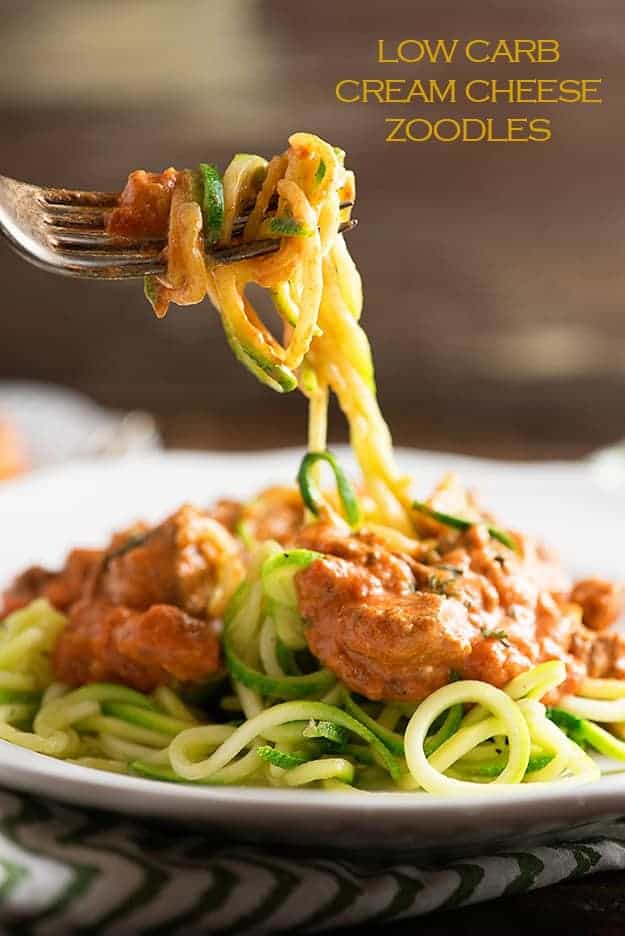 I’m about to show you something weird with a vegetable you guys. Zoodles. Have you heard of them? Better yet, have you TRIED them? Because holy heck, my kids beg me to make them zoodles for dinner and it’s the weirdest thing to ever happen in mah life.

I’ve been on a low carb, ketogenic diet for a bit now and this low carb spaghetti was exactly what I needed a few weeks ago in the midst of a serious pasta craving.

You can buy low carb pasta with zero net carbs, but I’ve been scared. I mean, what are those noodles made out of? I don’t even want to know. But, I do know that a lot of people swear by them. You can find ’em here or you can just make low carb pasta out of the zucchini you grabbed at the grocery store (or picked from your own garden, you show off). 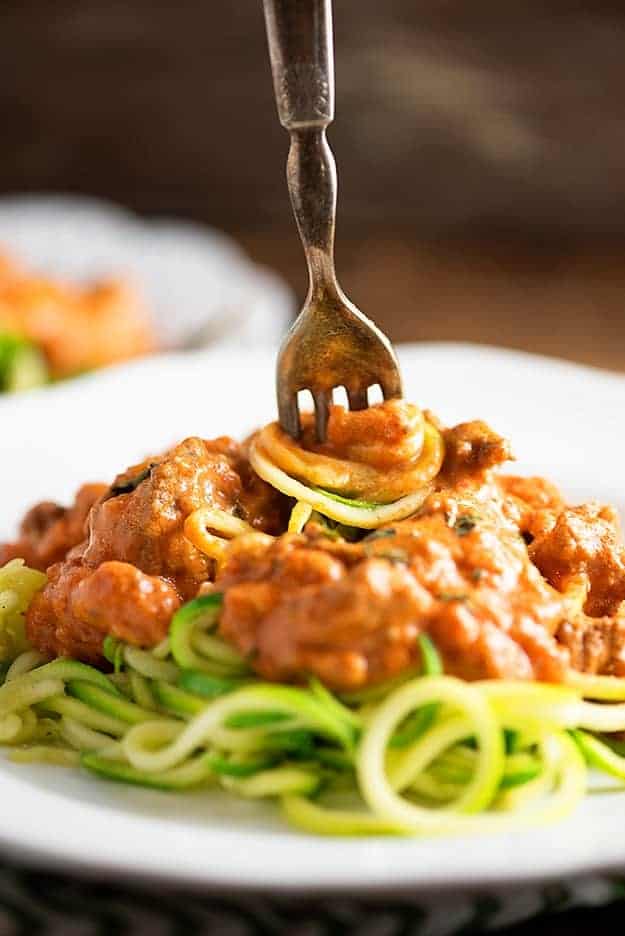 As for a good low carb marinara to accompany this pasta, I totally cheated and used a jar of sauce. I’ve been wanting a good spaghetti sauce, but tomatoes are just naturally high in carbs and when you start adding onions and garlic, things get a little too carby for my keto diet. So, I found Rao’s Homemade Marinara sauce at my local store. It’s only 3 net carbs per half-cup and it’s seriously some amazing jarred sauce. I’m addicted. It’s a bit pricey and I’ve started ordering it on Amazon to save a little money.

If you’re not interested in a jarred sauce and want to get all homemade on me, give I Breathe, I’m Hungry’s recipe a try. I haven’t tried it myself, but it looks amazing! 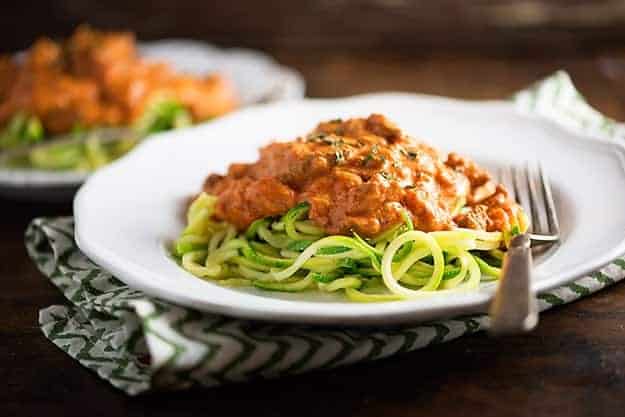 So, now you’re wondering just how exactly you go about making a zucchini into noodles, right? Well, probably not. By this time, most people have seen spiralized veggies, but just in case, I thought I’d better explain. I use a Paderno Spiralizer and I’m super happy with it. It’s fairly cheap, super easy to clean, and simple to work. It gets 4.5 stars on Amazon from nearly 7,000 people. It’s a good choice. 😉  If you’re on a budget, this handheld spiralizer might be a better option. I haven’t tried it myself, but it also has good ratings on Amazon and is less than $15.

Anyway, these Zoodles are super simple recipe that works perfectly for a keto diet. They’re a riff on my creamy baked spaghetti that the whole family begs for every other week. I was super nervous to serve this recipe with zoodles instead of spaghetti, but everyone got seconds and asked for it again a few nights later. That’s a total win, right?

Notes: Nutrition facts displayed below the recipe. The label shown is based off a marinara sauce with 3 net carbs per half cup. Adjust accordingly if you use something different. 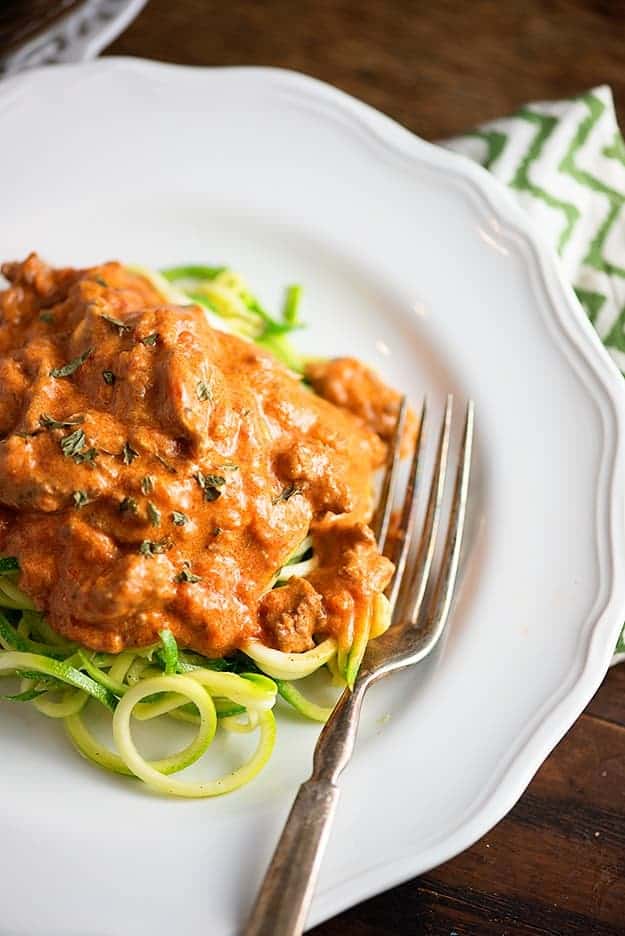 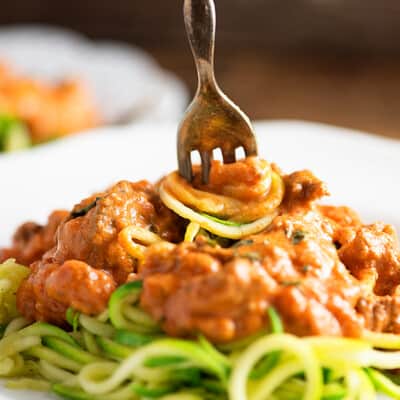 I'm about to show you something weird with a vegetable you guys. Zoodles. Have you heard of them? Better yet, have you TRIED them? Because holy heck, my kids beg me to make them zoodles for dinner and it's the weirdest thing to ever happen in mah life.
5 from 5 votes
Print Pin Save Saved!
Prep15 minutes
Cook20 minutes
Total35 minutes
Serves 6 servings

END_OF_DOCUMENT_TOKEN_TO_BE_REPLACED

You’ve got 30 minutes! Make it count with these kid-friendly favs.
END_OF_DOCUMENT_TOKEN_TO_BE_REPLACED

Baby, it's cold outside! And busy inside. Let's keep dinner simple with these crockpot favorites!
END_OF_DOCUMENT_TOKEN_TO_BE_REPLACED