So. I did something over the weekend. Something ridic.

I, the queen of sitting on the couch, attended an NFL game.

It was mostly only fun because I was a little tipsy the entire time. And because the people I was with were awesome. And because have you seen the types of food they sell at NFL games? It’s some good stuff.

Everyone was shouting “Go Bears” at me. I shouted back “Go hot dogs!” Because hot dogs. And also, too much to drink. 😉

Go Bears! Or whatever. I’m just here for the food.

Also, can I just point out that my husband is pretty much the most adorable person in the world? I love him and his hairy face.

Honestly, I was pretty proud of myself. I didn’t cheer for the wrong team even once. I came close a few times, but I learned pretty quickly to only cheer when the people in the Bears clothes were cheering. Easy enough.

So, anyway, that was a fun weekend and now I’m home and expected to cook my own food and not drink beer at 11am. I figured I’d make up for that fact by loading up some tender little potato pillows (aka gnocchi) with some cheddar cheese sauce and as much pork as I could handle – which happens to be a lot. Go pork! 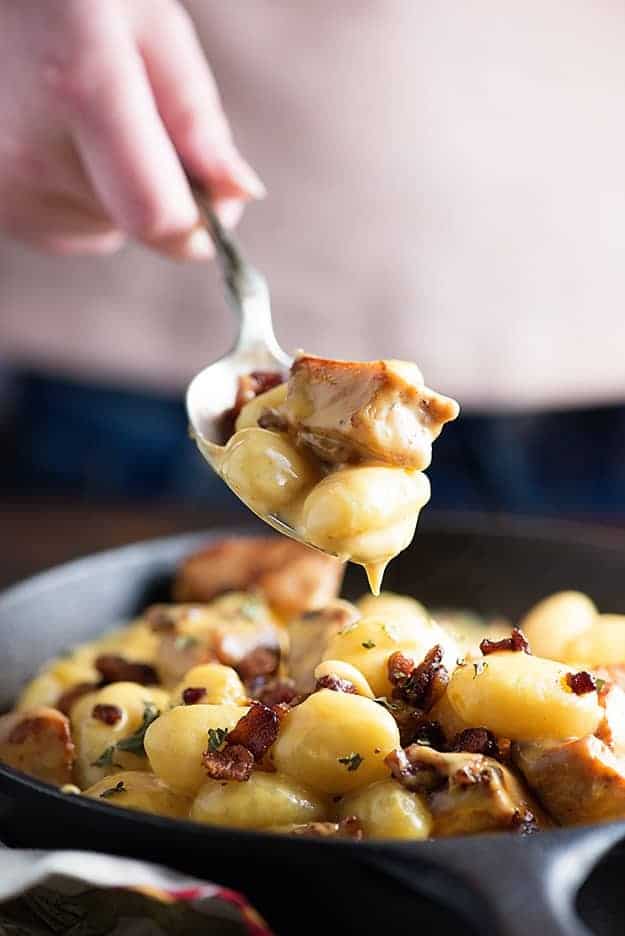 As you know, I’ve been working with Smithfiled this year to share fun ways to use their marinated fresh pork products. I’m really in love with them, because the pork is already perfectly seasoned and you just open a package and go. You can really get dinner on the table in no time. This gnocchi with pork and bacon takes less than 30 minutes, guys.

This cheese sauce is basically just evaporated milk and grated cheddar. It comes together in a flash and doesn’t get gritty or weird. You’ll nail it, I promise.

Be sure to also check out my Pork Milanese and Pork Slow Cooker Chili! Good stuff! 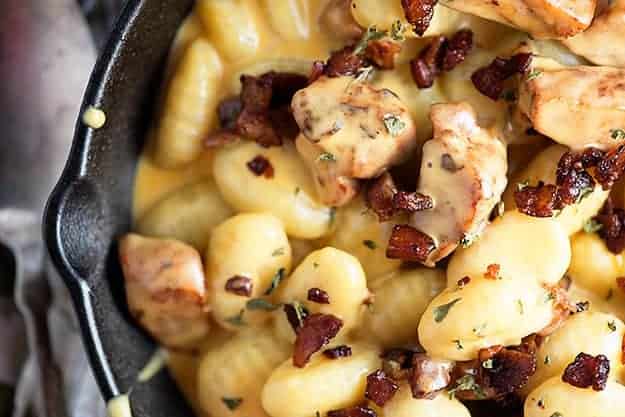 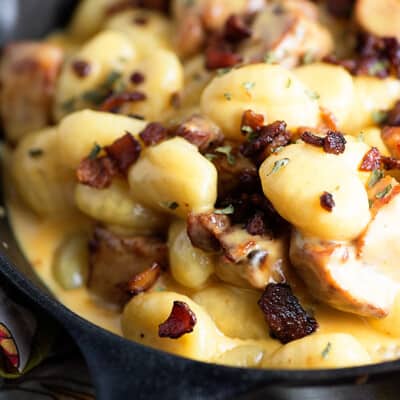 You can really get dinner on the table in no time. This gnocchi with pork and bacon takes less than 30 minutes, guys.
Print Pin Save Saved!
Prep5 minutes
Cook20 minutes
Total25 minutes
Serves 6 servings

END_OF_DOCUMENT_TOKEN_TO_BE_REPLACED

You’ve got 30 minutes! Make it count with these kid-friendly favs.
END_OF_DOCUMENT_TOKEN_TO_BE_REPLACED

Baby, it's cold outside! And busy inside. Let's keep dinner simple with these crockpot favorites!
END_OF_DOCUMENT_TOKEN_TO_BE_REPLACED