This s’mores pie recipe makes a bunch of miniature pies all dressed up for the holidays! Your guests will love being served their own individual pies. Big thanks to DairyPure for sponsoring this recipe.

That magical time of year when the lights twinkle and the snow dusts the ground and the kids are on their best behavior for St. Nick and, oh right, mom and dad are losing their minds in the hustle and bustle of holiday prep.

This year, I’m working with DairyPure to bring you a simple 5 ingredient recipe that will impress your family while still allowing you plenty of time to spend creating memories. ‘Tis the season, after all.

Also, did I mention s’mores? In December? Because I’m making that a thing now. Here in Illinois, it’s definitely too cold to be sitting outside around a campfire this time of year, so I thought it best to bring the s’mores love indoors with this simple 5 ingredient s’mores pie recipe.

I know that people don’t normally think holidays when they hear the word s’mores, but if food blogging has taught me anything, it’s that putting red and green sprinkles on something instantly makes it holiday ready. Seriously. Try it. Instant festivity.

These s’mores pies are miniature, because who doesn’t love having an entire pie to themselves? You could totally make one large pie if you wanted too, though.

You’ll start with the mini graham cracker crusts that you can find in most any grocery store. To that, you’ll add your seriously amazing filling. It’s not pudding, folks. It’s chocolate ganache.

I just went for it, you know?

Anyway, chocolate ganache is such a simple but fancy way to dress up a recipe, so you definitely need this one in your repertoire. It’s just warm heavy whipping cream poured over chocolate (chopped chocolate or chocolate chips both work – as dark as you like!). You’ll stir until the chocolate melts and the mixture is smooth and creamy.

Pour the filling into your crust and pop it all in the fridge for an hour or two. Easy peasy.

Right before serving, you’ll want to top the pies with a handful of mini marshmallows and pop them under the broiler for a couple of minutes to toast the ‘mallows.

Once your marshmallows are all toasty and amazing, dump on the sprinkles. Instant Christmas pie!! 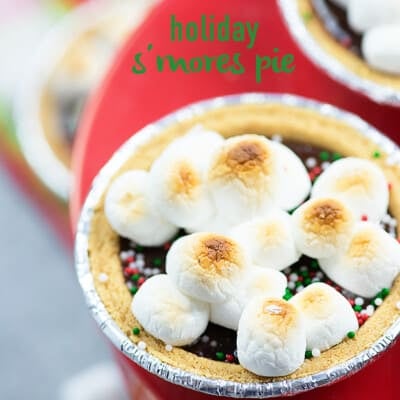 This s’mores pie recipe makes a bunch of miniature pies all dressed up for the holidays! Your guests will love being served their own individual pies.
5 from 1 vote
Print Pin Save Saved!
Prep5 minutes
Cook5 minutes
Total1 hour 10 minutes
Serves 6 servings

END_OF_DOCUMENT_TOKEN_TO_BE_REPLACED

You’ve got 30 minutes! Make it count with these kid-friendly favs.
END_OF_DOCUMENT_TOKEN_TO_BE_REPLACED

Baby, it's cold outside! And busy inside. Let's keep dinner simple with these crockpot favorites!
END_OF_DOCUMENT_TOKEN_TO_BE_REPLACED