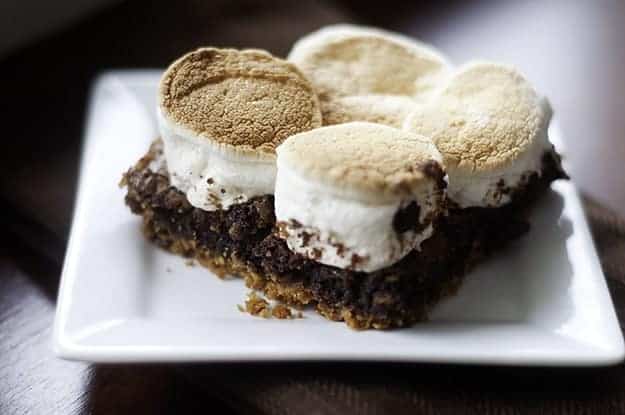 My husband loves to tease me about all of the foods that I’ve never tasted before and then insist that I try it. Meatloaf, meatballs, peanut butter & jelly sandwiches, eggnog, ranch dressing, s’mores, and the list goes on and on and on. He thinks I grew up on a different planet. I think he’s mean. Luckily for him, I also think he’s cute.

Anyway, yes, it’s true. S’mores was one of the many foods that I had never tasted until he introduced them to me. I’m happy to say that my first s’mores happened nearly 7 years ago and I have spent those 7 years eating as many s’mores as possible to make up for lost time.

Sometimes, when I’m desperate, I microwave a s’mores. It’s delicious that way.

When I’ve got more time on my hands, though, it’s fun to come up with fun s’mores treats. These s’mores brownies are super tasty and they were totally easy too. I just made a standard graham cracker crumb crust, dumped on brownie batter from a box mix, and baked until the brownies were done-ish and by that I mean they were still a bit gooey, just the way I like them. Then I topped them with a bag full of marshmallows and popped it all under the broiler. My marshmallows were a bit stale, so they didn’t poof like I wanted them to, so be sure to use fresh ‘mallows for these!

Quick, simple, and my kids were totally impressed. So was I. 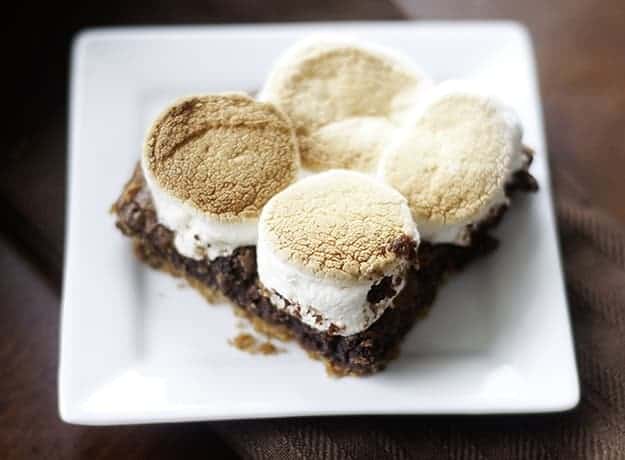 UPDATE: My website appears to have eaten this exact recipe and I can no longer find it. 🙁 Basically, you just place a single layer of graham crackers in the bottom of a 9×13 pan and top with brownie batter (homemade brownies or a box mix). Bake as directed and pull from the oven five minutes before they’re done. Top with marshmallows, return to the oven, and finish baking. Easy peasy!

END_OF_DOCUMENT_TOKEN_TO_BE_REPLACED

You’ve got 30 minutes! Make it count with these kid-friendly favs.
END_OF_DOCUMENT_TOKEN_TO_BE_REPLACED

Baby, it's cold outside! And busy inside. Let's keep dinner simple with these crockpot favorites!
END_OF_DOCUMENT_TOKEN_TO_BE_REPLACED