This CROCKPOT HASHBROWN CASSEROLE is perfect for potlucks! Toss a few ingredients in your slow cooker and end up with creamy, cheesy hashbrown casserole!

I have been on a major slow cooker kick lately.

I love my crockpot in the summer when it’s so dang hot that I dread standing over a stove or turning on the oven.

I love my crockpot in the winter when you just want a warm, cozy meal and your entire house to smell cozy and inviting.

And of course, I love that the slow cooker works by basically letting you dump things in there and walking away. Dinner just pops out like magic, hours later.

It doesn’t really matter why I’m so obsessed with the slow cooker lately. All that matters is that I’ve brought you this crockpot hashbrown casserole, because I love you. And I love cheesy potatoes. And I also love easy recipes that take minimal prep work and totally feed a crowd.

“Another delicious addition is crumbled bacon pieces. Don’t skimp. We’ve made this a couple of times and will be making it again.” – Perry

Combine: My favorite thing about hashbrown casserole is that it is so simple! And the crockpot makes it even easier. Just add all of the ingredients (frozen diced potatoes, sour cream, cream of chicken soup, cheddar, spices) to your slow cooker and stir well to combine.

Cook: When everything is added to the crockpot, just set it on low and forget about it for 4 hours! What could be easier than that? Check to be sure the potatoes are tender or if they need more time. When ready, sprinkle with parsley and serve!

This is great as a side for my turkey meatloaf! Of course, we also make it for holiday dinners – especially when oven space is limited.

Switch things up a bit: 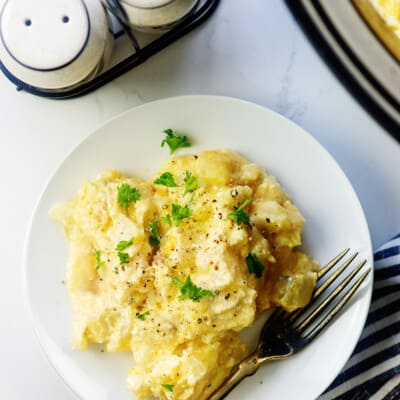 Hashbrown casserole in the crockpot is the perfect holiday side! Free up the oven space and serve up these cheesy potatoes!
5 from 2 votes
Print Pin Save Saved!
Prep5 minutes
Cook4 hours
Total4 hours 5 minutes
Serves 12 servings

You may use any type of cheese you prefer. Cheddar is the usual cheese for hashbrown casserole, but smoked gouda, gruyere, and pepperjack are all nice as well.

This recipe was originally published in June 2016. It was updated with new photos and video in October 2020. Original photo below.

END_OF_DOCUMENT_TOKEN_TO_BE_REPLACED

You’ve got 30 minutes! Make it count with these kid-friendly favs.
END_OF_DOCUMENT_TOKEN_TO_BE_REPLACED

Baby, it's cold outside! And busy inside. Let's keep dinner simple with these crockpot favorites!
END_OF_DOCUMENT_TOKEN_TO_BE_REPLACED