I don’t want to alarm anyone or anything, but I am married to a very picky eater. He has passed his pickiness onto our 9 year old son and I have a feeling that one day soon our 4 year old daughter is going to start proclaiming that everything except for hot dogs and chocolate is GROSS! It’s a sad life to live, I tell you.

The one vegetable that everyone will eat is corn. Corn on the cob or corn off the cob, it doesn’t matter so long as it is yellow and has a bit of butter and salt on it. I’m sure I don’t have to tell you how very boring corn can get after eating it once a day for the past 27 years of my life.

Well, I am through eating boring old corn every single day. 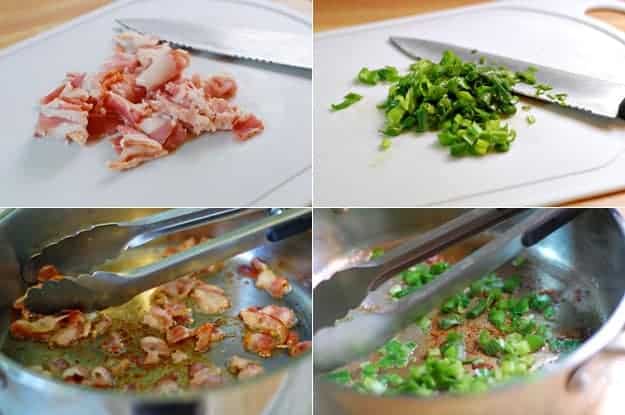 First, chop up six slices of bacon into  bite size chunks. Pop them into a pan and let ’em cook.

While the bacon is frying, dice a couple bunches of green onions. If your family is really picky you can leave these out. You could also use a yellow onion, but there is no way my kids would go for that. As it was, my husband took one bite and said “That green stuff is ONION!” and then he wouldn’t eat anymore. Yes, it’s true. I married a big baby.

After the bacon is nice and crisp remove it from the pan, but leave the drippings. Add in the onion and cook it until it’s nice and soft. 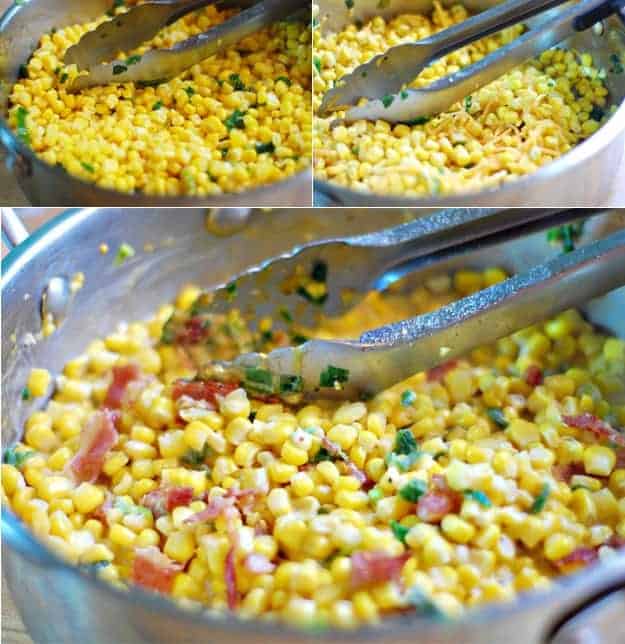 Dump your corn into the pan along with the green onions. I used 2 cans of corn this time, but I normally use one bag of frozen corn. I like the frozen stuff much better than canned. You could also use fresh corn.

Drop in a handful of grated cheddar cheese.

Saute the corn, green onions, and cheese for about 5 minutes, stirring pretty often. Don’t let the cheese burn on the bottom of the pan. You’ll regret it.

After the cheese has melted and the corn is good and hot, go ahead and dump in 1/2 cup of milk, cream, or half and half. I used cream, of course. I’m a bad girl.

Add the bacon back in, give it a stir, and cook over low heat until hot and bubbly. 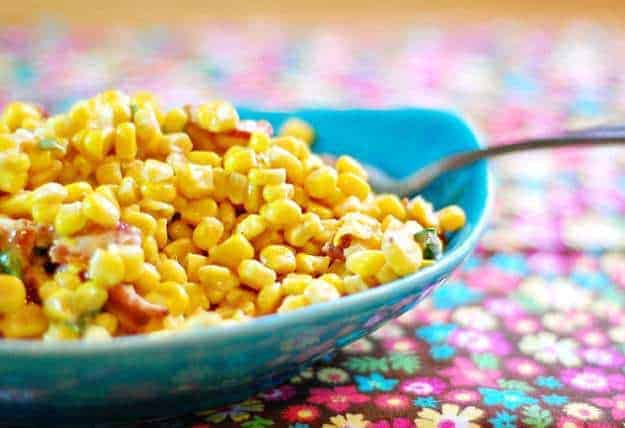 It’s hard to tell from this picture, but the corn is so creamy and delicious. The cheese just kind of disappears into the background and leaves you wondering just what the heck it is that makes this so yummy. The bacon brings a nice smoky flavor to the sweet corn. What I’m trying to say is, go make this. Now.

Corn with Cheese and Bacon

Chop bacon into bite sized pieces and fry until crisp. Remove bacon from pan, but leave drippings. Cook diced green onions in bacon drippings until soft, add corn and cheese to pan. Cook over low heat for about 5 minutes, stirring frequently. Add cream and bacon to pan, stir and cook for about 5 more minutes until hot and bubbly.

END_OF_DOCUMENT_TOKEN_TO_BE_REPLACED

You’ve got 30 minutes! Make it count with these kid-friendly favs.
END_OF_DOCUMENT_TOKEN_TO_BE_REPLACED

Sweet treats are a must in our house! Check out a few of our best recipes!
END_OF_DOCUMENT_TOKEN_TO_BE_REPLACED