Hello, my lovelies. Are you ready for another ridiculous blondie recipe? This one comes from Hayley (also known as The Domestic Rebel). I love Hayley, not just because she makes ridiculous things like these Reese’s Fluffernutter Bars (she has a serious collection of bar recipes on her site!), but because she also remembers to text me when it’s time for Pretty Little Liars to come on TV. And then I start panicking, because I probably forgot to set the DVR and HOW WILL I SURVIVE? In short, Hayley feeds my bad TV addiction and helps me continue living.

Hi guys! I’m Hayley aka The Domestic Rebel and I’m SOOO excited to be posting for Karly today! Karly and I became BFFs recently when our love for butter, her Chicken Tamale Casserole, and sarcasm connected us all magical-like. And I get to meet her this year, so be super jealous (really, I’m hoping she’ll like me. And that she’ll bring me some of THESE because friends do that, right??)

Sorry. That was a really bad joke.

Anywho. As you’re well aware, New Year’s has come and gone and now we’re amongst 2013 which feels kinda taboo since we were like, supposed to all magically die or something on the 21st last year. How anti-climatic, amiriiiite?

I thought I’d wake up on January 1st and feel all refreshed and positive and shiny and new, but I had a headache and didn’t feel any more magical despite the remnants of body glitter still lurking on my skin and clothes.

Almost like a hungover fairy. Not very glamorous, y’all.

And then, I realized that even if I wasn’t shiny and fancy and stuff, I still had the chance to start fresh. So I vowed to do what every person and their mother promise themselves on the first: to eat a healthy breakfast of egg whites and fresh fruit and go for a nice, long run. So I headed home, walked in the door and was detoured by the intoxicating aroma of bacon and proceeded to voraciously eat aforementioned bacon. And then watch a movie.

Noooot exactly eating fruit and jogging, but I soon rationalized that since January is my birthday month, it automatically means January = a holiday and therefore, calories do not count. The world works in mysterious ways, man.

So then I got all mad-sciency and decided to combine two of my favorite foods in all the land: cinnamon rolls and blondies. I have to say, it was an experiment of pure brilliance and the magical body glitter may or may not have had a hand in making these fantastical blondies a little more wonderful (I’m going to say yes, body glitter makes everything wonderful but I’m biased).

These blondies are truly amazing. They’re made with dark brown sugar which enhances and deepens that buttery blondie flavor I love so very much. And swirled throughout, they have an aromatic brown sugar & cinnamon ribbon which plays on that quintessentially delicious cinnamon roll filling. And I need to remind you they’re called Cinnamon Roll Stuffed Blondies because, well, they have actual frosted cinnamon rolls baked inside of them.

These blondies are OUTRAGEOUS. Dear Blondies, let me count the ways I love you: 1) the cinnamon rolls baked inside. Um, awesome. You can taste them in the bottom of these dense, moist blondies; 2) the frosting on the cinnamon roll seeps into the blondie batter, creating this irresistible sugary crunch inside. Heaven; 3) the brown sugar-cinnamon swirl mimics that gooey center of a cinnamon roll everyone loves. When swirled throughout these chewy, perfectly buttery blondies, it’s like eating a cinnamon roll within a cinnamon roll, thus creating the Inception of desserts. You must try!!

Thanks for having me Karly!!! You guys can come hear more crazy stories or get hopped up on sugar anytime over at The Domestic Rebel! 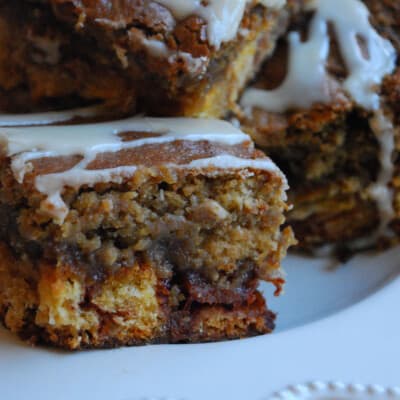 I got all mad-sciency and decided to combine two of my favorite foods in all the land: cinnamon rolls and blondies. I have to say, it was an experiment of pure brilliance and the magical body glitter may or may not have had a hand in making these fantastical blondies a little more wonderful (I'm going to say yes, body glitter makes everything wonderful but I'm biased).
Print Pin Save Saved!
Prep15 minutes
Cook25 minutes
Total40 minutes
Serves 9 servings

END_OF_DOCUMENT_TOKEN_TO_BE_REPLACED

You’ve got 30 minutes! Make it count with these kid-friendly favs.
END_OF_DOCUMENT_TOKEN_TO_BE_REPLACED

Sweet treats are a must in our house! Check out a few of our best recipes!
END_OF_DOCUMENT_TOKEN_TO_BE_REPLACED